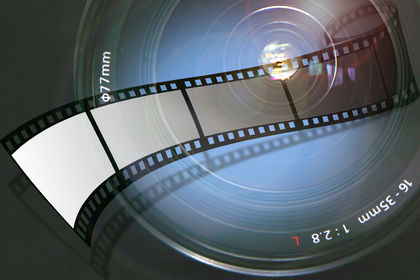 George Eastman took a passion for photography and turned it into a new industry, producing easy-to-use film and cameras for people around the world. Eastman's own inventions fueled his first efforts. He then bought patents from other inventors and hired talented researchers to continue his work. His company's brand name, "Kodak," ultimately came to represent the finest quality in all branches of photography.

"The past and continued prosperity of our company is not due to the value of a patent or an invention. Many competitors make the same kinds of goods we do.… We have to depend upon quality, which requires painstaking research, constant scrutiny, and improvement of the smallest details."

George Eastman was born on July 12, 1854, in Waterville, New York. His father George, a teacher, started a small business school in nearby Rochester. The rest of the Eastman family, which included Eastman's two older sisters, did not settle in Rochester until 1860. Two years later, Eastman's father died, and his mother, Maria Kilbourn Eastman, took in boarders to help pay the family's bills. After seven years of school, Eastman dropped out at age fourteen to work for an insurance company. Ten years later, he became a bookkeeper at the Rochester Savings Bank. His flair for numbers and details carried over to his private life; Eastman kept a careful record of all his expenses and worked hard to save money.

Eastman, however, was not all business. He liked to travel, and in 1877 he planned a trip to the Caribbean island of Hispaniola. A co-worker suggested he take photos of the trip, and soon after Eastman bought his first camera. At the time, photography was still a fairly recent development, and taking pictures was not easy. Photographers had to cover glass slides with a solution of silver and other chemicals; more chemicals were used to develop the image. This work had to be done in the dark, so photographers taking pictures outdoors had to bring along tents.

Early in 1878, Eastman read about a new process that used a dry glass plate instead of a wet one. Although he had never studied chemistry, he began experimenting and created his own dry plate. Biographer Elizabeth Brayer quotes Eastman's reaction to his successful invention: "At first I wanted to make photography simpler merely for my own convenience, but soon I thought of the possibilities of commercial production."

Eastman designed a machine to apply the chemicals to the glass plate, then traveled to London with his invention. He hoped to patent the device there, sell the rights to the patent, and use the money to start his own business. The patent came in 1880, but in the meantime, he received a U.S. patent and began making dry plates in a rented room, while keeping his day job at the bank.

George Eastman paid a little more than $94 for his first camera and photographic equipment. Most of his knowledge about his new hobby came from reading photography magazines.

Eastman's first customers were local professional photographers, several retail stores, and some amateurs. Everyone saw that his process produced affordable, good-quality dry plates. Eastman kept improving his coating machine and turned to local investors so he could grow his business. Henry Strong, a buggy-whip manufacturer, decided to invest in the new technology. He and Eastman became partners, and the Eastman Dry Plate Company opened on January 1, 1881. Eastman left the bank later that year to concentrate on his new business.

The next year, as Eastman made plans to build a modern new factory, he struggled to fix a problem with the chemicals used on the dry plates. After hundreds of experiments and a trip to London, Eastman found the solution, but in the meantime he had been forced to close the factory. Still, the company survived the shutdown, and Eastman continued to look for ways to improve his product. He and his research assistant developed rolls of film on paper, and later, plastic roll film. Eastman also built a small device that would hold the roll film in almost any existing camera.

Eastman had hoped photographers would switch from dry plates to roll film, but not many did. He realized he needed to create a new market for the film by putting cameras in the hands of people who had never taken pictures. The key to this was his company's new camera, the Kodak. Affordable and easy to use, the Kodak was the world's first portable camera. The success of the camera and roll film led Eastman to add "Kodak" to his company's name, and made him one of the most successful business owners in the United States.

With Eastman Kodak's success, Eastman invested in new research to stay ahead of the competition—when there was competition. The company held several key patents, and Eastman was prepared to go to court to protect any challenges to his dominance. He wanted his company to be the world's largest manufacturer of photographic equipment, and he sometimes used questionable tactics to boost sales. Eastman Kodak would not let retail stores sell certain Kodak goods below a set price or carry competitors' products.

Despite his legal problems with the U.S. government, George Eastman eagerly supported U.S. war efforts during World War I (1914-18). He developed unbreakable glass lenses that were used in gas masks, and his company designed a special camera for taking pictures from planes.

Going into the 1900s, Eastman faced a legal challenge to his patent on roll film. Later, in 1913, the U.S. government charged Kodak with being an illegal monopoly. More lawsuits came, and Eastman settled out-of-court on several claims. In 1921, the company agreed to sell several businesses to satisfy

Reproduced by permission of AP/Wide World Photos.
the U.S. government. In public, Eastman seemed upset by the monopoly settlement. In private, however, he had a different reaction. Elizabeth Brayer records his comments to a former Kodak employee: "as a matter of fact, the Company is not likely to be much damaged."

Time for Leisure and Charity

Eastman never married and devoted most of his life to his business. At his factory, he was a tireless worker, but he also found time to travel and enjoy a social life. Eastman hosted and attended lavish parties, and his trips took him around the world. At first, he would leave the company for only a few weeks at a time, but by the 1920s, Eastman's typical vacation lasted six months. The telegraph, and later, the telephone, let him stay in touch with Rochester when important issues arose.

Eastman did not spend his photographic fortunes just on himself. As early as 1886, he made a significant contribution to a Rochester technical college, and his generosity grew as Kodak did. Although Eastman once claimed he did not believe in higher education, he made large donations to the Mechanics Institute of Rochester (later called the Rochester Institute of Technology) and the University of Rochester. Including the money he left in his will, Eastman's total donations to the University of Rochester totaled $50 million. Using the name "Mr. Smith," Eastman gave $20 million to the Massachusetts Institute of Technology (MIT) over many years. He also donated to several colleges for African Americans.

Eastman's philanthropy spread to the arts and social services as well. His donations to the University of Rochester helped build the Eastman School of Music and a medical school. He set up a program in his hometown to provide dental care to needy children, then duplicated the program in several European cities. During the 1920s, Eastman was listed as the fifth-largest individual donor in the United States, and by his death he had given away about $100 million.

By 1924, Eastman had reduced his involvement in Kodak and given away most of his shares. He began looking for new people to take control. "I'm trying to organize it," he wrote in a letter quoted in the Brayer biography, "so people will say after I'm gone that the old man was not the whole thing after all."

George Eastman enjoyed riding bicycles, which were still a relatively new invention when he made his first Kodak camera. He rode to work every day and sometimes took his bike with him on his travels. Eastman thought brakes were dangerous, so he dragged his feet on the ground when he wanted to stop.

In 1930, Eastman began feeling the effects of a nerve disorder, which limited his mobility. By 1932, with his health failing, he committed suicide with a pistol. Eastman had lived a full and rewarding life, giving others joy through his wealth, and through the power of pictures that easily captured memories of life's most important moments.