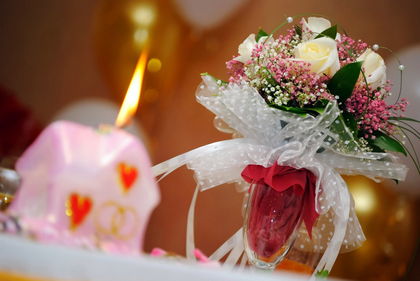 A Vera Wang creation is to the bridal industry what Jaguar is to the luxury car market—both are recognized immediately for their elegance and are unrivaled in beauty and distinction. In 1990, Vera Wang began designing wedding gowns in a small boutique in New York City. Less than a decade later, her business had grown into a retail empire worth an estimated $80 million, and had expanded to include not only one-of-a-kind gowns, but bridesmaid dresses, footwear, eveningwear, a signature fragrance, eyewear, and even fine china and crystal. Along the way, the Wang name came to mean top quality and originality. As the most respected name in bridalwear, and a rising star in eveningwear, Vera Wang's talent lies in her abiding respect for women and their desire to look their best.

Vera Wang, a former ballet dancer and ice skater, majored in art history at Sarah Lawrence College in Bronxville, New York. During college she spent one year abroad, studying at the famed Sorbonne in Paris, where she immersed herself in the country's culture and soaked up French fashion. After graduation in 1971, Wang was hired at Vogue magazine as an assistant. She quickly impressed her bosses and was named the magazine's youngest ever fashion editor in 1972, a post she held for the next fifteen years. Wang left Vogue to fulfill a dream: instead of writing about designers, she wanted to be one of them. In 1987, she got her wish when she was appointed a design director at the fashion house of Ralph Lauren (1939-).

In 1989, Wang was planning her wedding to Arthur Becker and was confounded by the lack of bridal gowns for older, more mature brides—she was forty at the time. Everywhere she went, the dresses were overdone with too many frills and lace; nothing she found was simple, elegant, or even remotely sexy. She ended up hiring a dressmaker to create a custom-made gown, which ended up costing $10,000. Despite the cost, Wang was happy with the dress and the wedding went off without a hitch. Her bridal adventures, however, got her thinking. Since she had such a difficult time finding the right dress, she was positive that other women had similar problems. Wang decided to open her own bridal salon, selling dresses from top designers around the world.

Birth of a Bridal Boutique

With start-up funds of $4 million from her father Cheng Ching Wang, chairman of the internationally known U.S. Summit Corporation, Wang rented a two-story showroom and shop in March 1990. Wang used a quarter of her father's investment to redecorate the boutique, which was located on Madison Avenue in New York City. While the work was being finished, she and her right-hand man, Chet Hazzard, sold wedding gowns from a hotel suite. Hazzard had formerly worked at the Anne Klein design house. In September 1990, Vera Wang Bridal House Ltd. officially opened its doors. Wang's former colleagues at Vogue paid tribute to her with a six-page article, and soon prospective brides were flocking to the boutique.

Wang gained international notice as a designer when she created skating outfits for American champion Nancy Kerrigan (1969-), who skated in both the 1992 and 1994 Winter Olympics. This was a special triumph for Wang, who had skated competitively as a youth and had tried, but failed, to make the 1968 Olympic pairs team. In 2001, Wang commented to Vogue, "I felt as though my life had come full circle; I didn't make it to that level of competition, but my clothes did." Stepping outside bridal wear, Wang launched an evening gown collection in 1994, and by the following year her dresses were sought after by celebrities attending the Academy Awards, the movie industry's top award show. Both Sharon Stone (1958-) and Holly Hunter (1958-) wore Wang creations to the Oscars in 1995, earning considerable notice and acclaim for the up-and-coming designer.

By 1995, Wang's business was bringing in sales of about $10 million, due in part to her growing eveningwear collection. The evening dresses sold extremely well at such upscale stores as Saks Fifth Avenue, Barneys New York, Neiman Marcus, and later Nordstrom, frequently outselling other designers. Spurred by her success, Wang decided to enter the designer bridesmaid dress market. She introduced a collection of nearly three dozen pieces in the spring of 1996, featuring unique fabrics, styles, and muted colors.

Wang's wedding dress designs were an immediate hit with modern brides because of their simple elegance.

In addition to increasing the size and scope of her collections, Wang opened more shops to keep up with a growing demand. Small in-store Wang boutiques were located in Barneys bridal department in both Chicago, Illinois, and Beverly Hills, California; others opened inside bridal marts in Nashville, Tennessee, and Seattle, Washington. Wang's second full-sized bridal boutique opened in early 1996 in Washington, D.C.'s famed Watergate apartment and shopping complex.

By 1997, Vera Wang was everywhere. She dressed a who's who list of celebrities attending such high-profile events as the inauguration party marking President Bill Clinton's (1946-) reelection, the Golden Globe awards, and the Academy Awards. Wang also entered into a partnership with Italian shoe company Rossimoda to develop a line of women's dress shoes to go with her evening gowns and bridal designs. An important element to her footwear designs was a slim platform heel, which made Wang's customers appear taller and slimmer. Wang offered a wide variety of comfortable, stylish shoes in satin, velvet, and suede, as well as specially designed fabric pumps that could be dyed to match wedding or bridesmaid dresses. As she commented to Footwear News in 1997, "It's about the whole picture, not just the dress. The wrong veil can ruin the look, and so can the wrong pair of shoes."

Wang hit a milestone in April 1998 when she presented her eveningwear collection at a New York fashion show for the first time. At a fashion show, various models wear clothes that were created by a specific designer and walk down a raised platform, called a runway or catwalk. The show was a success and Wang's collection was well received by store buyers and fashion critics alike. She then opened her first full-sized boutique inside Saks Fifth Avenue in San Francisco, California, in July. Although Wang had bridal shops within other upscale retailers, this was her first boutique besides the original store in New York City to carry both bridal and eveningwear collections, as well as accessories and shoes. In 1999, Wang signed her second licensing agreement, with the Newmont Group, for leather and furs to accent some of her finest gowns.

Wang's success led to greater social and professional responsibility as well. She turned her fall 1999 show, in Miami Beach, Florida, into a fund-raiser for two AIDS organizations, and months later was elected to the board of the prestigious Council of Fashion Designers of America. In 2000, as Wang's company celebrated ten years in business, two major events took place. The first was an alliance with Unilever Prestige, a division of personal-care products giant Unilever, for Wang to create and market a signature fragrance. The second concerned Wang's store in New York, which would undergo a major renovation while the space next to it, which had been newly acquired, would be transformed into a new boutique featuring her bridesmaid collection, footwear selections, and her growing line of accessories.

Designer Vera Wang believes one secret to her company's success is customer service. Her staff does more than sell gowns and accessories, they offer brides advice on styling their hair, choosing shoes, jewelry, and flower arrangements, and coordinating dresses for bridesmaids.

By 2001, industry analysts estimated that the Vera Wang Bridal House and its shops were selling more than ten thousand custom-made wedding gowns each year, priced from $2,000 to more than $30,000 each. That same year, Wang extended her fashion empire to include eyewear when she signed a licensing deal with the Couteur Design Group and Kenmark Optical to design and sell both sunglasses and frames for prescription lenses. Commenting on the partnership to Women's Wear Daily in June 2001, Wang president Chet Hazzard said: "[This] is an important entry into a new product segment for the Vera Wang brand. Vera never stops with the dress, she is looking at the entire woman and, for her, this is the completion of the look."

Wang's designs were for more than just brides. She designed clothing for everyone from figure skaters to politicians to Academy Award nominees.

In October 2001, Wang's first book, Vera Wang on Weddings was published by HarperCollins. The photo-filled coffee-table book offered advice and tips for the perfect wedding and reception and featured page after page of Wang's most lavish bridal designs. Writing the book was a labor of love, and turned out to be quite difficult. "I have a completely new appreciation for writers," Wang commented to Julee Greenburg of Women's Wear Daily, "This was one of the hardest things I ever did. This project was a way for me to get over my frustrations of not being able to reach those brides who will never buy a Vera Wang gown."

Wang also made plans for another new line of products, one frequently part of a bride and groom's gift registry—tableware and glassware. Signing its first ever licensing agreement, Wedgewood Waterford USA, the premier china and crystal producer, signed with Wang in 2001 to develop a collection of sophisticated tableware, decorative vases, wine glasses, and goblets.

The year 2002 was one of significant accomplishment for Wang. Her company now operated two factories, one in Florida and one in Ohio, along with dozens of boutiques to keep up with the ever widening range of Vera Wang merchandise. Her shoe line had also received a considerable boost. After the original licensing agreement with Rossimoda expired, Wang signed with Stuart Weitzman, one of the most respected names in the footwear industry. In February the designer's long awaited fragrance, Vera Wang, was launched. It arrived at Saks Fifth Avenue in New York on Valentine's Day and was an immediate success. The unique, femininely shaped bottles flew off the counters and shelves, breaking a record for the highest sales of a new perfume at Saks. Prices ranged from $300 for a full ounce to $65 for a smaller spray bottle.

Wang's fragrance line also included bath and body products, what she called "lingerie for the skin," available in an after-bath creme, shimmery body powder, and soap. These ranged in price from $20 to $45. After the fragrance launch came the first Vera Wang eyewear collection, a pricey line available only to optometrists for prescription eyeglasses and sunglasses. Another collection, for sale in luxury retail stores, debuted later in the year.

In February, Wang traveled to Salt Lake City, Utah, to write several articles about the women's figure skating competition in the 2002 Winter Olympics. A few months later, in May, Wang and several others were given a Spirit of Achievement Award by the National Women's Division of the Albert Einstein College of Medicine of Yeshiva University. Also honored were many New York City police officers, firefighters, and paramedics who responded to the World Trade Center disaster in 2001.

On average, four women can work for six months or more on one embroidered custom-made wedding gown designed by Vera Wang. The approximate cost of such a gown is $25,000.

From a bridal boutique in New York to a design empire worth an estimated $80 million, Vera Wang has come a long way in a relatively short time. The energetic designer, however, is far from finished. She would like to develop additional product lines including jewelry, purses, lingerie, swimsuits, athletic apparel, and prom dresses.