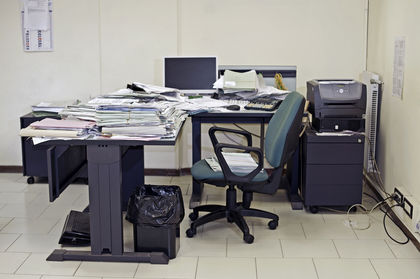 Absenteeism occurs when an employee of a company does not come to work due to scheduled time off, illness, injury, or any other reason. The cost of absenteeism to business, usually expressed in terms of lost productivity, is difficult to determine. Studies from government sources such as the U.S. Bureau of the Census and U.S. Bureau of Labor Statistics put the direct losses at more than $40 billion a year; the Social Security Administration determined that, in one year, workers missed more than half a billion days. Various private studies and polls studying particular elements of absenteeism sometimes put the figure much higher. One recent Gallup poll did not put a price tag on the sniffles and swollen eyes, but claimed that more than 3 million workdays per year are lost when working people stay home because their allergies are acting up. The Massachusetts Institute of Technology released a study in 1994 claiming that clinical depression alone resulted in more than 213 million lost workdays, costing $24 billion.

There is little written history of absenteeism in business literature, probably because until the 20th century businesses had a simple rule, "No work: no pay." The practice of offering paid "sick days" did not become widespread until labor unions forced companies into contracts allowing employees to take time off for illness or vacation. While practices vary among companies and union contracts, an average of four to ten sick days per year is standard.

Although companies were originally unwilling to offer paid leave to workers, they have come to realize that humane absence-management policies are cost-effective. In fact, it is estimated that companies with effective employee absence strategies reduce their overall payroll costs by 10 percent. Furthermore, a 1995 study discovered a correlation between absenteeism and employee turnover. Companies with high rates of absenteeism were found to be more likely to have their employees leave for jobs with other firms. In light of such findings, employers have recognized that a generous absence policy can be profitable and contribute to employee satisfaction and stability.

The problem of absenteeism is addressed directly by some companies, and some handle the situation better than others. One recent study involved a television manufacturer that operated with a lean staff. Every nonsalaried employee scheduled to work was required to be on the floor, or a substitute had to be found. The union negotiated with the company to reduce the number of annual excused absences allowable from 24 days to 18, but allowed some vacation days to be applied toward other forms of absence. Employees with more than 18 absences could be terminated. The company thought that this reduction in absences before termination would show how serious it was about keeping employees on the line, and reduce absenteeism.

After the new contract went into effect there was a 45 percent decline in the number of unexcused absences and a 22 percent drop in excused absences, which was in keeping with corporate intentions. The use of vacation time to compensate for absences jumped 81 percent, however, leaving a net increase of 12 percent in work hours lost to absenteeism. In-creased use of vacation time, which could be taken without advance notice, also caused greater disruption than the use of excused absences, which had to be scheduled in advance with supervisors.

In the next round of labor negotiations, the company secured the elimination of the vacation-day substitution practice. It also told employees desiring to move into different jobs that they must have had a good attendance record the previous year. As an additional incentive, the company also offered a perfect attendance bonus of $200. In the first year of the new arrangement, 127 employees qualified for the bonus; during the previous year only 27 employees had perfect attendance records. The experience of this company shows the importance of understanding absenteeism and the potential abuses of absence-management policies.

Some companies have approached similar problems by eliminating sick leave altogether. Instead of vacation time and sick leave, the companies have developed "paid-leave banks." In one study of 464 hospitals using seven different methods of controlling absenteeism, only the paid leave bank consistently showed a positive effect in controlling absenteeism. This method of absence management is known as the "paid time off system.

Often, companies have halved the amount of time previously set aside for sick leave and added those days to the "bank." At the start of the year employees understand they have a certain number of paid days off work that can be taken for any reason of their choosing. No sick days are allotted. If an employee is legitimately ill and cannot return to work after using all the days in his or her "bank," short term disability payments start. One company using such a policy found its employees' reporting of illness absences dropped by more than 30 percent in one year.

Human resources managers also grapple with problems posed by workers who are chronically absent. The legal right of employers to discipline employees who are chronically absent is firmly established; employers must first, however, make such employees aware of the problem and give them a chance to improve. Some companies have implemented a surprisingly simple solution to the problem of chronic absenteeism: they have the worst offenders counsel each other. In one research study patterned after drug and alcohol abuse programs, a company paired valued employees who had absence problems with each other. If one felt like skipping work, he or she was encouraged to call the buddy to talk it out.

During the study, the employees' absence rates dropped by nearly 50 percent. Once they stopped participating in this absence-intervention program, their absence levels increased, but they remained lower than they had been before peer counseling. Employees who participated in the study found that they could talk freely with each other about the reasons behind their absences. The buddy would help talk through the problem, and encourage the wavering employee to return to work. Absence-intervention programs have also revealed that absentee workers have little idea how much time they were really missing from work. They knew they were taking "too much" time, but until the buddy started tracking it for them, they were unaware of how their absence was affecting the company.

Similarly, companies are increasingly aware that, by understanding the causes of absenteeism, the phenomenon can be reduced to its lowest possible level. Recent research has indicated that rates of absenteeism can be predicted by analyzing an employee's job satisfaction, job involvement, and work stress. Additionally, a worker's family status is a key predictor of absenteeism. Employees with children, particularly single parents, are far more likely to be absent than those without children. As such, future absence-management policies will most likely include the concept of paid time off coupled with improved family health, child care/elder care, and other programs designed to improve the quality of employees' lives and relieve some of their family and other nonwork responsibilities.

McElroy, James C., Paula C. Morrow, and James B. Fenton. "Absenteeism and Performance as Predictors of Voluntary Turnover." Journal of Management Issues 7, no. I (spring 1995): 91.

Steel, Robert P., and Joan R. Rentsch. "Influence of Cumulation Strategies on the Long-Range Prediction of Absenteeism." Academy of Management Journal 38, no. 6 (December 1995): 1616.

Tweets by LechMazur
Also read article about Absenteeism from Wikipedia