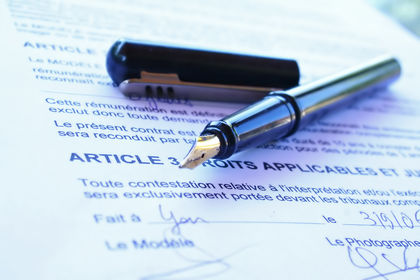 Modern commercial law in the United States evolved from a system of mercantile courts in England that administered a law known as lex mercatoria, or "law merchant." The law was based on the customs of merchants and served to resolve disputes between merchants or between merchants and their customers. The "law merchant" was incorporated into common law tradition in the 18th century, and thus became part of American law.

In the United States a large part of commercial law has been codified in the Uniform Commercial Code (UCC). All 50 states, the District of Columbia, and the Virgin Islands have adopted the UCC as law, although Louisiana has adopted only Articles I (general provisions), 3 (commercial paper), 4 (bank deposits and collections), and 5 (letters of credit).

The original impetus for codification of commercial laws in the United States came in the 19th century from the National Conference of Commissioners on Uniform State Laws, which drafted uniform statutes covering commercial laws and recommended that individual states adopt them as law. Among the statutes they drafted were the Negotiable Instruments Act, approved in 1896, the Uniform Sales Act (1906), the Uniform Warehouse Receipts Act (1906), the Uniform Stock Transfer Act (1909), and the Uniform Bills of Lading Act (1909). When states adopted the UCC, these laws were repealed.

Work on drafting the UCC began in 1942 under the joint sponsorship and direction of the National Conference of Commissioners on State Laws and the American Law Institute. They were assisted by hundreds of practicing lawyers, judges, teachers, bankers, and businesspeople. In 1952 a finished draft was submitted to the states for approval. Pennsylvania became the first state to enact the UCC on April 6, 1953, effective July 1, 1954. The UCC editorial board issued a new code in 1957, and by 1966 48 states had enacted the code. A permanent editorial board monitors changes in business practices and reviews the applicability of the UCC.

While the UCC covers a broad scope of commercial activity, there are areas of commercial law that are untouched by the code. As with all other laws, the UCC is subject to interpretation in the courts. In common law, the doctrine of stare decisis means that decisions that are reached in specific cases serve as precedents for determining future controversies. In the United States stare decisis is a flexible doctrine that serves as a guiding—but not binding—principle that provides stability and a certain measure of certainty, predictability, and reliability to the legal system. In general, then, trial court decisions are not binding upon reviewing courts or any other trial courts.

In addition to the UCC, businesses are governed by numerous federal and state regulations. State laws cover such areas as how to set up a business, how to qualify for and obtain a business license, what types of insurance coverage are needed, and what taxes must be paid. State laws that do not fall within the scope of the UCC vary widely from state to state. Those laws that are based on the UCC, on the other hand, have the advantage of uniformity from state to state, making it easier for businesses and individuals to seek remedies and resolve disputes in different states.

Federal regulations cover interstate commerce and other matters that cannot be covered by individual state laws. Other commercial areas that are covered by federal law include product development, which can be protected by trade secret, patent, trademark, and copyright laws, and product quality, which must comply with product liability law, government regulation of certain types of products, and packaging and labeling regulations. Federal antitrust acts and laws govern business practices relating to mergers and acquisitions as well as pricing and distribution channels. Business advertising must comply with Federal Trade Commission rules and regulations concerning deceptive acts or practices.

As commercial practices continue to evolve, steps have been taken to update the UCC to provide courts with appropriate governing laws. Article 2 of the UCC covers the purchase and sale of goods through contracts and is a cornerstone of modern commercial law. Since it was adopted in the 1950s, however, many changes have taken place in business and society.

With the growth of international trade, it became necessary to have uniformity in the law governing the international sales of goods. The United Nations Commission on International Trade Law developed the Convention on the International Sale of Goods (CISG), which the United States adopted in 1988. Nearly 50 other nations have also adopted it, including most of the major trading nations. CISG supersedes the UCC in a contract dispute between businesses with their principal places of business in different countries that have adopted CISG.

Article 2 of the UCC did not originally cover leases, but for a time the courts applied its principles to disputes involving leases. Eventually Article 2A was written to cover leases and was widely adopted. It was most recently revised in 1990.