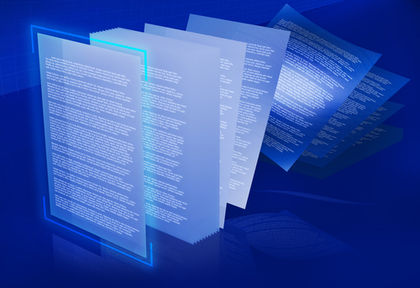 Electronic data interchange (EDI) is the use of computer and telecommunication technology to move data between or within organizations in a structured, computer retrievable data format that permits information to be transferred from a computer program in one location to a computer program in another location, without manual intervention. An example is the transmission of an electronic invoice from a supplier's invoicing software to a customer's accounts receivable software. This definition includes the direct transmission of data between locations, transmission using an intermediary such as a communication network, and the exchange of digital storage devices such as magnetic tapes, diskettes, and CD-ROMs.

Another form of electronic commerce is based on physical media interacting with computers and telecommunications processes. Examples of this third type are facsimile transmission (paper plus telecommunications) and processes that involve information captured by bar coding, optical character recognition, and radio frequency tagging.

Exhibit I shows how EDI contrasts with facsimile transmission (fax) and electronic mail (e-mail). Fax is the transfer of totally unstructured data. With fax, a digitized image of a paper document is transmitted. While mail time delays are avoided, the receiver of a facsimile transmission would not be able to enter the image directly into a computer program without rekeying. E-mail also moves data electronically but is designed for person-to-person applications. It uses a free format rather than a structured format. A party receiving an e-mail purchase order, for example, would not likely be able to automatically read it into an order entry program, and would most likely have to rekey the information.

EDI has two important subsets, illustrated diagrammatically in Exhibit 2. Electronic Funds Transfer (EFT) is EDI between financial institutions. The result of an EFT transaction is the transfer of monetary value from one account to another. Examples of EFT systems in the United States are FedWire and Automated Clearing House (ACH) payments. FedWire is the same-day, real-time, electronic transfer of funds between two financial institutions using the communication network of the Federal Reserve. ACH transfers are batch-processed electronic transfers that settle in one or two business days. An example of an ACH transfer is the direct deposit of payroll offered by many firms to their employees. Using the ACH network, the originating bank sends electronic payment instructions to each receiving bank. Another application of the ACH system is direct debiting, which many consumers use to make mortgage, utility, and insurance payments.

Financial EDI (FEDI) is EDI between banks and their customers or between banks when there is not a value transfer. For example, a firm may receive electronic reports from its bank listing all checks received the previous day. A bank may also send its monthly statement to a firm using FEDI. Some firms send FEDI payment orders to their banks to initiate supplier payments.

To make EDI happen, four elements of infrastructure must exist: (1) format standards are required to facilitate automated processing by all users; (2) translation software is required to translate from a user's proprietary format for internal data storage into the generic external format and back again; (3) value-added networks are very helpful in solving the technical problems of sending information between computers; and (4) inexpensive microcomputers are required to bring all potential users—even small ones—into the market. It has only been in the past several years that all of these ingredients have fallen into place.

To permit the efficient use of computers, information must be highly organized into a consistent data format. A format defines how information in a message is organized: what data goes where, what data is mandatory, what is optional, how many characters are permitted for each data field, how data fields are ordered, and what codes or abbreviations are permitted.

Early EDI efforts in the 1960s used proprietary formats developed by one firm for exclusive use by its trading partners. This worked well until a firm wanted to exchange EDI documents with other firms who wanted to use their own formats. Since the different formats were not compatible, data exchange was difficult if not impossible.

To facilitate the widespread use of EDI, standard formats were developed so that an electronic message sent by one party could be understood by any receiver that subscribes to that format standard. In the United States the Transportation Data Coordinating Committee began in 1968 to design format standards for transportation documents. The first document was approved in 1975. This group pioneered the ideas that are used by all standards organizations today. North American standards are currently developed and maintained by a volunteer organization called ANSI (American National Standards Institute) X12 Accredited Standards Committee (or simply ANSI X12). The format for a document defined by ANSI Xl2 is broad enough to satisfy the needs of many different industries. Electronic documents (called transaction sets by ANSI X12) are typically of variable length and most of the information is optional. When a firm sends a standard EDI purchase order to another firm, it is possible for the receiving firm to pass the purchase order data through an EDI translation program directly to a business application, without manual intervention.

To satisfy users from many different organizations with vastly different needs, the ANSI X12 standards must remain very generic. Some industries have developed their own subsets of the more generic EDI formats. These formats may be considered to be essentially customized formats of the more generic standard EDI formats. For example, the ANSI X12 standard defines two-digit codes for more than 400 units of measure. The automotive industry does not need nearly that many, so their industry convention documentation defines only a handful of units of measure. This makes EDI less confusing for implementers.

Under the auspices of the United Nations, a format standard has been developed to reach a worldwide audience. These standards are called EDI for Administration, Commerce, and Transport (EDIFACT). They are similar in many respects to ANSI Xl2 standards but are accepted by a larger number of countries. In the future, all new ANSI X12 EDI documents will be developed using the EDIFACT format.

When firms first began using EDI, most communications of EDI documents were directly between trading partners. Unfortunately, direct computer to-computer communications requires that both firms (1) use similar communication protocols, (2) have the same transmission speed, (3) have phone lines available at the same time, and (4) have compatible computer hardware. If these conditions are not met, then communication becomes difficult if not impossible. A value-added network (VAN) can solve these problems by providing an electronic mailbox service. By using a VAN, an EDI sender need only learn to send and receive messages to/from one party: the VAN. Since a VAN provides a very flexible computer interface, it can talk to virtually any type of computer. This means that to do EDI with hundreds of trading partners, an organization has to talk to only one party.

One of the most important recent developments in EDI is the use of the Internet as the delivery network for EDI transactions. Since the Internet is so widely available, even most smaller firms have access to and familiarity with the use of browsers. Some service providers are using browser technology to permit trading partners to enter data into forms on web pages. The data can then be translated into EDI format and transmitted to the receiving party. While not strictly computer-to-computer, this process allows a receiver to make greater use of EDI on their side of the transaction.

The fourth building block of EDI is inexpensive computers that permit even small firms to implement EDI. Since microcomputers are now so prevalent, it is possible for firms of all sizes to deal with each other using EDI.

The Bergen Brunswig Drug Company, a wholesale pharmaceutical distributor in Orange, California, is one of the most successful companies in using EDI for many of its business processes. To generate an order to Bergen Brunswig, a customer (pharmacist) uses a handheld bar code scanner to capture the UPC (Uniform Product Code) number on a shelf label for a product to be ordered. The pharmacist enters the quantity desired into a keypad on the scanner and moves onto the next item. All items in the pharmacy can be scanned in only a few minutes. A microcomputer next reads the information contained in the scanner and an electronic order is prepared for the pharmacist's review. The order is sent via EDI to a Bergen Brunswig distribution center where the order is analyzed and resequenced to match the product location in the distribution center. Within five hours, the order is delivered to the pharmacy. Bergen Brunswig has been able to eliminate all order takers, reduce errors to near zero, fulfill orders faster, reduce overhead costs, and build customer loyalty. The company also uses EDI for sending purchase orders to pharmaceutical manufacturers, receiving invoices, and handling charge backs.

The JCPenney Company has an operating center in Salt Lake City, Utah, which uses EDI to receive almost all of its invoices from suppliers. The result has been substantial savings in terms of personnel costs (four processing centers were combined into one and several hundred people who did manual processing were no longer needed), a reduction in errors, faster matching of invoice and purchase order, more timely payments, and a reduction in paper storage requirements.

U.S. auto manufacturers are also extensive users of EDI. Chrysler, as illustrated in Figure 3, has applied EDI to reengineer its manufacturing processes. Once a contract has been negotiated with a parts supplier, Chrysler sends the supplier weekly electronic material releases specifying the intended use of parts over an eight-week horizon. Several days before the parts are needed, Chrysler sends an EDI delivery order to the supplier detailing precisely how many parts are needed for delivery on a certain date, where the parts are to be delivered, what bar coding is to be put on the containers, and when delivery is expected. Some suppliers are told how to sequence the parts on the truck for most effective unloading. After the supplier loads the parts, an EDI advanced shipping notice is sent to Chrysler verifying that the delivery is on the way. Chrysler scans the parts in as they arrive and may send an electronic discrepancy report if there are problems. Payments are often made electronically on a settlement date specified in the contract. No invoice is used in this reengineered process. In this environment Chrysler needs very little inventory and, in fact, has been able to shave approximately $ 1 billion from its parts inventory.

Exhibit 3
EDI in the Automotive Industry

Use of EDI is spreading to many different types of organizations. The insurance industry is beginning to use EDI for health care claims, procedure authorization, and payments. Universities are using EDI for sending grade transcripts, interlibrary material requests, and student loan information. Retailers are sending EDI inventory data to suppliers and charging them with oversight of inventory levels and shipment initiation. The federal government and most states are now using EDI to collect tax filing information.

EDI appears to be entering into a rapid growth phase. According to an extensive market survey completed by the EDI Group, a division of Thomson EC Resources, well over 60 percent of U.S. firms with more than 5,000 employees are using EDI. Over the past several years there has been an enormous increase in the infrastructure supporting EDI, including seminars and conferences, books, periodicals, consultants, and software companies. From its current growth patterns, EDI is poised to become more and more important as a data communication tool that enables organizations to more efficiently design internal processes and external interactions with trading partners.

Ferguson, Daniel M. "Ten Major Challenges an EC/EDI Manager Must Conquer to Be World Class in the Twenty-First Century." EDI FORUM: The Journal of Electronic Commerce II, no. 3 (October 1998): 13-21.