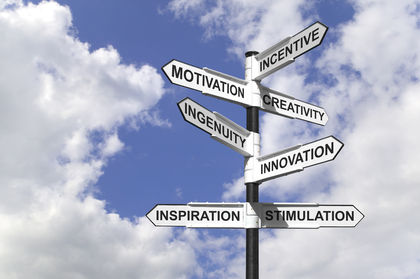 Closely related to employee satisfaction and morale, employee motivation may be considered both an action and a status. The action occurs when management takes steps to foster a work environment where employees are self-driven to perform their job tasks at a level that meets or exceeds management's standards. Employee motivation as a status simply describes the degree to which management succeeds: employees are relatively motivated or unmotivated when measured against one or more performance gauges.

There are a host of competing ideas—among both scholars and lay people—about what motivates workers. Most of these ideas focus on the types of rewards employees derive (or at least expect to derive) from their jobs and, in particular, intrinsic versus extrinsic benefits. Intrinsic rewards are those that stem from performing the work itself. They can include, among other things, feeling important or successful, learning valuable skills, and enjoying the outcomes of completed work (e.g., helping other people, pioneering new technology). Extrinsic rewards, on the other hand, accompany the work process but aren't directly part of it. The most common are financial compensation and benefits such as health insurance and paid time off. Many modern theories of employee motivation emphasize intrinsic rewards as being central to the motivation process, while extrinsic rewards are often seen as necessary but not sufficient.

Mainstream theories about employee motivation have varied greatly over the past century. Early conceptions, sometimes termed "traditional" management theory, assumed that work was an intrinsically undesirable pursuit and that workers naturally sought to do as little as possible. This translated into a sort of carrot-and-stick managerial policy whereby companies tried to maximize motivation by providing adequate compensation as an incentive but also by guarding against any sign of wayward behavior through authoritarian control regimes.

A backlash in the 1940s and 1950s against such policies, which did not always prove particularly successful, emphasized building a conducive social environment in which workers felt valued and respected. This model still maintained management's authority over all critical matters, but attempted to make the workplace more palatable by humanizing it.

Current notions of employee motivation started to take root in the 1960s. Elaborating on the importance of human factors, contemporary theories envision workers as large and often untapped reserves of skills, ideas, and other potential benefits to an organization. The motivation process, according to this view, involves tailoring the work environment and incentive structure to harness as much of this potential as possible. This approach emphasizes granting employees greater flexibility, power, responsibility, and autonomy so that, to some extent, they may shape their own work environments as they see fit, while remaining accountable for both favorable and unfavorable outcomes of their actions.

Some attempts to bolster employee motivation still consider only extrinsic rewards. Endless mixes of employee benefits such as health care and life insurance, profit sharing, employee stock ownership plans (ESOPs), exercise facilities, subsidized meal plans, child care availability, company cars, and more have been used by companies in their efforts to maintain happy employees. Although some experts argue that many of these efforts, if only directed at motivating employees, are just a waste of company money, it is clear that for certain individuals in certain scenarios, monetary incentives can stimulate better job performance—at least for a while.

The debate, rather, has been over whether such material factors have more than a superficial impact on motivation. Many modern theorists propose that the motivation an employee feels toward his or her job has less to do with material rewards such as those described above, than with the design of the job itself. Studies as far back as 1924 show that simplified, repetitive jobs, for instance, fostered boredom and the taking of frequent, unauthorized breaks by those who performed them. In 1950 a series of attitude surveys found that highly segmented and simplified jobs resulted in lower employee morale and output. Other consequences of low employee motivation include absenteeism and high employee turnover, both very costly for businesses. "Job enlargement" initiatives began to crop up in major companies in the 1950s, with one champion of the cause being IBM founder Thomas Watson, Sr. On the academic front, Turner and Lawrence proposed task attributes that characterize jobs that motivate.

Turner and Lawrence suggest that there are three basic characteristics of a "motivating" job:

In 1971 Hackman and Lawler tested these ideas. Using a telephone company as a test site, they surveyed 200 employees to determine relationships between employee attitudes and behavior and the characteristics of the employee's job. The study also assessed whether an employee's reaction to his or her work was dependent upon particular kinds of satisfactions valued by the employee. Positive correlations were found to exist between the quality of an employee's job, with quality jobs meeting the three criteria above, and positive employee attitudes and behavior. Further, "doing well" at a job was interpreted by the employee as having put in a high quality performance, rather than a high quantity performance. Employees felt positively when they had accomplished something they felt was meaningful, and strove to do so if given an encouraging opportunity.

The methods of motivating employees today are as numerous and different as the companies operating in the global business environment. What is the nature of the company and its industry? Is it small or big? What kind of culture is fostered? Is it conservative or innovative? What is important to the employees? What steps have been taken to find out?

The best employee motivation efforts focus on what employees deem to be important. It may be that employees within the same department of the same organization will have different motivators. Many organizations today find that flexibility in job design and reward has resulted in employees' increased longevity with the company, increased productivity, and better morale. Although this "cafeteria-plan" approach to the work-reward continuum presents variety, some strategies are prevalent across all organizations that strive to improve employee motivation.

Giving employees more responsibility and decision-making authority increases their control over the tasks for which they are held responsible and better equips them to carry out those tasks. Trapped feelings arising from being held accountable for something one does not have the resources to carry out are diminished. Energy is diverted from self-preservation to improved task accomplishment. Empowerment brings the job enlargement of the 1950s and the job enrichment that began in the 1960s to a higher level by giving the employees some of the power to expand their own jobs and create new, personally identified challenges.

At many companies, employees with creative ideas do not express them to management for fear of jeopardizing their jobs. Company approval and toeing the company line have become so ingrained in some working environments that both the employee and the organization suffer. When the power to create in the organization is pushed down from the upper echelon to line personnel, employees are empowered and those who know a job, product, or service best are given the opportunity to use their ideas to improve it. The power to create motivates employees and benefits the organization in having a more flexible workforce, using more wisely the experience of its employees and increasing the exchange of ideas and information among employees and departments. These improvements also create an openness to change that can give a company the ability to respond quickly to market changes and sustain a first mover advantage in the marketplace. Minnesota Mining and Manufacturing Co., better known as 3M, has fostered company wide creativity for decades. Its relentless support of new ideas has paid off in profitability and loyal employees who are so motivated that they have the most nimble and successful new product development system in the industry. MCI (now part of MCI WorldCom), too, encourages employees to develop new ideas and take chances with them. A top manager there stated, "We don't shoot people who make mistakes around here, we shoot people who don't take risks."

If employees are given the tools and the opportunities to accomplish more, most will take on the challenge. Companies can motivate employees to achieve more by committing to perpetual enhancement of employee skills. Accreditation and licensing programs for employees are an increasingly popular and effective way to bring about growth in employee knowledge and motivation. Often, these programs improve employees' attitudes toward the client and the company, while bolstering self-confidence. Supporting this assertion, an analysis of factors which influence motivation to learn found that it is directly related to the extent to which training participants believe that such participation will affect their job or career utility. In other words, if the body of knowledge gained can be applied to the work to be accomplished, then the acquisition of that knowledge will be a worthwhile event for the employee and employer.

The number of hours worked each week by American workers is on the rise again and many families have two adults working those increased hours. Under these circumstances, many workers are left wondering how to meet the demands of their lives beyond the workplace. Often, this concern occurs while at work and may reduce an employee's productivity and morale. Companies that have instituted flexible employee arrangements have gained motivated employees whose productivity has increased. Programs incorporating flextime, condensed workweeks, or job sharing, for example, have been successful in focusing overwhelmed employees toward the work to be done and away from the demands of their private lives.

For all the championing of alternative motivators, money still occupies a rightful place in the mix of motivators. The sharing of a company's profits gives incentive to employees to produce a quality product, perform a quality service, or improve the quality of a process within the company. What benefits the company directly benefits the employee. Monetary and other rewards are being given to employees for generating cost savings or process-improving ideas, to boost productivity and reduce absenteeism. Money is effective when it is directly tied to an employee's ideas or accomplishments. Nevertheless, if not coupled with other, nonmonetary motivators, its motivating effects are short-lived. Further, monetary incentives can prove counterproductive if not made available to all members of the organization.

Study after study has found that the most effective motivators of workers are nonmonetary. Monetary systems are insufficient, in part because expectations often exceed results and because disparity between salaried individuals may divide rather than unite employees. Proven nonmonetary motivators foster team spirit and include recognition, responsibility, and advancement. Managers who recognize the "small wins" of employees, promote participatory environments, and treat employees with fairness and respect will find their employees to be more highly motivated. One company's managers brainstormed to come up with 30 powerful rewards that cost little or nothing to implement. The most effective rewards, such as letters of commendation and time off from work, enhanced personal fulfillment and self-respect. Over the longer term, sincere praise and personal gestures are far more effective and more economical than awards of money alone. In the end, a program that combines monetary reward systems and satisfies intrinsic, self-actualizing needs may be the most potent employee motivator.

i think performance of an employee depends not only on qualification,experience & abilities but on willingness to work.