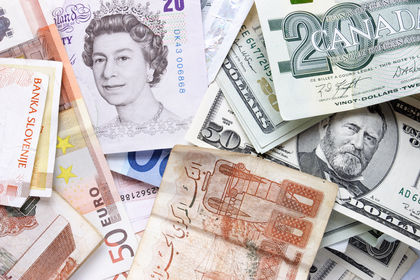 For as long as trade between countries with different currencies has taken place, foreign exchange has been in existence. According to Julian Walmsley, author of The Foreign Exchange and Money Markets Guide, although foreign exchange has existed since before biblical times, a formal global market for foreign exchange did not develop until the 1800s with cable transfers taking place between London and New York.

Historically, governments attempted to set exchange rates themselves to improve a country's trade position. If a country set its exchange rate low relative to others, it could improve the country's trade position by making its exports more affordable and imports from other countries less affordable. Such policies led to trade wars as countries struggled to improve their trade positions. Since the early 1970s, however, most major currencies have been allowed to "float," which means allowing exchange rates to be determined by supply and demand on the currency markets. Most countries still fine tune exchange rates by keeping a reserve of gold or foreign currencies, known as foreign exchange reserves, which they buy and sell to stabilize their own currency when necessary.

The foreign exchange markets are decentralized and consist of thousands of businesses and governments throughout the world that buy and sell currency. Governments have a special interest in foreign exchange because an unstable or rapidly falling price for their currency can create economic disruption. Therefore, governments, or their central banks, intervene in foreign exchange through open market activities, namely, buying or selling of currencies to influence the exchange rate for their own. Other common players in foreign exchange markets include portfolio managers, foreign currency brokers, and commercial banks. Some of these organizations deal in currencies as an investment. Others sell the currency to their own customers, such as multinational corporations, importers, and exporters, who need to convert currency to conduct their businesses.

The largest users of the foreign exchange market are commercial banks, which serve as intermediaries between currency buyers and sellers. Corporations and financial institutions also trade currencies, primarily to safeguard their foreign currency-denonminated assets and liabilities against adverse rate movement. Banks and fund managers trade currencies to profit from rate movements. Individuals also are subject to fluctuating exchange rates, most commonly when a traveler exchanges his/her native currency for a foreign one before embarking on a business trip or vacation.

The foreign exchange market determines exchange rates. When demand for the currency of one country goes up in relation to that of another, the first currency is said to be more valuable (or stronger) in terms of the second currency. Some of the factors that increase demand for a country's currency are an increase in exports (more currency is needed to pay for these exports), an increase in interest rates (the currency now earns more for the holder), and anything that improves political stability (the risk of holding that currency has decreased). Currency markets can also be influenced by indirect indicators of economic strength or even by rumors or anecdotal information.

Currency may be traded either at spot prices (for immediate delivery) or through futures contracts, which are usually paper transactions and don't involve delivery of the traded currencies.

When the Chicago Mercantile Exchange, the world's largest currency exchange market, introduced trading in foreign currency futures in 1972, it enabled all currency market participants, including individual investors, to capitalize on FX rate fluctuations without having to make or take delivery of the actual currencies. Foreign currency futures offer risk management and profit opportunities to individual investors, as well as to small firms and large companies.

There are two types of potential users of foreign currency futures: the hedger and the speculator. The hedger seeks to reduce and manage the risk of financial losses that can arise from transacting business in currencies other than one's native currency. Speculators provide risk capital and assume the risk the hedger is seeking to transfer in the hope of making a profit by correctly forecasting future price movement.

In 1999 the Chicago Mercantile Exchange listed futures and options on futures contracts for trading the following currencies (in dollars): the Australian dollar, the Brazilian real, the British pound sterling, the Canadian dollar, the Deutsche mark, the European Union euro (which is gradually replacing the currencies of member nations), the French franc, the Japanese yen, the Mexican peso, the New Zealand dollar, the Russian ruble, the South African rand, and the Swiss franc. The exchange also lists cross-rate futures in the Deutsche mark versus the yen and the British pound versus the mark.

Chicago Mercantile Exchange. How to Get Started Trading CME Currencies. Available from www.coie.com/market/cfot/howto .