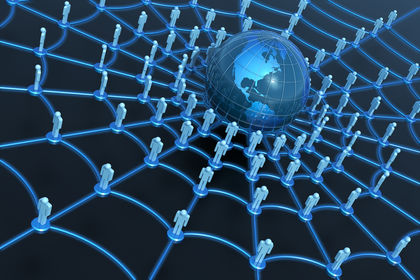 There are competing definitions of globalization, some favorable and others less so. From the perspective of business, it is a process of worldwide economic integration. A more broad perspective describes the process through which culture is diffused throughout the world as a result of various forces including trade, travel, and communications. In some cases, the term is often used without clear definition. For example, Ramesh Diwan, professor of economics at Renssalaer Polytechnic Institute, says, "Globalization has become a buzz word." He continues, "Like other similar buzz words, such as sustainable development, it is rarely defined but used to promote arguments favoring business interests." Therefore, an introduction to the topic requires a working definition.

The Turin European Council calls economic globalization one of the major challenges facing the European Union. The Council defines globalization as a process of worldwide economic integration based on three forces:

Businesses want to know what it means for a company to globalize, and they ask several kinds of questions. First, is there something fundamentally different about doing business globally as compared to established business practices? Second, will globalization require different practices in the future as compared to today? Third, what products and services will firms need as they globalize?

THE FORCES BEHIND GLOBALIZATION

Business firms want to globalize in order to expand their markets, increase sales, and increase profits. Free trade agreements facilitate those activities and promote economic globalization. Such agreements vary in scope. Some are bilateral such as the U.S.-Canada Free Trade Agreement and the U.S.-Israel Free Trade Agreement. Others are multilateral and regional such as the North American Free Trade Agreement (NAFTA), Mercosur (including Argentina, Brazil, Paraguay, and Uruguay as full members and Chile as an associate member), and the 18-member Asia Pacific Economic Cooperation Group (APEC). The European Union (EU) goes further by creating a supranational government. And the World Trade Organization (WTO) includes more than 120 nations from around the world. These agreements and organizations are facilitating economic integration on a regional and worldwide basis.

Trade agreements facilitate the activities of major companies. For example, Ford Motor Company is working to create a "world car" that can be sold and used throughout the "global village." Trade agreements facilitate distribution systems, franchising, joint ventures, and other cross-border collaborations between and among businesses. Coca-Cola and Pepsi-Cola are sold in hundreds of countries throughout the world. Franchises for McDonald's hamburgers, Pizza Hut, Subway, Burger King, and others carry U.S. trade names as well as U.S.-style fast foods (and fast eating styles) throughout the world.

One of the major forces facilitating such globalization is the expansion of communication systems. During the final decades of the 20th century, the Internet globalized communications. One document can be distributed throughout the world in seconds. Using computer software, that document can be converted quickly to various languages for use almost anywhere in world. Telecommunications systems allow radio and television transmissions to be broadcast throughout the world within seconds. For example, the Cable News Network (CNN), based in the United States, produces 24-hour news broadcasts that can be seen around the world by traveling businesspeople and others. CNN's 24-hour coverage of the Persian Gulf War in 1991 established the network as one that serves global audiences. It is not viewed as "foreign" when it broadcasts to and from countries other than the United States.

There is no established definition of the "global" business, but it is helpful to look at companies that operate on a worldwide basis to try to identify characteristics that show how their outlook and operations are global. One group of researchers identified and studied how the following large companies are responding to the forces of globalization: Banque National' de Paris; Canon; CSX; Electrolux, JCB; Pirelli; Royal Trust; TNT Express Worldwide; and Waste Management, Inc. That study identified four common characteristics of global companies. First, activities such as marketing, manufacturing, logistics, and research and development are approached based on a holistic, worldwide plan. Second, the global company does not confine itself within boundaries; its headquarters is, ideally, transparent to customers. Third, global business adjusts its business to meet the needs of local customers; cultural diversity and understanding are crucial. Fourth, the company strives to balance an integrated, global system with the need to be sensitive to local needs.

The automobile industry provides excellent examples of the globalization of business. Toyota (a Japanese firm) manufactures its Camry model in the United States. Major U.S. automobile firms have all formed alliances with Asian or European firms. GM is allied with Toyota and Saab; Ford has alliances with Mazda, Jaguar, and Volvo; and Chrysler has joined forces with a European company to become Daimler Chrysler.

THE RESULTS OF GLOBALIZATION

Globalization has various effects, some positive and some negative. One effect is that it promotes greater cultural homogeneity. Common demands, common consumer preferences, and large bodies of common information can (sometimes unfortunately) lead to the blending of cultures and the erosion of cultural differences.

A second effect of globalization is that it changes the role of government. For example, as individual nations join the European Union (EU), they give up certain powers of law that previously belonged to individual national governments. As EU nations agree to a common currency (the Euro) and defer to the judgment of the European Court of Justice on matters covered by EU law, they give up certain aspects of individual sovereignty. Yet, at the same time, globalization does not eliminate the need for government. Rather, according to Claude Smadja, managing director of the World Economic Forum, it is forcing governments to redefine their role at the national level. Governments must strive to formulate and implement policies that facilitate economic activity, and they must provide citizens with education and skills needed to function in a global economy. Smadja asserts that governments must strive to provide a counterbalance to the negative effects of globalization—insecurity resulting from an emphasis on speed, flexibility, and permanent change. Governments must work to prevent social instability and political backlash.

A third effect is that increased industrialization resulting from economic globalization leads to environmental pollution. These effects are illustrated by massive environment problems along the U.S./Mexican border. But such problems are found throughout the world, especially in developing nations. As a result, many environmentalists actively oppose trade agreements such as NAFTA and trade organizations such as the WTO and APEC.

A fourth effect is that globalization increases the gap between the rich and the poor. This gap is especially pronounced in Latin America. In the late 1990s, there was a severe food shortage in Argentina, and many Argentinians relied on the government for food supplies. Seventy-eight percent of Brazil's population survived on less than $100 U.S. per month per family.

Further, globalization causes economic problems in one region of the world to be felt throughout the world. In the late 1990s, there were signs of recession in Latin America, and East Asia suffered from a severe economic downturn. Economic woes in Latin America, Asia, and the economies of other emerging markets affect the economies of nations around the world. As a result, it is said that the pronouncements of the "Group of Seven" do provide a true representation of world economic interests. (The Group of Seven, or G-7, is an economic group that includes the United States, Japan, Germany, France, Great Britain, Canada, and Italy.) Some economists suggest that powers such as Brazil, China, and others deserve representation in world economic summitry.

LOOKING TO THE FUTURE

As we look to the future, we face various questions. Are there alternatives to globalization? Perhaps. Some commentators, for example, assert that regionalization can and should shift the balance of economic power away from the United States and toward lesser developed economies in Latin America and Asia. Others assert that globalization is an inevitable and irreversible process. If that is true, how can harm resulting from globalization be avoided or minimized? How can the globalization process be used to promote a more even distribution of wealth instead of widening the gap between the rich and the poor? These are challenges that world leaders face as we enter the 21st century. The answers will not be easy.