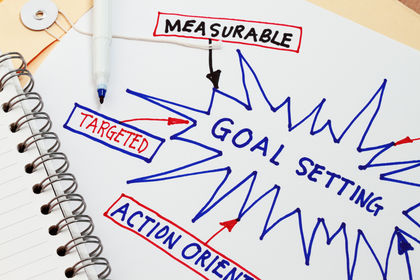 A goal is whatever an individual or a group is trying to accomplish. Consequently, goal setting is the process of setting targets for accomplishment. In the business world, goals commonly take the form of quotas, work norms, objectives, deadlines, and budgets. Both individuals and groups use goal setting to outline what, how, and when to complete tasks or to achieve objectives. Besides providing a target against which performance or results may be measured, goal setting serves as a tool to motivate workers; goal setting can be applied to nearly any task that can yield a verifiable or measurable result.

If implemented successfully, goal setting can yield four major benefits: increasing productivity, improving work quality, clarifying employer expectations, and relieving boredom, according to Edwin A. Locke. Because goal setting motivates employees to reach challenging but attainable production and quality goals, businesses can use goal setting as a method of increasing productivity and improving quality. Goal setting also clearly spells out what employers and managers expect of their employees. Finally, difficult but attainable goals can alleviate the boredom associated with repetitive jobs by imbuing them with challenge and meaning, according to Locke.

By the late 1990s, goal setting had trickled down to all levels of the workforce. More and more companies established quantifiable goals for their employees during this period, often by creating quotas or targets for their employees, such as production or sales quotas. Other ways of implementing goal-setting techniques included establishing deadlines for completing tasks and measuring the amount of time it takes to complete tasks. Critics of goal setting, however, contend that individual quotas and targets may interfere with teamwork, because workers will concentrate too much on reaching their individual goals. Nonetheless, proponents maintain companies can avoid this problem by establishing individual, departmental, and company goals for each worker.

THE ORIGINS OF GOAL SETTING

Goal setting is a process that has been used by individuals and groups to measure performance and get results for millennia. It was not until the early 20th century, however, that business researchers and theorists began positing formal theories, developing models to explain the role and value of goals, and establishing a framework for creating and using them in organizations. Frederick W. Taylor (1856-1915), considered the founder of scientific management, first incorporated goal setting into his task management around the turn of the century. Later, in the early 1940s, Abraham Maslow (1908-1970) developed his renowned theory: the hierarchy of needs, which helps to explain the importance of goals to humans. This theory identified five levels of human needs, the most important of which include those related to physical and social welfare, such as food, safety, and love.

Maslow argued that when these basic needs have been met, humans seek to meet other needs, including those related to self-esteem and self-actualization. According to the theory, human nature seeks to fulfill needs for recognition, a sense of accomplishment, and maximizing potential. Satisfaction of those needs, according to Maslow, leads to self-confidence, pride, and a sense of value and importance. Thus, Maslow's theory implies that humans are goal seekers by design—they have an innate need to set standards and objectives and then to meet those marks. Maslow's theory also has implications for group goal setting and attainment because it recognizes people's intrinsic need for acceptance and a sense of belonging.

David McClelland (1917-) punctuated Maslow's theories of motivation with his theory of need achievement, which gained acceptance during the 1960s and 1970s. This theory also helps show how and why people set goals. In essence, the need-achievement theory recognizes three basic human motivations: 1) achievement, or the desire to achieve in relation to a set of standards (i.e., goals); 2) power, or the need to influence others; and 3) the desire for cooperation and interpersonal relationships.

McClelland found that "high achievers," or workers with the greatest motivation, were those with a very high need to accomplish goals. His research also demonstrated that high achievers tend to set moderate goals that they know they can reach, as opposed to easier goals that provide no challenge. Likewise, goals that are too difficult to realize are counterproductive, because they reduce an individual's or a group's control of the situation since it remains highly uncertain whether the individual or group will be able to achieve the goal. In addition to needing reachable yet challenging goals, high achievers also need constant and concrete feedback on their performance so that they can adjust their behavior for success.

McClelland's individual need-achievement theory also had numerous implications for managers seeking to set and work toward goals in a group setting. In fact, his research simulated the findings of Locke during the late 1960s and 1970s about the use of goals in organizations. Locke's research demonstrated that goals are the greatest single motivator for workers excluding financial compensation. Locke found that workers have a need for clearly defined, moderate goals. In addition, the goals must be accepted and supported by all members of a group.

Acceptance of goals is contingent upon such factors as trust in management, perceived fairness, legitimacy, and the moral value of the objectives. The important requirement of acceptance, Locke's research suggested, can be met through participative goal-setting techniques in which employees help managers shape the objectives.

Locke also discovered that goals that are specific are more likely to be achieved. For example, instead of setting a goal of "making the best ball bearings we can make," a manager should set a goal of "making ball bearings with 99 percent inspection approval." In addition, Locke found that groups and individuals need constant feedback to determine whether or not they are moving toward their goals. Without that feedback they can become frustrated and lose their motivation. Furthermore, incentives can be used to increase the likelihood of goal achievement. Incentives provided for achievement of goals include monetary as well as nonfinancial rewards, such as recognition, approval, and greater responsibility.

Research concerning the importance and use of goals in organizations culminated in a heightened interest during the mid-to-late 1900s in using goals at the individual and group level to attain overall organizational objectives. Corporate goal-setting initiatives have most often take the form of management by objectives (MBO), a technique first publicized by management guru Peter F. Drucker (1909-). In essence, MBO is an approach to enhancing organizational effectiveness that is based on goals. Besides motivating workers, MBO creates an environment in which the performance of managers can be evaluated on the basis of results rather than on personality or perceived effectiveness.

MBO programs come in many forms. In general, though, they are designed to ensure that each worker has a set of goals that reflects the attributes described above. They typically encompass a four-step process used at both the individual and group levels: 1) determination of understandable goals; 2) formulation of realistic plans to meet the goals; 3) feedback, or constantly monitoring performance and relating results to workers and groups; and 4) behavior adjustment. Numerous other theories of and approaches to work motivation that rely on goal-setting techniques exist, including relations by objects (RBO), team building, and quality circles.

THE FUNCTION OF GOALS

Goal setting for individuals is the third of five stages in the motivation cycle: 1) the individual has an unsatisfied need, such as the need for food or recognition; 2) the person begins to want to fill that need; 3) the individual sets a goal that, if achieved, will likely fulfill the desire; 4) the person acts to meet the goal; and 5) the person analyzes feedback to determine whether or not the goal was achieved. For example, suppose a woman gets hungry. She wants food. She decides to eat a hamburger. She attempts to meet her goal by going to a restaurant and eating a hamburger. When she is finished eating, her stomach will tell her if she has fulfilled her original need for food. If she is still hungry she will have to change her behavior (or set a new goal). She may, for example, order another hamburger.

Goal setting for groups is part of the planning process in which strategies are developed to achieve specific organizational goals. Goal setting can occur at three basic management levels: top, middle, and line. Top managers are charged with setting long-term goals that define the overall objectives and missions of the organization. Middle managers carry out the goals of their superiors and, in doing so, set goals that direct the groups and individuals whom they lead—an example of a middle manager's goal might be to achieve a 14 percent increase in sales within 12 months. Finally, line managers strive to accomplish the goals of middle managers. To do so, they, in turn, create goals that address the day to-day needs of the operation—a line manager may set a goal of reorganizing a stock room.

An example of this process may be that top executives at a car factory set a goal of producing the highest quality, least expensive truck engine in the world. Middle managers in the production division decide that accomplishment of that goal requires that they set specific goals for their departments, such as increasing productivity by 20 percent within 12 months, or lowering the defect rate to one per 1,000. Finally, line managers would have to determine how to achieve those goals and who would do the actual work. They might decide to reduce salaries and increase bonuses as a reward to those workers who produced the highest-quality products.

As suggested above, goal setting at any level will generally involve basic attributes such as clarity and feedback. More specifically, organizational goals should be concrete and quantifiable, meaning that they can be measured against preset, preferably quantitative standards. They should also be time-oriented, in that they are devised with intermediate and final deadlines in mind. The goals should also be logistically attainable—insufficient resources or physically impossible goals can thwart motivation and result in underperformance. Finally, goals should be mutually supportive, meaning that plans made in one part of an organization should complement company-wide objectives.