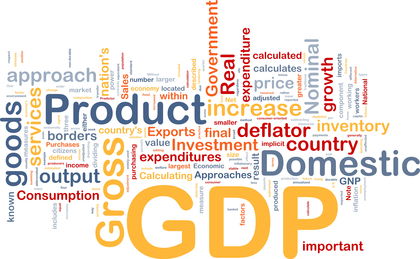 A country's gross national product (GNP) is a measure of the value of its production of goods and services for a specific period, usually one year. Comparisons of GNP from year to year or quarter to quarter, when measured in constant dollars, indicate changes in a country's overall production and the direction of its economy. In general, economic policy makers look to the size and growth of the GNP as an indication of the health of the country's economy. In a sense, it is the single most important measure of how an economy is functioning.

The term "gross national product" was probably first used in print by Clark Warburton (1896-1979) in his article entitled "Value of the Gross National Product and Its Components, 1919-1929," in the December 1934 issue of the Journal of the American Statistical Association.

GNP can be measured in at least two different ways, both of which yield the same result. One way of measuring the GNP is from the buyer's point of view, or in terms of aggregate demand. Also known as the expenditure approach to measuring GNP, this method calculates the value of the GNP as the sum of the four components of GNP expenditures: consumption, investment, government purchases, and net exports.

The expenditure method accounts for the source of the monetary demand for products and services. The largest component, consumption, includes the value of all the goods and services purchased by consumers during the year. (As a general rule, consumption expenditures account for approximately 65 percent of GNP in the United States.) The investment category includes the production of buildings and equipment as well as the net accumulation of inventories. Financial investments, which involve only transfer payments rather than the production of capital goods, are not counted. Government purchases include only expenditures for goods and services, not transfer payments such as Social Security. Net exports include the value of all goods produced in the United States but sold abroad, minus the value of goods produced abroad and imported into the United States.

Since every transaction involves a buyer and a seller, the GNP can also be calculated from the seller's point of view, which focuses on where money payments go. The method, also known as the income approach, measures GNP as the sum of all the incomes received by all owners of resources used in production. Such income payments are known as factor payments, because they are paid to various factors involved in the production of goods and services. These include employee compensation, rental income, proprietary income, corporate profits, interest income, depreciation, and indirect business taxes.

Employee compensation includes all payments relating to labor, including fringe benefits and taxes paid on labor. In the United States, employee compensation accounts for approximately 60 percent of GNP. Rental income is paid for the use of capital goods. Proprietary income represents payments to owners of business firms. Corporate profits are earned by the shareholders of a business. Interest income is received for lending financial resources. Depreciation is a charge against assets used in production. The indirect business tax refers to sales tax, which represents part of the payments for goods and services that are not paid to any of the income recipients.

The measurement of GNP is fairly complex and follows a set of rules that, while generally agreed upon, may nevertheless appear somewhat arbitrary. For example, housing is treated in a manner that protects GNP calculations from changes in the rate of home ownership. All occupant-owned housing, as opposed to rental housing, is treated in the GNP accounts as if rented. Thus, the rental value of occupant-owned housing is included as a service in the GNP along with the rental value of houses that are actually rented.

GNP measures the value of final products and services, so it is necessary to avoid double-counting the many intermediary products that are bought and sold in the economy. Products and services are counted as part of the GNP when they reach their final form.

Some important final products are actually excluded from the GNP. Many household activities are excluded, as are all illegal goods and services. In the case of housework, the services of a hired maid are considered part of the GNP, but not if the same services are performed by a member of the household. The exclusion of domestic chores has a greater effect on the calculation of the GNP of lesser-developed countries, where households may produce their own food and clothing to a greater extent than in the United States.

In the United States the GNP is reported at an annual rate every quarter by the U.S. Department of Commerce' s Bureau of Economic Analysis (BEA). That is, the quarterly figures represent what the GNP would have been for the year had the same rate of production continued for the entire year. In addition, the quarterly figures are subject to a series of revisions until a "final revision" is made by the BEA. Analysts look to the quarterly figures for information on the direction of the economy.

GNP is usually reported in current dollars. To obtain a comparison with past GNPs, the real GNP is calculated in constant dollars using what is known as the GNP deflator. The difference between reported GNP and real GNP is due to price increases rather than increases in the production of goods and services.

Carson, Carol. "The History of the United States National Income and Product Accounts: The Development of an Analytical Tool." Review of Income and Wealth, June 1975, 162.