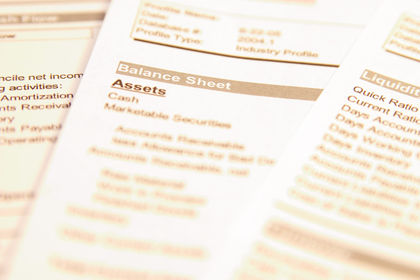 In accounting and law, intangible assets are nonphysical assets or things of value, such as trademarks, patent rights, copyrights (known collectively as intellectual property), franchise rights, leasehold interests, and noncompete agreements, as well as unquantifiable assets often referred to as goodwill or deferred costs, such as corporate culture and strategy, customer satisfaction, and employee loyalty. Although they lack physical substance, intangible assets—also called intangible property—may represent a substantial, or even a major, portion of a company's total assets.

Intangible assets are usually shown on a company's balance sheet under noncurrent assets, falling after fixed assets and before or among other assets. Generally they are recorded at their historical cost, and amortized—i.e., gradually written off as expenses over their useful lives. The period of amortization, however, cannot exceed 40 years under the current rules of the Financial Accounting Standards Board. The balance sheet lists such assets only if a company incurs a cost when acquiring them. Hence, non-physical assets acquired without a cost are not included in a company balance sheet. Moreover, not all assets lacking substance are classified as intangible assets. Money owed a company or an account receivable, for instance, is considered a current account, even though it has no substance.

Furthermore, in order for an expenditure to qualify as an intangible asset, a company must expect benefits in the following years and support that expectation with evidence. Expenditures such as those on advertising, for example, may promise future benefits, but the benefits are so uncertain and unpredictable that companies classify them as current expenses.

Patent rights entitle their owners to a 17-year monopoly to manufacture or use a certain product or process. The capitalized value of the intangible asset usually includes the legal costs involved with filing the patent application and perfecting and enforcing the patent rights. Research and development costs incurred in discovering the patent are typically excluded from the intangible asset, as accounting rules require such expenditures to be charged to expense in the year incurred. If part of the patent utility involves a cross-license arrangement with another company, any money paid to that other company would be included in the capitalized value of the intangible asset. Although patents have a technical length of 17 years, as a practical matter, inventions and innovations are often replaced by new technologies in much shorter periods. The amortization period should be the shorter of 17 years or until the patent no longer offers a competitive or marketable advantage.

Trademarks are the exclusive rights to proprietary symbols, names, and other unique properties of a product, such as packaging, style, and even color in some instances. The trademark is established by active use in the marketplace and registration with the U.S. Patent and Trademark Office. Capitalized costs will include the original design work plus the legal expense and filing fees to record the trademark. Any costs incurred to enforce the exclusive use of the mark are included as well. Trademarks have an indefinite life, provided the owner continues to actively use them, and, therefore, are not necessarily amortized.

As sanctioned by the Copyright Act of 1976, copyrights represent the legal right, for a period of 50 years after the author's death, to sell, copy, or perform a piece of literary, musical, or art work. Copyrights protect both published and unpublished works from reproduction or derivative use without the consent from the copyright owner (usually the author or publisher). This intangible asset will normally be recorded at its acquisition price, if the rights were bought, or simply the cost to file the copyright notice. This asset is amortized over its useful life, but not for more than 40 years.

Sometimes in connection with the purchase and sale of a business, the former proprietor(s) will agree not to engage in a similar business within a defined geographic area and for a defined period of time (generally two to five years). Such agreements are called noncompete agreements. The parties may also agree to allocate a portion of the purchase price to the noncompete provision. In these circumstances, the amount allocated becomes the intangible asset, which is amortized over the prescribed noncompete period.

Licenses are the contractual rights to use another's property, whether it be a patent, trademark copyright, real estate (usually called a lease), or exploration for natural resources. Often such licenses provide for ongoing payments assessed as a payment for the benefit gained by the licensee from the use of the property. These payments are known as royalties. In some cases, however, an up-front payment is extracted by the licensor, in which case that amount can be recorded as an intangible asset by the licensee. As with other intangible assets, its value should be amortized over the useful or contractual life, whichever is shorter.

Franchise rights constitute another kind of intangible asset. Franchises provide their holders with the right to practice a certain kind of business in a certain geographical location as sanctioned by the franchiser, usually a company or government agency. Fast-food restaurants, for example, often expand by selling franchise rights, which allow the franchisees to use a restaurant name and format in a specific locale. Since franchise costs vary dramatically, the period of amortization may be very short (one or two years) or very long (up to 40 years).

Goodwill refers to the price or value above the market value of the tangible assets of a company. When a company is bought, the price paid will often be above the market value of its facilities, equipment, inventory, etc. A company cultivates this intangible asset by establishing a strong business track record and by establishing many beneficial relationships, including those with customers, distributors, and suppliers. In addition, goodwill covers other valuable albeit intangible aspects of a company, such as its credit rating, location, reputation, and name. Goodwill also may manifest itself in the form of trademarks, manufacturing processes, and license rights.

In any event, goodwill reflects the buyer's perception that the company as a whole is worth more than the sum of the identifiable physical assets. On occasions, companies even sell their goodwill without the sale of other assets. For instance, a company planning to relocate may sell the right to use its name and facilities. Goodwill, as an intangible asset, is amortized for accounting purposes over no more than 40 years. Current tax provisions do not allow a deduction for the amortization of goodwill.