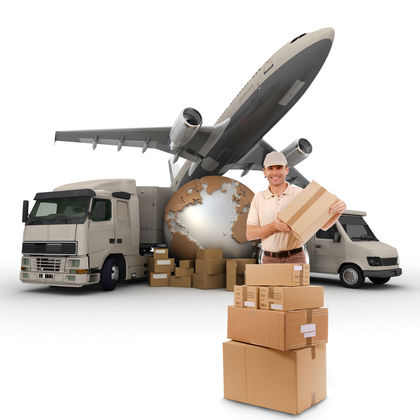 Part of logistics management, physical distribution is concerned with the transporting of merchandise, raw materials, or by-products, such as hazardous waste, from the source to the customer. A manager of physical distribution must also assess and control the cost of transporting these goods and materials, as well as to determine the most efficient way to store them, which usually involves some form of warehousing. Hence, physical distribution (PD) is concerned with inventory control, as well as with packaging and handling. Customer relations, order processing, and marketing are also related activities of PD.

In essence, physical distribution management (PDM) involves controlling the movement of materials and goods from their source to their destination. It is a highly complex process, and one of the most important aspects of any business. PDM is the "other" side of marketing. While marketing creates demand, PDM's goal is to satisfy demand as quickly, capably, and cheaply as possible.

One could maintain that PD is as old as civilization. Even merchants in ancient times had to move goods and raw materials to their destination, and to engage in storage and inventory control. Until the Industrial Revolution, however, these activities were carried out inefficiently: goods usually were replenished slowly, and there were far fewer goods than in the era of mass production. If marketing was conducted at all, it was usually done at the point of purchase.

The Industrial Revolution ushered in mass production and, by the late 19th century, the beginnings of mass marketing. Goods and raw materials also were conveyed over greater distances. Nonetheless, until World War II, PD was far less important than production and marketing. Physical distribution of goods and materials also remained basically unchanged, carried out as separate, unrelated activities—transportation and handling, storage, and inventory control.

The postwar years witnessed an unprecedented explosion of consumer goods and brands, thanks to modern mass marketing, the population explosion, and the increasing sophistication of the average consumer. The sheer volume and variety of goods enormously complicated their distribution and storage. A wholesaler of breakfast cereals, for instance, no longer handled a few cereal brands, but dozens of them, and with the proliferation of supermarkets, was confronted with the problem of greater demand and continuous product turnover. The cost of distribution escalated as well, further adding to the complexity of distribution. A seminal article on physical distribution ("New Strategies to Move Goods"), appearing in a September 1966 issue of Business Week, for the first time fostered an awareness of PD as a separate category of business. This eventually generated textbooks on physical distribution management, as well as courses in business schools. For the first time, PD, as well as cost control, became central concerns of upper management.

By this time, computers had slowly entered the realm of PD, at least in the United States. It was not until the 1970s, however, that computers were fully utilized. Their effect over time was to integrate the hitherto disparate categories of PD—transportation, storage, inventory, and distribution—into closely related activities.

Currently, computerization is performing the major functions of physical distribution management, from long-range strategic planning to day-to-day logistics, inventory, and market forecasting. The best of these systems are tightly integrated with inventory and other logistics systems, and may even be linked to customers' systems, as is the case with efficient consumer response (ECR) systems. ECR systems, which some have criticized as being to narrowly focused, attempt to maximize distribution efficiency by delivering inventory on a just-in-time basis. Advanced distribution systems may employ satellite tracking and routing of trucks, electronically tagged pallets or cargo containers, and elaborate data monitoring and storage capabilities. Data collected from these activities are used to identify weak spots in the chain and benchmark improvements.

Often upstart companies, and even some large ones as well, rely on third-party distributors for at least some of their physical distribution, and hence there is an entire industry of third-party logistics services. These and other outsourcing services received a great deal of attention during the 1990s, as manufacturing companies sought to eliminate peripheral activities when they could do so at cost savings. Smaller companies, on the other hand, frequently lack the expertise or resources to perform their own distribution. Nonetheless, some distribution analysts criticize the outsourcing movement because the net cost savings may be less than anticipated and the quality of the logistics service may be hard for the manufacturer to control.

Up to now, PDM has been concerned with the movement of physical objects. In the future, however, it will have to accommodate itself to the increasing shift of the economy away from manufacturing and toward service industries. In this new realm, environmental cleanup and the disposal of waste undoubtedly will be increasingly important to PDM. The expansion of global markets is also affecting PDM, requiring enormous technical and operational refinement.

Bachelor, Charles. "Buzzword or the Way of the Future?" Financial Times, 1 December 1998.