The cellulosic manmade fiber industry comprises establishments primarily engaged in manufacturing rayon and acetate fibers in the form of monofilament, yarn, staple, or tow. These fibers are suitable for further manufacturing in other industries on spindles, looms, knitting machines, or other textile processing equipment. Synthetic fibers, which represent more than 90 percent of all U.S. manmade fiber output, are classified in SIC 2824: Organic Fibers—Noncellulosic.

Cellulose fibers are made from modified wood pulp that has been dissolved in a liquid and treated with chemicals. The solution is forced through small holes called spinnerets; the extrusion dries into a hard filament. The shape and physical properties of the fiber can be modified during extrusion and processing to yield numerous fiber types and grades.

Cellulosic manmade fiber, of which rayon accounts for by far the largest portion, continued to lose ground in the late 1990s to synthetic fiber, falling to less than 10 percent of total U.S. and worldwide man-made fiber output. According to data from the Fiber Economics Bureau's World Surveys of Manufactured Fiber Production, cellulosics had fallen to about 7 percent of worldwide manmade fibers production by 1998; by 2002, this was down to 6 percent. Global production of all manmade fiber in 2002 was 36 million metric tons, up from 29.9 million metric tons in 1998 and more than double the 14.3 million metric tons produced 20 years earlier in 1978. However, while the output of synthetic fibers, such as polyester, has seen strong long-term growth, averaging 5 percent annually, the production of cellulosics, including rayon and acetate, declined an average of 2 percent per year between 1978 and 2002.

In the early 2002, more than 90 percent of industry output was rayon; this fiber is used to make apparel, home furnishings, nonwoven products, tires, and industrial goods. Less than 6 percent of production in the early 2000s was acetate, which is primarily used to create apparel, home furnishings, and cigarette filters. Total industry shipments declined from $1.72 billion in 1997 to $974.38 million in 2001.

The largest consumer of rayon and acetate in 2002 was the broadwoven fabric industry, which consumed more than 40 percent of total production. Apparel linings accounted for a large portion of the market, along with special occasion apparel and acetate/spandex blended fabrics. Knit fabric manufacturers accounted for 20 percent of the U.S. market.

The fibers, when made into fabrics, are identified by generic classifications that were established by the Textile Fiber Products Identification Act of 1960, and generic names were assigned by the Federal Trade Commission (FTC). The Identification Act also states that products must be labeled with the manufacturer's name and country and list the percentage of fiber content.

The first patent related to the manufacture of cellulose fibers was granted in 1855. In 1883 Sir Joseph Wilson Swan, a British scientist, created the first nonfla-mmable cellulose fiber. Commercially viable rayon fibers were invented during the 1890s. Acetate filaments were developed in the late 1800s as well, but did not receive commercial acceptance until the 1920s. During both world wars, particularly World War II, fiber development and production ballooned as warring nations sought inexhaustible supplies of apparel and textile fibers.

Rayon increased in popularity during the post-World War II U.S. economic expansion. In fact, by 1980 U.S. 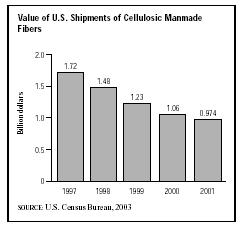 companies were generating more than 580 million pounds of fiber each year. Despite past growth, however, cellulose fibers were quickly losing favor to newer and better synthetic fibers, such as polyester and nylon. Between 1970 and 1990, the percentage of U.S. fibers (including organic filaments) made from cellulose declined from 28 percent to 6 percent. The industry was coping with environmental concerns and standards while trying to improve quality.

Revenues lagged behind inflation with an average growth rate of less than 1 percent per year, and industry employment fell from more than 14,000 people in the early 1980s to about 11,000 by 1992. The employment rate continued to fall, dropping from approximately 7,500 people in 1995, to 4,800 in 1997, to 2,100 in 2000. Further declines in the cellulosic fiber workforce were predicted into the new millennium. The number of establishments was also declining from 18 in the mid-1980s, to nine in 1995, and then only six in 1998. In the shrinking world of U.S. cellulosic fiber production, Buckeye Technologies Inc., formerly known as Buckeye Cellulose, is a major player. Headquartered in Memphis, Tennessee, Buckeye employed a workforce of 1,900 people and reported sales of $641 million for fiscal 2003 (the 12 months ending June 30, 2003.)

In the mid-1990s, the surviving U.S. cellulose fiber producers were hoping that lyocell, a new fiber, might spare the struggling industry. Two of the largest competitors, Courtaulds Textiles PLC and Lenzing Fibers Corp., were vying for domination of this new market segment. Lyocell offered superior performance compared to rayon and could be manufactured with fewer hazardous waste emissions. However, by and large, lyocell failed to live up to its early promise. Fiber makers were also hoping to benefit from massive capital investments made during the 1980s to improve productivity and develop better fibers.

Despite manufacturer's efforts, the long-term industry outlook remained bleak. Producers in emerging industrial nations, such as China and Malaysia, would likely devour greater global market share. More stringent environmental regulations would also take their toll on U.S. competitors (see SIC 2824: Man-Made Organic Fibers, Except Cellulosic ). Employment of cellulosic fiber production workers was forecast to continue falling by 15 to 25 percent between 1990 and 2005, according to the Bureau of Labor Statistics. Even high-paying research and engineering jobs were expected to increase only slightly during that period.