According to the U.S. Census Bureau, roughly 150 establishments operate in this category. Industry wide employment totaled 17,507 workers receiving a payroll of more than $556 million; 13,706 of these employees worked in production, putting in more than 28 million hours to earn wages of almost $364 million. Overall shipments for the industry were valued at more than two billion dollars in 2001. 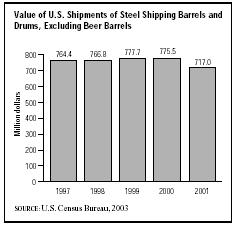 with $1.1 billion in 2002 sales. Greif Inc., formerly known as Greif Bros. Corp., of Delaware, Ohio, rounded out the top three industry leaders with sales of $1.9 billion for its fiscal year ended October 31, 2003. Other industry leaders included Longview Fibre Co. of Long-view, Washington, with 2003 sales of $773 million; Park-Ohio Holdings Corp. of Euclid, Ohio, with 2003 sales of $624 million; and privately owned Russell-Stanley Corp. of Bridgewater, New Jersey, which in late 1999 had introduced a new 55-gallon tight head steel drum with a "W" style hoop enclosure for maximum freight usability and vacuum seal.

Five states held well over one-half of the industry's establishments and accounted for roughly 60 percent of U.S. sales. Illinois proved to be the leader in terms of number of establishments and in value of shipments of metal barrels, drums, kegs, and pails. Ohio held the second place spot, followed by Texas, California, and Pennsylvania. Illinois' workers averaged the highest wages, while hourly workers in Texas were paid the lowest wages.

Modifications in the design of steel drums and higher quality steel have improved drum and pail performance considerably. The U.S. Department of Transportation has also helped in improving the quality of the industry when their Performance-Oriented Packaging Standards went into effect in October of 1996. The new standards called for better formed individual drum parts, improved gasket and closing rings, and more secure joining of individual parts.

Both the improvement of technology and superior steel products have made incredible improvements to the drum and barrel industry. Computer controlled operations within the steel processing industry have improved thickness tolerances, resulting in stronger, yet thinner steel, and also eliminated pinholes. This meant that steel container manufacturers in the late 1990s and early 2000s had far better raw materials than they had just a few years before.