The companies classified in this category are a small but growing part of the overall coal industry. According to the most recent data from the Bureau of Labor Statistics, the industry employed 4,790 workers in 2001, down slightly from the figure for 1997. Construction and extraction workers accounted for more than half of these employees, who earned an annual salary of $34,000 on average. Although coal mining services as an industry has grown in absolute terms (relative to total coal production), its share of total coal production, which reached 1.09 million short tons in 2002, was less than 2 percent. The total number of coal mines in operation in 2002 totaled 1,426, compared to 2,746 a decade prior.

The increase of mining services as an industry in its own right largely reflected cost-cutting measures on the part of the coal mining industry. They often cut costs by increasing use of nonunion workers to perform many of the tasks previously performed by union workers. Contract mining services also grew due to the fact that many larger coal interests simply diversified their operations or got out of certain aspects of coal mining.

With specific services contracted out, firms can avoid a large commitment of capital investment and small entrepreneurs have seen a profitable opening. Thus, faced with erratic demand conditions, the industry has seen an increase in flexible conditions of production, including just-in-time methods, which create smooth production, reduce turnover times, and thereby reduce down-time. Flexible work rules involving eradication of union work rules—or at the very least, union cooperation—have contributed to mine efficiency. In any case, with various degrees of contract services, the number of large independent operators continues to decline according to some industry observers, with efficiency forcing the competition process.

Approximately 300 establishments provide services to the coal industry on a contract basis. These companies provide services ranging from removal of overburden, stripping the mine face, auguring or culm bank mining, drilling services, mine tunneling, and shaft sinking. Most of these establishments and multi-establishment firms are small; only 50 have more than 19 employees and, of these, only 14 have 100 or more.

The most significant revenue source in the coal mining services industry is strip mining, followed by stripping overburden, sinking mine shafts, driving mine tunnels and drilling and blasting. In terms of major area of geographic concentration, the larger companies engaged in coal mining services (with 20 or more employees) are concentrated in West Virginia, Kentucky, Pennsylvania, and Ohio. These firms accounted for approximately three-fourths of the workforce and more than half of the value of shipments and receipts.

Coal mining services are defined more according to company organization rather than by type of activity. In other words, for a given technique of extracting coal, a number of activities are undertaken including sinking shafts, stripping, tunneling, drilling, coal recovery, transportation, and others. For any particular mine, these activities may take place under the auspices of one establishment, or some of the services may be outsourced to a contracting company for a fee. In the case where one particular establishment has complete responsibility for the operation of the mine, the activities are classified according to the product mined, whereas specific activities performed by contracting companies on a fee basis are counted as part of the coal mining services industry.

Historical Precedents. With its small but integral connection to the coal industry in general, the coal services industry rises and falls with coal mining. Mining services have been an integral part of the rise of coal in the United States, whether they were part of the mining companies operations or provided through companies that contracted with the mine owners and operators. In general, the evolution of mining services connected with coal mining and the rise of separate companies providing these services relates to the changes in production techniques in the extraction of coals and the efficiency of production methods. Thus, the separation of the industry called mining services is somewhat artificial, or at the very least, a changing one.

In fact, the early techniques of coal mining were exceedingly simple—simply carrying coal from the exposed vein. Of course, these primitive methods were rapidly replaced by a more refined division of labor, and eventually, by machinery, which rationalized the production processes and reduced the total labor time required per unit of coal mined.

In the early years of coal mining, primitive production methods meant individual workers owned and operated their own tools and were paid piece-wages, according to the amount of coal mined. This involved the simple act of shoveling coal into a pile, then throwing it into an empty mine car—human muscle. According to Keith Dix, as late as 1948, one-third of the nation's under-ground coal was still loaded by hand. The early miners used their own tools, paid the company blacksmith to keep them sharp, and worked the mines and railroad track owned by the company. The miner also bought his own blasting powder, lamp oil, and other supplies, and even purchased his means of subsistence from the company stores. Thus, the early miner was an independent craftsperson combining a high level of knowledge and skill.

While increases in productivity came fast and furious in coal mining, the labor process in mining coal, during any period, involved essentially five tasks: sinking a shaft for an underground mine, penetrating a slope, or uncovering a surface vein; undercutting the coal vein face; drilling the face; blasting the coal; and shoveling the broken coal into cars.

Mechanization to reduce costs, and to overcome the resistance of an increasingly militant mine workers union, proceeded quickly. First, undercutting machines developed, and eventually, the mechanization of hauling, drilling, and cleaning followed. The result was higher capital equipment requirement per worker, vast improvements in labor productivity, and a decline in labor requirements. Impediments in transportation to markets were overcome by agreements with the developing railroad industry near the turn of the century.

The Ups and Downs of the Coal Industry. While precise records of coal mining services as an industry were not kept by the government until the late 1960s, coal mining services has undoubtedly been a part of coal mining from the time of its inception. The railroads provided the impetus for the coal boom during the first two decades of this century, but when the railroads switched to the oil burning diesel engine, coal lost a major customer. This, accompanied by the switch of home heating to oil and gas, deflated the coal industry in the post-World War II period. Following the protracted boom immediately following World War II, by 1961 coal output declined to 1939 levels.

In the early 1960s, mechanization (which reduced unit costs), the decline in general transportation costs, and the surge in demand for electricity brought the industry to life. The rise in electricity demand between 1962 and 1966 produced a boom in the coal industry of over 26 percent. Smaller, more efficient, continuous mining companies also increased the intensity of labor, further reducing costs. The surge in demand from electrical utilities, which comprised over 50 percent of coal industry sales, led to two of the most dynamic decades in U.S. coal history in the 1960s and 1970s. This dynamic led to concentration and consolidation of industry capital and to the rise of small contracting companies.

The number of mining service establishments more than doubled from 191 in 1972 to 422 in 1982. The massive rise in productivity allowed for relatively high wages in the industry and exports boomed, with foreign customers seeking low-cost, high-quality U.S. coal. The markets for steel (coal's second largest customer) also came to life in the postwar boom. Nuclear power was a small, but growing, government-subsidized industry at this time.

Though the 1970s witnessed a slowdown in coal productivity, this trend reversed in the 1980s. After an austerity campaign, the introduction of continuous mining techniques, and further advances in mechanization 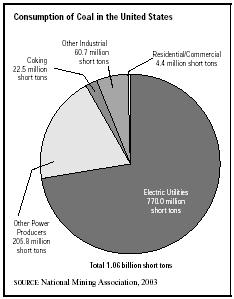 in cutting, drilling, and loading, the 1980s witnessed a resurgence in productivity growth and a reduction in necessary workers. This shakeout in the industry also led to a decline in the proportion of union mines. In the non-union shop, mine operators implemented work rule changes—allowing flexible work teams, cross-training, and fewer and longer shifts. In addition to the relative hardship of laborers, industry leaders faced a highly uncertain and sluggish demand in an industry where many firms struggled to finance the large scale capital investment that was required to compete.

The U.S. coal industry was still strong in the early 2000s, second only to China in terms of coal production, but growth was sluggish and prices continued to fall. Between 1994 and 2002, U.S. coal production hovered between 1.0 and 1.1 billion short tons. Electric utilities remained by far the largest consumers of coal, and demand from this sector was expected to remain steady well into the future. More than half the electricity used in the United States is generated by coal.

The industry was marked by consolidation as smaller, less efficient mines closed and some large nonmining corporations who had acquired coal mines during the seventies sold withdrew. Large mining companies expanded by acquiring these existing operations more often than by opening new mines. Between 1998 and 2002 the number of U.S. mines in operation declined from 1,828 to 1,426. Production shifted west where economies of scale could be brought to bear on operating costs, and where large deposits of the low-sulfur coals desired by the utilities were located. Surface mines, most of which were located in western states, accounted for 66 percent of U.S. production in the early 2000s. Wyoming, the leading state in terms of coal production, mined 373 million short tons of coal in the United States, accounting for 34 percent of coal production in 2002.

Given these conditions, in which narrow profit margins forced coal operators to seek every possible means of lowering operating costs, expanding opportunities existed for mining service companies, which were able to accomplish some aspects of the mining process at a lower cost. Companies in this industry segment provided much needed flexibility to mine operators.

Although there were a fairly large number of firms classified in this industry in the early 2000s, the consolidation and influx of foreign companies that marked the coal industry at large were evident in coal mining services also. The largest companies in the field in the late 2000s were subsidiaries of major corporations, such as Texas Utilities Mining Co., a subsidiary of TXU Corp., which reported 2003 sales of $11 billion. The North American Coal Corporation operates as a subsidiary of NACCO, a diversified conglomerate that reported 2002 revenues of $2.5 billion. Other large operators included several subsidiaries of Tenneco Inc., First Mississippi Corporation, and Flour Corporation.