U.S. manufacturers generated approximately $2.18 billion in broom and brush shipments in 2001, down 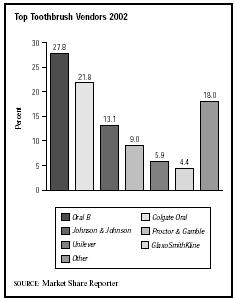 Manufacturers range from small, family-owned businesses to large corporations for whom broom or brush manufacture is one of many interests. The 1980s and early 1990s were characterized by a series of acquisitions of smaller firms by larger corporations. Empire Brush Company of Greenville, North Carolina, acquired six companies in that period and reported a 100 percent increase in sales. Two of the largest makers of "stick goods," O-Cedar and Vining Industries, merged in 1993. This proved to be a profitable merger as the Ohio-based company boosted its home state as the leading brush and broom producer in the United States by 1997.

The vast majority of companies are privately owned. The industry is most heavily concentrated in the Midwest, with Ohio, Illinois, and Wisconsin responsible for more than 30 percent of shipments.

Until the mid-twentieth century, brushes were made of natural materials such as hog bristles, horsehairs, and Tampico fibers. Brooms were made of birch and willow twigs until replaced in the early 1800s by broomcorn straw (actually a type of sorghum). In 1906, the entire brush industry generated $19 million in sales. The innovative sales techniques of the Fuller Brush Company helped revitalize the industry, so when founder Alfred Fuller turned operations over to his son Howard in 1946, Fuller Brush alone earned $41 million. Fuller Brush, a division of the Sara Lee Corporation, saw its importance as an industry leader diminish from 1968 through 1989.

The replacement of original materials with longerlasting synthetic fibers and metal alloys caused a major change in the industry. This, combined with advances in mass production techniques following World War II, decreased production costs and allowed for greater profit margins. Broom making also was affected by mass production. Plastic brooms became more common, although more than 50 percent of all brooms are still made of broomcorn.

Industry growth in the 1980s continued slightly but steadily. Profit margins in the early 1990s were above average compared to other manufacturing industries, largely due to increased sales caused by new designs. In the 2000s, the American Brush Manufacturers Association (ABMA) was involved in creating labeling standards so consumers could better compare product quality.

Broom manufacturers in particular became concerned with the potential threat caused by the North American Free Trade Agreement (NAFTA). Before NAFTA, the American industry was protected by a 32 percent tariff on imports, due to phase out over an 11-year period. Mexico, already the largest supplier of brooms, was expected to benefit from the elimination of tariffs. The fears were unrealized, however, as the U.S. brush and broom industry saw a 65 percent increase in sales between 1995 and 1997. As of the following year, sales declined annually into the 2000s.

In 2001, the overall industry leaders were E-Z Paintr Corp. of St. Francis, Wisconsin; Helmac Products Corp. of Alpharetta, Georgia; and Emsco of Girard, Pennsylvania. In the toothbrush segment, Oral B had 27.8 percent of the market in 2002, followed by Colgate Oral with 21.8 percent, Johnson & Johnson with 13.1 percent, and Proctor & Gamble with 9 percent. Gillette had 26.5 percent of the electric toothbrush market in 2002, followed by Proctor & Gamble with 18.3 percent and Philips with 15.6 percent.

Leading industry publications include Brushware , published by 12/Twelve Media and Broom, Brush and Mop , published by Rankin Publishing. The ABMA, based out of Philadelphia, Pennsylvania, is a membership trade organization representing broom, brush, and mop manufacturers. According to ABMA, most industry statistics, including the data collected by the association, are closely guarded.

ABMA has been headquartered in Aurora, Ill. for a few years.