This industry contains establishments primarily engaged in manufacturing carbon paper, spirit or gelatin process and other stencil paper, and inked or carbon ribbons for business machines. 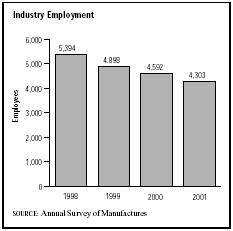 The value of industry shipments of carbon paper and inked ribbons was $624 million in 2001; this was a decrease from 2000's total of $695 million. There were approximately 84 firms in the industry in 2001; 24 of these establishments had fewer than 5 employees and 7 had more than 500 employees.

According to the Annual Survey of Manufactures , the carbon paper and inked ribbons industry employed a total of 4,303 employees in 2001, including 2,761 production workers. The total payroll was more than $140 million.

The capital requirements for the industry were relatively low: the average investment per establishment was only 59 percent of that for the manufacturing sector as a whole.

The states with the highest number of establishments in the industry in the late-1990s were California with 14; New York with 10; New Jersey, Pennsylvania, and Ohio with 10; Texas with 7; and Georgia with 6. Together these seven states accounted for more than 47 percent of total employment in the industry.