This industry includes companies that make notions, such as slide and snap fasteners and zippers, machine and hand needles, pins, hooks and eyes, buckles, buttons, button parts, and button blanks. Companies that make these items from precious metals or from precious or semiprecious stones are classified in SIC 3911: Jewelry, Precious Metals.

Needles, pins, and fasteners—made from metals and both natural and manmade fibers—comprise the largest share of this industry's output. Zippers, slide fasteners, buttons, and button parts—made from both plastics and metals—were less dominant but notable types of industry products. Nearly 90 percent of industry output re-entered as components for other manufacturing industries. Of these, apparel, shoes, knitting mills, and household furniture makers were most prominent. Items sold directly to consumers made up the remainder.

In 2001, the total value of goods shipped was $704.3 million. During the 1990s, manufacturers of fasteners, buttons, needles, and pins were primarily located in the eastern United States. New York and Connecticut led the nation in the number of establishments per state, with 82 and 25 establishments, respectively. 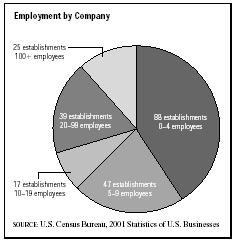 Prym Dritz Corp., with $50 million in revenue and 100 employees.