In the 2000s, linoleum had the lion's share of the market, with about 85 percent. Linoleum, a traditionally popular industry offering, is made in sheets by pressing a mixture of heated linseed oil, rosin, powdered cork, and pigments onto a textile backing, such as burlap or canvas. Synthetic coverings similar to linoleum are created with mixtures of resins, elastomers, and plasticizers. Typically, these newer types of flooring are more moisture resistant, durable, and workable than linoleum. In 2003, 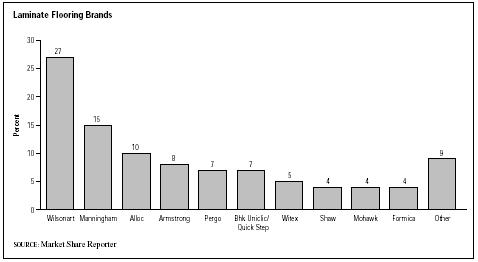 Englishman Frederick Walton invented the linoleum production process in 1860. The use of linoleum and similar floor coverings expanded greatly during the 1920s. Asphalt tiles were developed in 1930, and vinyl floor was invented in 1945. But it was not until the 1960s, when flat concrete subsurfaces became standard in U.S. homes, that hard surface coverings exploded in popularity. A profusion of synthetic flooring products during the 1960s and 1970s sharply increased industry sales. By the early 1980s, manufacturers were shipping about $600 million worth of flooring each year and employing about 3,000 workers.

Steady market growth and the development of new and better floor coverings more than doubled industry revenues during the 1980s. Advanced polymer technology and new plasticizers allowed the introduction of less expensive materials with higher performance. By 1989, industry participants were enjoying sales of $1.4 billion. The industry exhibited a mixed performance in the 1990s. Showing only modest gains in the early 1990s, industry sales hit $1.73 billion in 1994 but then drew back to $1.67 billion in 1995, when manufacturers reported sluggish retail sales. By 1997, sales were back up to $1.8 billion. Continued strength in new housing starts in 1999, as well as general U.S. economic strength, was expected to contribute to growth in hard surface flooring.

The year 2000 was an unusual one for the industry, with many companies consolidating, filing for bankruptcy, and preparing for lawsuits related to new standards on asbestos. The future was uncertain, but companies were optimistic that a focus on product quality, as well as customer service, would keep them viable for the long haul.

The hard surface flooring industry is extremely consolidated—only about 34 companies made up the industry in 2001, according to the U.S. Census Bureau. The largest producer was Mannington Mills, of Salem, New Jersey, which had company-wide sales of approximately $180 million and employed 900 workers. In 2002, those numbers had jumped to $220 million in sales and 2,200 employees.

The largest floor covering companies industry wide in terms of sales were Mohawk Industries Inc., Armstrong Holdings Inc., and Interface Inc. According to Market Share Reporter , Wilsonart was the top selling brand of laminate flooring, with 27 percent of the market in 2002. Second was Manningham with 15 percent, followed by Alloc (10 percent) and Armstrong (8 percent). Forbo commanded the lion's share of linoleum sales, with 90 percent of that market.

Increased manufacturing efficiency, achieved through automation and restructuring, will inhibit employment growth in this industry in the long term. Increased demand for new synthetic coverings, however, will create opportunities for some occupations. The number of sales positions, for example, was expected to rise 30 percent for the miscellaneous manufacturing sector between 1990 and 2005, according to the Bureau of Labor Statistics. A total of about 5,060 workers made up the industry in 2001.