This classification covers establishments primarily engaged in the retail sale of new and used motorboats and other watercraft, marine supplies, and outboard motors.

In 2001, the U.S. Census Bureau reported 5,301 establishments primarily engaged in the retail sale of new and used motorboats and other watercraft, marine supplies, and outboard motors. The industry employed approximately 39,405 people. The National Marine Manufacturers Association (NMMA), which tracks the industry, reported the downturn in the boating industry as the nation focused on the threat of terrorists attacks and the war with Iraq. However, the market ended 2003 on a positive note. There were an estimated 17.49 million registered, and non—registered boats in the United States as of 2003. Powerboat sales had increased equally in units and sales. The unit sales were up one percent, while the total sales were up 9.3 percent. Sales were up for new boats, as well as engines, and accessories reached $16 billion for 2003. The trend continued in January of 2004, with all boats up 15.6 percent. NMMA predicted positive results for February, as well. There were a total of 17.49 million registered and non—registered boats in the United States as of 2003. Equally important, there were an estimated 72 million people "participating in recreational boating."

After a period of deep industry recession, in which boat and marine accessory sales dropped from $18.0 billion in 1988 to $10.3 billion in 1992, the boating industry at both the manufacturing and retail levels rebounded strongly during the mid-1990s. Buoyed by the strong economy, continued low interest rates, and the repeal of a 10 percent federal luxury tax on new boats priced at $100,000 and above in 1993, the industry saw retail expenditures on boating rise to $19.3 billion in 1997, although they did drop a bit to $19.2 billion in 1998.

NMMA reported that overall sales of new boats (measured in units) fell by six percent to 571,100 and total retail sales dropped by one percent to 19.2 billion in 1998. Sales of the recent market-leading product, personal watercraft or PWCs, often called "jet skis," a Kawasaki Motors Corp. brand name, had almost doubled in only two years with peak sales in the mid-1990s topping at 200,000 units sold in 1995. The price of these PWCs were key to their popularity. NMMA statistics show that in 1998 the average PWC sold for $6,681, compared to $254,365 for large cabin cruisers and $23,167 for the average stern-drive power boats. However, this PWC market segment has seen a steady decline in sales into the late 1990s. The number of units sold dropped 26 percent from 176,000 in 1997 to 130,000 in 1998. The NMMA reported that the "bread and butter" of the retail market, outboard motor boats, held even in terms of units sold but dropped in sales figures by four percent; this was attributed to a retail unit price drop of roughly $300 per unit.

On the up side of boat sales, the industry saw an increase of nearly one third for center console and "walkaround" fishing boats. Sales of all-purpose deckboats rose by 20 percent. In addition, interest in kneeboarding has helped to spur sales of water ski boats. The NMMA forecast that the industry should do well into the next century.

Boat dealers in the United States are, for the most part, independent retailers. Although a retailer may choose to feature a particular manufacturer's boat, dealerships are not controlled or owned by that manufacturer. Boat & Motor Dealer, the leading periodical of the industry with a circulation of nearly 30,000, named as 1999's top dealerships: Lodder's Marine of Fairfield, Ohio; Baert Marine Inc. of Danvers, Massachusetts; Mariner's Choice Marine of York, Pennsylvania; and Fay's Marina, Inc. of LaPorte, Indiana. 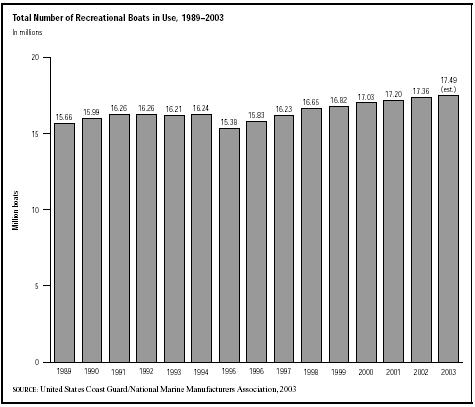 According to U.S. Bureau of the Census figures, the number of people employed in the boat retail industry averaged 31,000 throughout the 1990s. Also, there were an average of 4,700 boat dealer establishments in the United States during the 1990s.