This industry classification includes establishments primarily engaged in the retail sale of a general line of apparel, dry goods, hardware, housewares or home furnishings, groceries, and other lines of limited amounts. Stores selling commodities covered in the definition for department stores, but normally having less than 50 employees, and stores usually known as country general stores are also included in this industry. Establishments primarily engaged in retail sale of merchandise by television, catalog, and mail-order are classified in SIC 5961: Catalog and Mail-Order Houses.

452990 (All Other General Merchandise Stores)

Sales in the larger retail industry topped $3.0 trillion dollars in 2000 and continued to climb, reaching nearly $3.4 trillion in 2003. Of this total, combined sales of miscellaneous general merchandise stores and warehouse club stores accounted for approximately $256.9 billion. 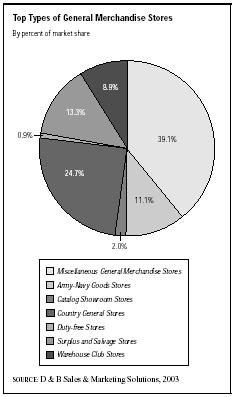 In the United States there were 30,795 stores that comprised the general merchandise segment of the retail sector in the early 2000s. They employed approximately 798,641 employees with an annual payroll of $13.6 billion. While warehouse clubs and superstores made up about 1.4 percent of this category, they were responsible for nearly 85 percent of the sales. Costco and Sam's Club are the leaders within the warehouse clubs and superstores segment. They give consumers an opportunity to purchase items at a discount and in bulk. They are typically housed in warehouses and are about 60,000 square feet larger than a regular department store or discounter.

A handful of major players dominate this retail industry segment in the United States. Arkansas-based retail giant Wal-Mart Stores Inc. topped the list in fiscal year 2004, with sales of $256.3 billion and 1.4 million employees. Wal-Mart operates some 1,500 discount stores in the United States. However, the company also has 1,470 Wal-Mart Supercenters that span anywhere from 90,000 to 261,000 square feet, along with Neighborhood Market stores in select states, and more than 500 Sam's Club warehouse stores in 48 states.

Minneapolis-based Target Corp. followed Wal-Mart, with fiscal year 2004 sales of $48.2 billion and 192,000 employees. Although it operated the well-known department store chains Marshall Field's and Mervyn's, the company claimed a large share of the general merchandise market with its 1,147 Target Stores. Located in 47 states, these included regular Target stores spanning about 126,000 square feet, as well as 145,000-square-foot Target Greatland stores and 175,000-square-foot SuperTarget stores.

Headquartered in Issaquah, Washington, Costco Wholesale Corp. was another leading industry player, with 2003 sales of $42.5 billion. The company enjoyed status as the nation's leading operator of warehouse clubs during the early 2000s. At this time, about 41 million club members frequented Costco's 430 stores in 36 states and several foreign countries, choosing from an array of roughly 4,500 different products.

Based in Grand Rapids, Michigan, the family owned general merchandise and grocery chain Meijer Inc. reported sales of $11.1 billion in fiscal year 2004. The company operated approximately 160 stores in a handful of Midwestern states, including Michigan, Ohio, Illinois, Kentucky, and Indiana. Meijer employed about 75,000 people in the early 2000s. Its stores, which were open 24 hours a day, 364 days a year, spanned anywhere from 200,000 to 250,000 square feet in size, and offered patrons a selection of some 120,000 items.

Heading into the mid-2000s, the retail industry in general was doing relatively well. Following an economic downturn during the early 2000s, retail chains were witnessing an increase in consumer spending. Due to the continued market dominance of discount retailers, superstores, and warehouse clubs, the future growth of catalog showrooms, which also are a part of this retail segment, appears to be flat. Customers are frequenting superstores on a fairly regular basis and those stores that want to stay competitive need to explore ways to improve customer service and use technology effectively in their store's operation.

——. Number of Firms, Number of Establishments, Employment, and Annual Payroll By Employment Size of the Enterprise for the United States, All Industries 2001. Available from http://www.census.gov/csd/susb/usalli01.xls .