This industry consists of establishments primarily engaged in the retail sale of new and used mobile homes and their parts and equipment. This classification excludes companies selling travel trailers or campers; these companies are discussed in SIC 5561: Recreational Vehicle Dealers.

Since the 1950s, the demand for mobile homes had increased approximately 2,700 percent, and by 2000, the U.S. Census Bureau reported 8.8 million mobile homes. 2003 found approximately 8,785 establishments primarily engaged in the retail sale of new and used mobile homes and their parts and equipment. Mobile home dealers represented the largest sector with 8,260 establishments, or 94 percent of the overall market. Their combined annual sales were about $11.1 billion. Together, they employed some 45,534 people. Mobile offices and commercial units number 22 businesses, and generate $10.9 million.

The mobile home retail industry originated in the United States following World War II. The growth of suburbs coupled with increased demand for low-cost housing enabled mobile home dealerships to establish a foothold in the housing market. Sometimes referred to as "trailer homes," mobile homes became immediately popular because they allowed families to own homes at a relatively inexpensive price. Moving was also made easier by these "houses on wheels." As mobile home sales rose, mobile home parks, which leased plots of land to mobile home owners, began to offer more conveniences to their renters, including swimming pools. Mobile home owners also enjoyed the ordinary amenities offered by rental parks, like yards to mow and flowerbeds to plant.

The industry experienced steady growth until the late 1970s, when mobile home sales sagged with the rest of the economy. Even after the recession lifted and the economy improved in the 1980s, the mobile home industry lost some of its market share to traditional homes that became more affordable to consumers due to lower interest rates. Some large mobile home dealers filed for bankruptcy during this depressed market.

Mobile home retail sales began to pick up again in the late 1980s with the introduction of "manufactured homes," which are steel-framed homes built in factories and driven to lots. These homes usually include at least two bedrooms and two bathrooms and cost roughly onequarter of the price of regular houses. The mobile home industry further solidified its position during the 1990s: in 1991 total sales for mobile home dealers totaled $5.57 billion, and by 1999 sales topped $14 billion. Unit sales increased from around 150,000 in the 1980s to more than 350,000 in 1999.

In the late 1990s, about 20 million Americans, or 7 percent of the population, lived full-time in more than 8.5 million mobile homes. Approximately 3.3 million mobile homes were located in the southeastern United States, 1.9 million in the Southwest, 1.7 million in the Midwest, 864,000 in the Northwest, and 855,000 in the Northeast. Florida was the top ranked state with 900,000 mobile homes, followed by Texas with 722,000, North Carolina with 633,000, and California with 596,187. Most states have passed laws regulating the construction and safety of mobile homes to allay consumer concerns about their durability during storms.

At an average cost of $43,000 per unit, manufactured housing was the fastest growing sector of the housing industry. It accounted for more than 25 percent of all new single-family homes built in the United States. Mobile homes were alternatively marketed as cost-effective retirement 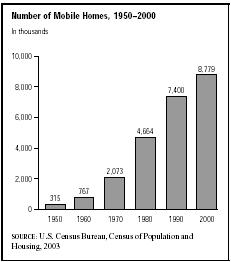 According to industry leader, Clayton Homes, Inc., "the mobile home sector is suffering one of its periodic busts." In fact, since 1999 some 4,000 "retail outlets have shut their doors," according to James Lee Clayton, which included some top competitors. Clayton Homes has enjoyed a total of 28 years with continued growth and expansion.

The industry leader in mobile home retail sales in the late 1990s was Oakwood Homes Corp., a Greensboro, North Carolina, manufacturer with $1.14 billion in annual sales from 359 retail locations. Clayton Homes Inc., a manufacturer based in Maryville, Tennessee, ranked second with $535 million in sales from 273 retail locations. Fleetwood Enterprises Inc., a manufacturer based in Riverside, California, ranked fourth with approximately $250 million in annual sales from 182 retail locations. In 1999 Champion Enterprises, an Auburn, Michigan, mobile home manufacturer, acquired Care Free Homes Inc., a manufactured home retailer headquartered in Salt Lake City, Utah. The acquisition left Champion with 281 retail locations in 28 states, and sales were expected to top $1 billion in the year 2000. Former industry leader Oakwood Homes Corp., was acquired by Clayton Homes Inc. in 2004. Oakwood Homes closed 2003 with $398.2 million in sales. Upon the acquisition the company was renamed Reorganized Sale OKWD, Inc. Clayton Homes generated $1.1 billion annual sales for 2003, followed by Fleetwood Enterprises Inc. with $2.3 billion. Fleetwood is the leader of RVs, and places second next to Clayton in manufactured homes. Champion ranks third with sales of $1.1 billion for 2003.