This category covers establishments primarily engaged in the retail sale of used cars only, with no sales of new automobiles. These establishments also frequently sell used pickups and vans at retail. Establishments who sell both new and used cars are classified in SIC 5511: Motor Vehicle Dealers (New and Used).

The National Independent Automobile Dealers Association (NIADA) reported that 43 million used cars valued at $370 billion total were sold in 2002, also noting that the average age of vehicles on the road was about 8.5 years. NIADA concluded that the used car sales would remain at about 40 million in the coming years. In 2003, used vehicles accounted for 28.3 percent of the overall market. According to the National Automobile Dealers Association (NADA), new car dealers purchased some 19.4 million used cars in 2003. NIADA also reported that there were more than 16,000 independent dealers in the United States in 2003. Many independent used-car dealers belong to NIADA, which reported that its members sold between one and two million vehicles annually and that the average used-car dealer has been in business for more than 22 years.

The majority of the independent dealers were concentrated in Texas with 7,465 dealerships. California had 5,217, Florida had 3,920, and Pennsylvania had 3,069. The largest segment was used automobiles only, a segment that commanded more than 77 percent of the market. Used car dealers had 20 percent of the market. There were 507 dealers of used trucks, tractors, and trailers, and 118 dealers of used pickups and vans.

The used-car industry grew out of the automobile manufacturing industry. When manufacturers began encouraging their customers to trade in old cars and purchase new models, used cars became increasingly available. By the mid-1920s, used-car lots were a part of the American landscape.

The abundant availability of cheap used cars made car ownership within reach of almost everyone. In 1927, the average four-year-old "basic transportation" car sold for approximately $100, and although low income families were unable to buy new cars, even on installment, approximately 64 percent of American families did own an automobile of some kind.

During the Depression years, sales of new cars plunged, but car usage declined only slightly. In 1929, 26,704,825 vehicles were registered. The number fell to a low of 24,159,203 in 1933. People kept their cars longer and looked to the used-car market when replacement was necessary. Used cars and trucks also served to carry thousands of displaced farmers from the Dust Bowl region into California.

As the nation emerged from the Depression, car sales increased. Vehicle registrations in 1937 topped the 30 million mark. Strengthening new car sales served to fuel the used-car market. In 1938, the nation's first automobile auction was held in South Carolina; the first car auctioned was a 1932 Ford Model A.

Used cars also played an important role during World War II. During the war, production of civilian automobiles halted, and once again people held onto their cars as long as possible. Sales of parts soared, and as cars wore out, people turned to used-car dealers for replacements. Used-car prices were controlled by the Office of Price Administration, but according to automotive historian, Stephen W. Sears, "under-the-table dealing frequently raised the price of old clunkers to more than they had cost new."

Following the war, auto manufacturers were slow to return to full production and demand for cars was high. The shortage enabled used-car dealers to continue the brisk business they had enjoyed during the war. By 1948, the number of vehicles on American roads exceeded the number of American households.

Short supplies and heavy demand led to abuses within the industry. During the 1950s legislative efforts were made to protect buyers from unscrupulous dealers. Most states passed laws requiring dealers to give potential buyers accurate information regarding the condition of vehicles. Laws were also enacted prohibiting tampering with odometers.

To help handle the volume of used cars in the American marketplace, auto auctions expanded. During the 1970s, there were approximately 180 auctions throughout the country. Until new car dealers increased their participation in the nation's auction network during the late 1980s and early 1990s, auctions were attended almost exclusively by used-car dealers.

Most new cars were eventually sold on the used-car market. According to a study undertaken by the Federal Highway Administration in 1984, average vehicle ownership was 7.2 years, but average vehicle lifetime was 12 years. A typical vehicle's lifetime mileage totaled 120,000 miles.

Federal legislation aimed at protecting used-car buyers was enacted in May of 1985, but not enforced until 1987. Under the terms of the so-called "Used Car Rule," dealers were required to post window stickers called "Buyer's Guides" describing a car's warranty. The stickers were required to state whether the car came with a full warranty, a limited warranty, or if the car was sold in "as is" condition with no warranty. The Buyer's Guides were legally part of the used-car sales contract and superseded any other claims. In addition, many states added protections, claiming that "as is" sales contracts carried implied warranties that cars were drivable.

Governmental agencies also addressed the problem of odometer tampering. In 1985, federal officials and the Pennsylvania Attorney General's Bureau of Criminal Investigation began an investigation into an odometer fraud scheme. Participants were accused of setting back mileage readings and fraudulently obtaining altered titles. The practice permitted unethical dealers to purchase low-cost, high-mileage cars and sell them at substantial profits.

During the early 1990s, as the U.S. economy experienced sluggish conditions, used-car sales surged. For the first time since World War II, sales of used cars and trucks surpassed sales of new vehicles at new car dealerships. In 1990, an estimated 32.1 million used vehicles were purchased from dealerships, used-car dealers, and through private transactions.

NIADA reported that there were 58,750 independent dealers in the United States in 1998, controlling 24 percent of the used car market. The average price of the used vehicles they sold was $7,172. NIADA also stated that 52 percent of the independent dealer market procured credit through finance companies and that they accounted for 49 percent of buyers at auctions. In the United States, retail sales of used vehicles total approximately $300 billion annually.

Legislative control over used-car sales also continued during the early 1990s at both the federal and state levels. In 1992, Congress passed a law requiring that all states use the same information on titles. One item of concern was the inclusion of permanent salvage brands on auto titles in all 50 states. The bill created a federal task force to focus on eliminating "title washing," a fraudulent procedure which cost U.S. consumers an estimated 3 billion annually. Title washing occurred when unethical used-car traders were able to purchase salvage vehicles and transfer them to a state that did not require a salvage notation on the title. Cars were rebuilt, retitled, and transferred back with clean titles.

Some used-car dealers sold cars to customers who made traditional arrangements for financing. Others provided their own financing to customers who were typically unable to arrange for conventional financing either because they were unable to make a sufficient down payment or because they were judged a poor credit risk. Used-car dealers who provided financing were sometimes referred to as "note lots." Note lots charged high interest rates to cover the expenses associated with high default levels.

The strength of used-car activity brings large franchise dealers into the market. Used-vehicle superstores use a "no-haggle" one-price sales approach in their retailing philosophy. Used-vehicle retailing had been a highly fragmented industry that, historically, had no single market share leader—the megastore concept changed that.

Advanced computer technology offers many possibilities to the used-car industry. One system under development is designed to help match buyers with available cars. Called the Vehicle Information Network, the system permits used car dealers to list vehicles for sale. Car shoppers can call a toll free number to get a list of cars matching their needs. The system is funded through a fee charged to the dealers, and although it is not expected to take the place of more traditional forms of advertising, the possibility has promise as a supplemental form of advertising.

Computers are also being used to track car inventory costs. Some dealers feel that charges for items such as detailing and repairs are easily overlooked during the negotiating process. Computer programs help ensure that all expenses associated with a particular vehicle are considered and that a sale is profitable. In addition, computer software helps determine which cars sell the fastest, which are most profitable, and which are not moving. Another specialized software package helps appraise special interest vehicles such as antiques and other collector cars.

A different type of computer technology is used to develop diagnostic equipment. Dealers can more precisely determine the mechanical condition of cars on their lots and even offer printouts of specific tests to potential customers. One diagnostic tool expected to be perfected uses ultrasound testing to determine if a car has been repaired by "clipping," a procedure in which the vehicle is cut in half and the damaged half is replaced with parts from the same type of automobile.

According to J.D. Power and Associates' 2003 UsedAutoShopper.com survey, online used car sales remained at 47 percent for 2002 and 2003. Scott Weizman, senior director of Internet research for J.D. Power, noted that the "zero percent financing and aggressive incentives may have dampened Internet usage." However, Weizman forecast online sales of at least 50 percent for 2004. During that period, the average age for online shopping for used cars shifted from 40 to 44 years old. The study concluded that consumers still like to make a trip to the dealership prior to purchasing their used car online.

According to some data gathered from two leading auto auction companies, the wholesale prices for used cars showed signs of increasing in 2003. Tom Webb, Manheim;rsquo;s chief economist, concluded that one cause was the incentives offered by the new car dealerships to clear out their 2003 inventory. In short, Webb stated, "heavy new—car incentives have a negative impact on used vehicle prices." Car—Mart's CEO, T.J. Falgout III, agreed in Ward's Dealer Business, and added "As new car manufacturers scale back on incentives, the attractiveness of lower priced new cars will decrease." However, auctions still showed positive results at 34 percent for 2003.

AutoNation, Inc. was the largest automotive retailer in the United States in 1999. Fortune Magazine named it the fastest growing company in America. In 1998, Auto Nation entered the Fortune 500 list at number 151 and jumped to number 83 in the 1999 Fortune rankings. Auto Nation's revenue was more than $16 billion in 1998, an increase from 1997 revenues of $9 billion.

CarMax was a subsidiary of Circuit City Stores, Inc. in 1999. Car Max generated sales of $874.2 million in fiscal year 1998. In June of 1999, it had 30 used-car superstores in operation. The superstore, located at U.S. Route 1, just north of Laurel, Maryland, is the nation's largest used-car retail location. Some additional leaders in 2002 include, Ricart, located in Ohio, Fletcher Jones Motorcars, and Longo Toyota, both located in California, Earnhardt Ford Sales Co., located in Arizona, and Bill Heard—Landmark Chevrolet, based in Texas. Combined, they generated about $387 million in sales. AutoNation Inc. recorded $19.4 billion in 2003 sales. As leader of the largest automobile retail chain, chairman and CEO Michael T. Jackson was honored with the Automotive 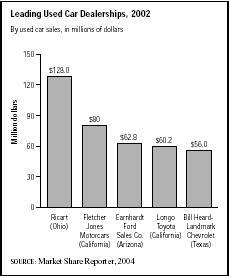 Hall of Fame's Industry Leader of the Year award in 2004.

General Motors was the first manufacturer to enter the used-car business and its Internet Web site could be a prototype for outlets nationwide. They chose Houston, Texas for this project because it was the fourth largest used-car market in the United States. Studies showed that Houston residents were also very open to Internet use. The Web site contained descriptions and set prices along with pictures of the car. Customers, after giving a refundable $100 deposit, could set up an appointment to test drive the vehicle and, if desired, buy it on the spot.

Auto Nation. "About Us," May 2004. Available from http://www.autonation.com