In 2001, the U.S. Census Bureau reported 4,358 establishments engaged in the retail sales of musical instruments, sheet music, and similar supplies. Total employees numbered 34,142 people with an annual payroll of $765.9 million The total number of establishments increased to 10,443 in 2003, and there were 40,034 people employed within the industry. The annual sales totaled $4.8 billion, with the average sales per establishment generating about half a million. The majority of 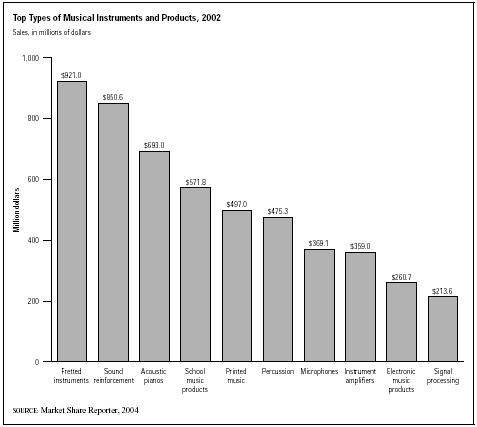 musical instrument stores were concentrated in California with 1,335, Texas with 687, New York with 646, Florida with 580, Pennsylvania with 438, and Illinois with 413. Combined, these firms controlled more than 40 percent of the market.

According to a study by Music Trade magazine, sales in this industry increased at an annual rate of 7 percent during the 1990s. Following a slack market in the 1980s, the industry evolved into a $6 billion dollar trade by 1999. Electronic instruments, particularly keyboards and electric guitars, generated nearly a quarter of all musical instrument sales.

Musical instrument retailers cater to a wide consumer base, ranging from parents of student musicians to professional performers. In general, the industry is dominated by independent family-run businesses. Some firms in this industry succeed within a limited niche, such as sales to schools and senior citizen groups. Industry analysts predicted several prime areas of growth in retail sales of musical instruments as the 20th century drew to a close. Among the rising markets were sales of student pianos and band instruments, which were expected to increase in accordance with the annual 1.2 percent increase of the number of children between the ages of 5 and 13 in the early part of the new millennium. Additionally, nostalgic-minded baby-boomers displayed a renewed interest in traditional and acoustic instruments—especially guitars. Demand for electronic instruments was poised for growth also, as home computer sales increased.

The independent retail outlets that dominated the industry faced potential challenges from the aggressive marketing and low pricing of mail-order discount companies during the 1990s. Some stores dealt with these new competitors by discontinuing high-end inventories that overlapped with the mail-order products. Also during that decade, the impact of superstore-type retail outlets for musical instruments began to be felt. Most imposing among the superstores were Guitar Center of Agoura Hills, California; Sam Ash Music Corporation of Long Island, New York; and the Music and Recording Superstores (MARS), headquartered in South Florida. The MARS chain reported $100 million in revenues from approximately 22 stores in 1998. MARS showrooms are "like candy stores for any kid or adult with even the faintest glimmer of musical interest," according to Jodi Rodgers in South Florida Business Journal. MARS, established in the late 1990s, grew rapidly and went public in April of 1999. Likewise, Guitar Center experienced a swell of growth after an IPO in 1997. The stock value more than tripled within two years, and Guitar Center, which first opened its doors in Beverly Hills, California in 1964, grossed $391.7 million in sales for the fiscal year ending in 1999. At that time observers agreed that the retailer had effectively saturated U.S. markets on the Atlantic seaboard. With 1,730 employees and more than three dozen stores across the United States in 1999, Guitar Center was the largest public retailer of musical instruments and the largest among the superstore retailers.

Guitar Center's sales reached $335 million in 2002, up from $290 million for 2001. Guitar Center continued to further its market presence with 126 Guitar Center stores, 108 of which are located in major markets. Guitar Center diversified and branched out to generate additional market share. For example, in 2001 Guitar Center acquired New York-based American Music Group that had sales of approximately $30 million for 2000. Now, Guitar Center retails band instruments through its American Music division, which operates 19 family music stores that specialize in band instruments for sale or rent. Its Musician's Friend catalog was another way to generate sales for growth. MARS which once held the number two position in sales ended up going out—of—business. Originally, MARS was going to reorganize under Chapter 11 bankruptcy protection on September of 2002, but the company decided to liquidate all its assets instead. At that time, MARS owed musical instrument vendors approximately $13.6 million. In addition, there was about $33 million owed to MARS' prime lender, Congress Financial.