For information on the industry that produces durable goods for athletic competition, exercise, and recreation, see SIC 3949: Sporting Goods Equipment.

One of the most striking features characterizing the industry in the late 1990s and early 2000s was the consumer shift from smaller, local sporting goods stores to so-called "big-box" retailers, or sporting-goods superstores bringing together an exceptionally wide product line under one roof. Combined with the explosive growth in e-commerce sales of sporting and recreational goods, this development gave the industry a complete facelift.

The U.S. Census Bureau reported sales in this industry of $27.99 billion in 2002, continuing a trend of modest growth since the mid-1990s. There were approximately 57,100 retail sporting-goods and bicycle shops in the United States, with the vast majority of them employing fewer than 10 people. The industry as a whole employed some 270,400 workers in 2002.

The types of firms listed in this classification include department and discount stores, franchise chains, specialty shops (bicycles and athletic equipment), mail-order businesses, and e-commerce businesses.

Bicycles are sold in department stores, specialty bike shops, and discount, variety, and hardware stores. The typical American bicycle shop served a customer base of approximately 9,000 persons. Approximately 40 percent of the bicycle shops in the nation were single proprietorships and were primarily "home-owned" facilities. A small percentage of bike shops were business partnerships. Only about 25 percent of U.S. bike shops were as large as corporations in terms of average sales, according to a U.S. Department of Commerce industry profile.

Bicycle shops stocked four major classifications of bicycles: single-speed cruiser bicycles (the average price was $100 to $250); contemporary utility bicycles ($100 to $300); lightweight 10-to 18-speed bicycles (from $300 to more than $2,000); and specialty bicycles, such as mountain bikes, sports models, touring bicycles, folding bicycles, and all-terrain bicycles ($300 to $3,000).

Through the 1970s, the sporting goods industry was dominated by hunting and fishing equipment, and hardware stores competed with sporting goods outlets for business. By the late 1970s and early 1980s, however, several factors began to transform the industry. The nation as a whole grew increasingly health-and fitness conscious, sparking a boom in sales of exercise gear as well as apparel. In addition, the booming participation of women in sports of all kinds opened up whole new markets that only barely existed before. And expanding variety and specialization in equipment for all sports necessitated space for the vast selections now pushed by manufacturers. While adults between the ages of 25 and 44 constituted the mainstay of purchasers, industry leaders recognized a need to focus their marketing strategies on the inclusion of both younger as well as older consumer groups. Combined, these factors vastly transformed the industry's base, toward large retail outlets featuring several departments catering to different sports and activities.

As the fitness industry sparked consumer appeal for exercise equipment, accessories, and athletic wear, trends gradually shifted from sporting goods stores, which were typically sole proprietorships and small "pro shops," to franchises and eventually sporting goods chains. Bicycle shops even began changing their names to "bicycling and fitness" shops and expanded their product mixes to include exercise bicycles, treadmills, climbers, and weight machines to capitalize on the craze. These types of stores appealed to a growing number of consumers who were exercising in their own homes.

Consumers started turning to discount chains and stores because they knew what equipment to purchase. When the technology was new, customers were more in need of experts to explain the products and their benefits before making a major purchase. As consumers used more types of exercise equipment and became more knowledgeable about fitness, however, they grew much more familiar with the types of equipment they needed. Consequently, store managers were changing their store displays to enable customers to "test drive" a product before taking it home. Such hands-on displays often proved helpful in alleviating customers' anxiety about assembly. Seeing the assembled product in the store could convince them that it was easy to set up at home.

Sales of American-made bicycles also remained relatively flat in the late 1980s. This was due in part to delivery delays that kept popular models out of shops. The European mountain-bike boom drained American supplies and left many dealers in the United States with unfilled orders. All in all, bicycle shops reported spotty sales on some popular bikes in 1990. East Coast bicycle shop dealers reported flat sales in 1990, but their counterparts on the West Coast reported an 8 percent sales increase.

Firearms, ranging from handguns to hunting rifles to assault weapons, had long been available from sporting goods stores with virtually no guidelines. In 1993 and 1994, however, that changed. The Brady Bill, a piece of legislation championed by the Clinton administration that mandated a five-day waiting period before a consumer could purchase a gun, was ratified into law over the objections of the National Rifle Association and others. A ban on the manufacture and sale of 19 types of assault weapons also passed in May 1994. MCI Communications Corp. developed an automated system that enabled the registration approval process to be completed within the mandatory 10-day waiting period. The former, and less expedient, postal process required up to 20 days for completion.

The early 1990s were prosperous for privately owned Herman's Sporting Goods Inc. as it posted $570 million in yearly sales. The effective marketing strategy by Sports Authority of providing the consumer with a wide selection of in-stock merchandise and low prices, however, reduced Herman's sales by more than $230 million. This paralyzing situation caused the 117-store, octogenarian chain to file for Chapter 11 protection in April 1996, ushering in the modern period of domination by Sports Authority.

Sporting goods stores, traditionally a fragmented market, spent the 1990s and early 2000s in a massive wave of consolidation. Big-box chains grew to dominate the market and swallowed up smaller, less efficient competitors. These larger firms enjoyed greater leverage with suppliers and manufacturers, resulting in lower prices and higher margins, not to mention assistance in promotional activities and inventory management. The most notable such consolidation was the merger in 2002 of the two industry leaders, Sports Authority and Gart Sports, making Sports Authority the industry's first and only national chain.

The encroachment of big-box retailers with greater economies of scale has seriously damaged the specialty retailers, particularly in categories such as exercise equipment, where big-box stores reign supreme. Particularly as technology has improved and the difference between introductory models and high-end models has grown hazy, the more value-added service provided by specialty retailers failed to overcome the overall price and service advantages big-boxes offered. According to the National Sporting Goods Association, between 2000 and 2001, the share of treadmill sales at specialty retailers fell from 14 percent to only 5 percent, while the share claimed by mass merchants grew from 67 percent to 76 percent.

Following the shakeout of many of the late 1990s' biggest e-commerce stars, a crop of new and established e-tailers moved aggressively into the sporting goods market to grab some of the untapped online share. General e-tailers such as SportsLine.com and Sportsrus.com joined specialty online stores like Golfballs.com and Baseball Warehouse in rebuilding the market for online sporting goods sales. In 2003, moreover, these firms were joined by e-commerce giant Amazon.com, which opened a Sporting Goods section on its Web site.

Bicycles represented a highly competitive $6 billion sector. Longtime market leader Schwinn, a subsidiary of Pacific Cycle, filed for bankruptcy in 2001. By the middle of the decade, the company concentrated its efforts on less expensive children's bicycles, primarily for sale at mass retailers like Wal-Mart. In its place, longtime industry players such as Huffy sparred with foreign upstarts, like China-based Giant, which forced their way to the leading spots in the U.S. bicycle market, In retaliation, U.S. manufacturers, including Huffy and Cannondale, tried to break into foreign markets. 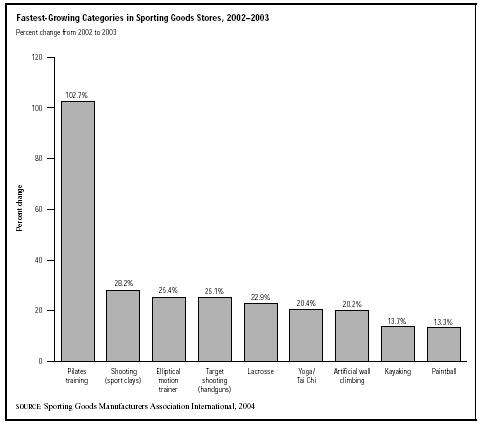 Sales of mountain bikes skyrocketed through the 1990s, but sales leveled off by the mid-2000s. Meanwhile, the casual and recreational cyclists represented the fastest-growing sector of the bicycle market. Intense industry competition and the spread of innovative high-end racing technology forced prices downwards in the market for specialty, mountain, road, and racing bicycles. The line between high-end bikes and their moderately priced counterparts blurred significantly through the 1990s and early 2000s.

Sports Authority clearly dominated the sporting goods market. Its merger with Gart Sports in 2003 pushed it even further into the industry's leadership position and vastly expanded its operations, adding 12 states and 180 stores to its formidable network. Company founder Jack Smith was a former executive at Herman's World of Sports, the industry leader that was eventually pushed out of the market by Smith's upstart firm. Sports Authority boasted 389 outlets across 45 states in 2003, operating under Sports Authority, Gart Sports, Oshman's, and Sport Mart monikers, with plans to phase in Sports Authority name at all these stores. The firm maintained a payroll of 7,760 employees in 2003, when it raked in sales of $1.43 billion, up slightly over 2001 but still far below the 2001 peak of $1.5 billion. Sports Authority planned to continue opening new stores and expanding into new territory through the mid-2000s.

With headquarters in El Segundo, California, Big 5 Sporting Goods Corporation was a leader in the western United States, with over 290 stores in 10 states selling a wide range of products for each major industry category. With 7,123 employees, Big 5 enjoyed a sales increase of 6.3 percent to $709.7 million in 2003.

Dick's Sporting Goods Inc. was another major industry player, based in Pittsburgh. The firm sold industry apparel and footwear in addition to a wide range of team sport, exercise, and outdoor equipment at over 160 stores in 27 states throughout the eastern United States.

Gander Mountain Company, of Minneapolis, was another specialist in the outdoor recreational category, with 65 stores throughout the Midwestern United States. Sales jumped 13.7 percent in 2003 to reach $357 million. Waterford, Michigan-based Dunham's Athleisure Corporation was another major presence in the Midwest, with 100 stores selling major brand sporting equipment. Sports Chalet Inc. employed 2,275 workers at some 30 stores in Southern California, with revenues of $238 million in 2003.