Companies included in this category are those that dye and finish textiles, not elsewhere classified, such as bleaching, dyeing, printing, and finishing of raw stock, yarn, braided goods, and narrow fabrics, except wool and knit fabrics. These establishments perform finishing operations on purchased textiles or on a commission basis.

Most companies in this category dye raw stock or yarn. (Any fiber maybe dyed in the raw stock or yarn form.) Business declined steadily throughout the late 1990s and early 2000s for companies engaged in raw stock or package dyeing. Although analysts had expected business to keep rising because "fancy" fabrics, such as plaids, stripes, and various patterns, required that yarn be colored prior to weaving or knitting, demand throughout the textile industry began to wane. As of early 1997, the North American Free Trade Agreement (NAFTA) had brought increased imports from this and most other textile categories from Canada and Mexico.

Industry leader Knoll Inc. of East Greenville, Pennsylvania, which focused more of its attention on its office furniture business, generated 2002 sales of $950 million while employing 3,816 workers. In 1999 Warburg Pincus Ventures LP, which had purchased 60 percent ownership of Knoll from Westinghouse Electric in 1996 for $565 million, sought to buy out the remaining 40 percent of the stock that Knoll offered at $17 a share when going public in 1997. When Warburg initially offered $25 per share, 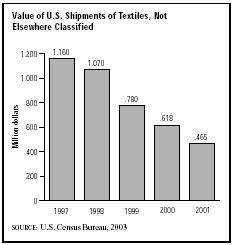 shareholders (some of whom had paid as much as $40 per share) countered with a lawsuit contending that Warburg's majority ownership prevented competitive bidding. Shareholders agreed on a selling price of $28 per share, which Warburg agreed to pay in cash, amounting to $495 million. After acquiring complete ownership of Knoll, Warburg took the company private.

Rounding out the top three industry leaders were Milwaukee-based Meridian Industries, which generated 2003 sales of $300 million with 1,500 employees, and Coats North America Consolidated of Charlotte, North Carolina, which garnered $334 million in 2003 sales while employing 4,225 workers.

In the early 2000s, approximately 450 U.S. companies were engaged in finishing textiles, not elsewhere classified. This represented a substantial increase from the 178 firms reported in 1991. In 2001, these businesses shipped $465.6 million worth of goods, which was less than half of the $1.2 billion shipped in this category in 1991. Textile and fabric finishers employed 24,294 people in 2000, with a total annual payroll of $653 million.