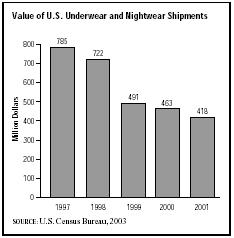 Almost all products in this category are made on circular knitting machines. Most men's and boys' underwear is made from 100 percent cotton or cotton-polyester blends. Until recently, most women's and girls' underwear was produced from nylon, with silk used as somewhat of a luxury item. By the 1990s the trend in women's underwear was to use cotton. During the late 1980s and early 1990s, some companies began modeling women's lines after men's cotton briefs. Such products were successful.

According to the Census Bureau's 2002 Current Industrial Report on Apparel, underwear and nightwear accounted for a large portion of all women's and men's apparel production. There were 305 million units of men's underwear and nightwear produced and 891 million units of women's; however, the value of the underwear—$661.4 million for men's and $2.7 billion for women's—was far below that of all other apparel.

The early 1990's saw a healthy growth in underwear and nightwear exports. This trend was expected to continue, in part because trade restrictions were reduced by the 1994 passage of the North American Free Trade Agreement (NAFTA). The entrance of China into the World Trade Commission was expected to boost exports to Asia in the early 2000s.