This industry consists of establishments primarily engaged in manufacturing chewing and smoking tobacco and snuff. Other tobacco product industries are discussed in SIC 2111: Cigarettes; SIC 2121: Cigars; and SIC 2141: Tobacco and Redrying.

In the early 2000s the $1.8 billion U.S. smokeless tobacco industry continued to be dominated by UST Inc., the largest manufacturer and distributor of chewing tobacco and snuff in the United States with $1.74 billion in 2003 sales. In a distant second place was Conwood Sales Co. L.P., with $154.3 million in 2003 sales. Several others, including Swedish Match North America Inc. (formerly Pinkerton Tobacco Co), National Tobacco, Swisher, and Brown and Williamson, also compete for a small percent of this industry.

UST, with its Skoal and Copenhagen brands, consistently accounts for more than 80 percent of sales in the moist snuff category and is the overall sales leader for smokeless tobacco. The popularity of its Kodiak brand enables Conwood to control more than 10 percent of the moist snuff market. Swedish Match (Red Man and Granger brands) is the market leader in the loose-leaf category and is a strong competitor with UST and Conwood for total sales of smokeless tobacco.

The snuff business enjoyed an upsurge in the mid-1970s after nearly half a century of lackluster sales. The hardcore market remained in the South among the older population. However, in the mid-1970s, snuff began to regain some popularity, especially as young men turned to it because they thought it was a safe alternative to cigarettes. Labels warning of dangers and a ban on television and radio advertising of smokeless tobacco were not required until 1986, when the U.S. Surgeon General proclaimed it a cause of mouth cancer and other oral diseases.

Demand for smokeless tobacco rose sharply during the 1980s and early 1990s. Among smokeless products, moist snuff was the leader with total U.S. output rising 83 percent—from 30 million pounds in 1981 to 55 million pounds in 1993. In the early 1990s, as cigarette and cigar volume dropped, smokeless tobacco products grew between 3 and 5 percent in sales volume annually. By the mid-1990s moist snuff had become the largest segment in terms of both total sales and volume produced. The increase was due to a number of factors: increased smoking restrictions, promotions and advertising, and the waning impact of tax hikes, negative publicity, and health warnings. Manufacturers of loose-leaf, plug, and dry snuff experienced a slow slide in volume sales but maintained profits through price increases.

So far smokeless tobacco companies have found creative alternatives to counter governmental restrictions. Advertising in magazines and at auto races and rodeos, as well as through direct mail campaigns, has been crucial in boosting sale and developing brand loyalty. These well-organized promotions and the introduction of new flavors strengthened sales of both loose-leaf tobacco and moist snuff in the late 1990s.

The industry faced many challenges in the early 2000s as the public became more concerned about tobacco-related health issues. The late 1990s and early 2000s saw a flurry of legal activity as states sued companies to compensate state health-care providers for the cost of treating tobacco-related illnesses. In addition to the suits for smoking tobacco, UST and other smokeless tobacco producers were sued for injuries that plaintiffs claimed were caused by chewing tobacco. However, industry leaders such as UST enjoyed high profit margins; smokeless tobacco sales, particularly snuff sales, continued to rise as consumers associated more health risks with cigarettes. In fact, although chewing tobacco sales declined 6 percent to 43 million pounds between 2002 and 2003, snuff sales increased 3 percent to 71.6 million 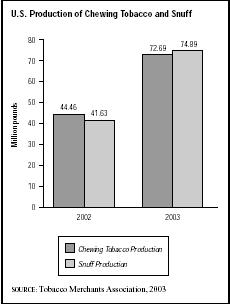 The future growth of the smokeless tobacco industry depends not only on public opinion of tobacco products but also on governmental regulation that could affect advertising and raise prices.