In 1994, three-quarters of the industry's revenues were derived from motor carrier work (including the leasing of trucks with drivers). A total of 63 percent of these revenues came from local trucking and the remainder from long-distance trucking. The industry's nonmotor carrier derived revenues from such activities as parking and storing vehicles, snow plowing, repair work and truck terminal leasing for other carriers, and the lease and rental of vehicles without drivers. Industry firms generally are classified as "specialty freight" carriers, because the materials they transport—typically household goods—require special equipment for loading, unloading, or transport.

Local firms that both moved and stored household goods comprised roughly 20 percent of the total U.S. household goods moving industry in 1987, with the remainder divided between non-local household goods movers and local truckers that did not offer storage. Typically, most residential moves occur in the summer, and industry revenues often drop by as much as 50 percent during the winter months. As a result of such revenue fluctuations, many local moving and storage firms have supplemented their core moving business with other services, including off-season commercial and business office relocation, less-than-truckload (i.e., less than 10,000 pounds of goods per truckload) freight transport, third-party logistics, and warehousing.

A growing trend in American industry in the 1980s and 1990s was the "just-in-time" production management system, in which manufacturers lowered their inventory costs by maintaining only a short-term stock of manufacturing materials. Shippers of manufacturing materials responded to this trend by warehousing goods in the same locality as their customers, enabling them to respond more quickly to continual changes in their customer's orders while also lowering shipping expenses. Local trucking and storage companies participated in this trend by providing transport, warehousing, and logistics services to shippers and their customers. In third-party logistics arrangements, local trucking and storage firms provided storage, inventory control services, packing or crating of goods, or pickup and delivery of shipments. Goods were stored in the customer's warehouse, the trucking firm's warehouse, or in "dedicated" warehouses owned by the trucking firm but maintained exclusively for the customer. Inventory management could be handled by the customer in the trucker's storage facility or by the local trucking firm itself. Some firms maintained small warehouses called "parts banks" where important components were kept ready for immediate (1-4 hour) delivery to customers.

Many of the same firms that dominated the national intercity moving industry in the late 1990s—Bekins, Mayflower, Allied, North American, and U-Haul, for example—also operated in the local trucking and storage industry and were among the leaders in developing the nontraditional less-than-truckload and logistics services markets. Far more common, however, were smaller firms such as Kane Is Able Inc., Nice Jewish Boy Moving and Storage, Frozen Food Express, and Beverly Hills Transfer and Storage Inc.

In the mid-1990s, important trends in the local-trucking-with-storage industry included continued diversification into new areas of business: some companies, for example, would offer to pack up a company's computers, move them to a new office location, and reinstall them so employees could begin work immediately. 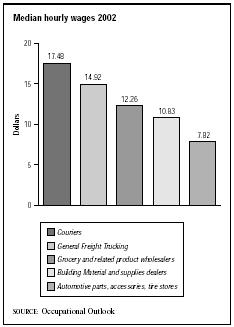 In 2002, the median salary for delivery and light duty truck drivers was $11.48 per hour. Intense competition in the industry has driven up truckers' wages. At the same time, industry firms also concentrated on developing ways to retain drivers, such as only hiring drivers from within the company or offering generous benefits and profit-sharing plans. There was virtually no unemployment in the truck driving industry, and the labor shortage was expected to worsen into the mid-2000s.

The highest costs in the industry were labor-related. Other costs were associated with retrofitting trucks to meet new diesel emissions standards. Diesel emissions were to be cut by up to 90 percent by 2007. In the 2000s, the Transportation Security Administration was looking into the viability of requiring locks on all truck cargo areas.