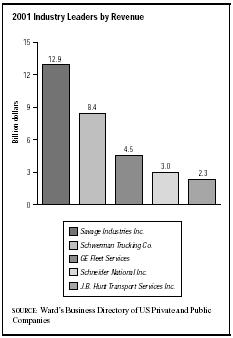 Trucks represent virtually the sole means of transporting freight in intracity and local markets—operating zones of 50 miles or less. Such diverse products as bakery goods, dry cleaning, auto products, fuel for service station pumps, and vending machine supplies are only a few of the enormous variety of goods delivered by local trucking firms.

Although over-the-road intercity truckers are the most visible segment of the industry as a whole, the trucking industry itself grew out of local, short-haul trucking in the early years of the twentieth century, when automobiles began to be converted into trucks to haul the freight traditionally transported by horse-drawn wagons.

For the industry segment involving mail, package, and freight delivery, the 2002 leader was United Parcel Service Inc., with revenues of $31.3 billion. In 2003, the company reported sales of $33.5 billion and 355,000 employees. Named the "World's Most Admired" company in the industry in 2004 for the sixth year in a row, UPS handled approximately 13 million packages each day. UPS joined the Environmental Protection Agency in 2004 in working to reduce harmful gas emissions from delivery vehicles. In second place was FedEx Corp., with $20.6 billion in revenue.

For the industry segment involving trucking and truck leasing, Ryder System Inc. was the 2002 industry leader, with $4.8 billion in revenue. With a fleet of 135,000, Ryder employed 26,700 workers in 2003. Other leaders in this segment were CNF Inc., Yellow Corp., and Roadway Express Inc.

Another important segment of the local non-storage trucking industry is comprised of light haulage and cart-age truckers including warehouse goods transporters, freight forwarders (see SIC 4731: Arrangement of Transportation of Freight and Cargo ), and distributors and goods transfer services. The industry also includes significant numbers of dump truck hauling firms, local log and timber transporters, bulk mail contract carriers, and "star route" carriers, which transport goods between transportation modes, such as from a port to a railhead.

In the late 1990s, a smaller segment of the local nonstorage trucking industry consisted of highly specialized carriers such as hazardous materials transporters, like Enviroguard Technologies and Omega Environmental Control; local animal, livestock, and horse transporters, such as Ft. Worth Cattle Express and Hickory Hill Horse Transport; and local pet transporters, such as Pet' in on the Ritz and Happy Tails to You. The industry also included a variety of local household goods movers who did not offer storage services, ranging from the local divisions of large intercity movers like Bekins, to smaller firms like Starving Scholars Movers; Shleppers Movers; and Load, Lock, and Roll Moving.

By the late 1990s, many local non-storage-trucking firms were unionized. Overall, the local general freight trucking industry reported nearly $15.0 billion in revenue in 2001, down from about $15.2 billion in 2000. The local specialized freight trucking industry reported revenues of $25.4 billion in 2001, a slight gain over $25.3 billion in 2000. According to the Occupational Outlook Handbook, some drivers in this industry also have sales duties. There were 431,000 employed in this capacity in 2002. The overall employment expectation was for steady growth into 2012.

In 2004, the Transportation Security Administration was looking into the viability of requiring locks on all truck cargo areas. Companies were concerned about the cost of such a standard, and trucking companies that make frequent stops, such as UPS, were concerned about delivery delays such locks would create.