On June 1, 2001, the International Council of Toy Conferences announced that toy sales worldwide reached $69.5 billion. In 2001, the American toys and hobby goods wholesaling industry was composed of 3,025 establishments. The industry employed about 36,890 workers. In 2003, there were a total of 31,100 establishments that generated about $27,883.60 million. The toy and hobby goods and supplies represented 27 percent of the total market, or 8,380 establishments. The majority of the industry was located in California, Florida, Illinois, Michigan, New York, Ohio, Pennsylvania, Texas, and Washington.

Wholesale distributors of toys experienced a shrinking customer base in the early 1990s, as national toy store chains and discount stores began to buy directly from manufacturers. Sales in the mid-1990s continued to grow, up by 20 percent from 1992 to $20 billion. However, since 1992 expenses have been rising faster than sales. While toy distributors were once the most important customers at toy fairs, Toys 'R' Us became the leading toy retailer in the mid-1990s and had the most purchasing clout with toy manufacturers, accounting for 20 percent of U.S. toy sales in 1996. Sydney Ladensohn Stern and Ted Schoenhaus, authors of Toyland: The High Stakes Game of the Toy Industry, wrote that toy manufacturers referred to the wholesale distributors as "dinosaurs because they used to be the toy company's most powerful customers, and today they are almost extinct." However, wholesale distributors of toys continue to supply smaller, independent toy stores and department stores, and still regarded their industry as playing a pivotal role in the toy marketplace.

Value-added Services and the Role of the Distributor Consolidation of toy manufacturers and retailers meant massive changes for the distribution network of the toy industry. Eliminating the added expense of distributor-ships, major toymakers were able to offer volume discounts to toy stores and other retailers of toys. Furthermore, toy store chains such as Toys 'R' Us established their own distribution centers from which to supply their stores. In 1995, the pressure on distributors increased as more manufacturers went to direct distribution of their products, an effort led by Marvel comic books and Citadel Miniatures. This second wave in the direct distributorship drive proved even more vexing for the wholesalers because the manufacturers involved introduced the licensing of retail outlets. These licensed dealers received delivery of new product releases before non-licensed dealers and wholesalers, which further tightened the market for distributors.

Consequently, toy and hobby wholesale distributors targeted smaller retail stores and chains, offering merchandise from the smaller manufacturers. They also expanded their industry to include the distribution of hobby and craft items. Distributors recognized that service was vital to their survival in a tough market.

William L. MacMillan, executive director of the Toy and Hobby Wholesalers Association in 1991, noted in a 1991 article in Playthings magazine that the distributor could still offer many unique services to both retailers and manufacturers. For instance, the distributor, having associations with thousands of products and retailers, was able to provide valuable information to toymakers and toy sellers. MacMillan suggested that the wholesaler could act as a consultant to new retailers, advising them about such issues as the proper quantities to keep in stock and the benefits of certain promotional techniques. Furthermore, MacMillan observed, the distributor could provide valuable services to manufacturers by offering information on how various products were selling in specific markets, providing advertising aid through distributor-sponsored promotions and in-store displays, and providing sales training to store personnel.

The distributors' volume buying power meant they could offer retailers lower prices than the manufacturer, and by maintaining fully stocked warehouses, distributors also helped save retailers and manufacturers inventory space. In addition, a computer network for ordering, sales, and inventory became perhaps the most important value-added service. Through such a network, distributors provided an efficient means of sharing information with both manufacturers and retail clients.

According to a survey of the entire wholesale distribution industry, consolidation of the distribution industry led to fewer but stronger competitors able to offer a wide range of services including volume discounts, improved financing options, and adoption of state-of-the-art warehouse technology.

Although consolidation of the retail toy industry forced many distributors out of business, those that remained were more efficient and were able to explore smaller manufacturers and retail accounts, including independent drug and specialty stores.

Craft and Hobby Boom The crafts and hobby industry experienced a renewed popularity in the early 1990s, probably due to a return to homemade gifts and decorations prompted by economic recession. A 1994 survey by the trade group Hobby Industries of America found that participation in crafts or hobbies had increased, with 81 percent of U.S. households participating in a particular craft or hobby, compared to 77 percent four years earlier.

New Technology's Impact Probably the most intriguing change in the toy industry was the birth of the Internet. Companies such as eToys, founded in 1996, gained considerably publicity during the 1999 Christmas season. eToys offered buyers the opportunity to shop at home for hard-to-find toys rather than braving crowded stores and frenzied shoppers. The company's sales in 1999 were $30 million, but that represented a 4,267 percent jump from the previous year. There are numerous concerns and challenges surrounding the concept of e-trade, but there is no question that as the technology improves, online toy shopping will become an important element of the sales structure.

According to Playthings magazine, the toy industry has had to go 'back to the drawing board." Joe Diaz, president of the Learning Express since 1987, agreed in an interview that if independent retailers 'cannot find a way to cooperate, they will not survive." Long time toy retailers KB Toys, FAO Schwarz, Inc., Zany Brainy, and The Right Start filed for Chapter 11 bankruptcy protection following the 2003 Christmas season.

The five top leaders in the toy industry controlled almost 60 percent of the overall market share. According to the Market Share Reporter, Wal-Mart accounted for 20 percent of the market, Toys 'R' Us claimed 17 percent, Target generated 8 percent, while Kmart had 6 percent, and KB Toys had 5 percent. In addition, Wal-Mart dominated as the top toy and game retailer in 2001 with 28.04 percent. Toys 'R'Us followed with 22.79 percent, KB Toys with 6.76 percent, Kmart with 6.75 percent, and Target with 6.74 percent.

Craft items continued to be a favorite among consumers. According to the Market Share Reporter, "Americans were spending more time at home." Michaels Stores were the leaders with $2.5 billion, followed by Jo Ann Stores with $1.6 billion, Hobby Lobby had $1 billion, followed by a distant fourth, Frank's Nursery& Crafts with $371 million. 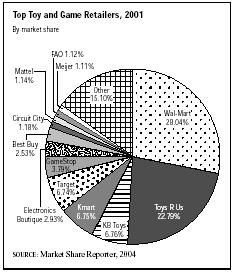 Applause, LLC is best known for its plush toys, including characters from Sesame Street and Disney. It was created in 1995 when Dakin, a plush toy manufacturer, merged with a company founded by Wallace Berrie, brother of rival novelty manufacturer Russ Berrie. In addition to plush toys it produces items such as magnets, keychains, and tableware decorated with its licensed characters (such as Looney Tunes and the Muppets).