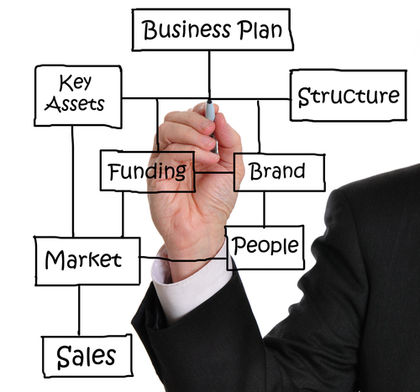 Aggregate planning is the process of developing, analyzing, and maintaining a preliminary, approximate schedule of the overall operations of an organization. The aggregate plan generally contains targeted sales forecasts, production levels, inventory levels, and customer backlogs. This schedule is intended to satisfy the demand forecast at a minimum cost. Properly done, aggregate planning should minimize the effects of shortsighted, day-to-day scheduling, in which small amounts of material may be ordered one week, with an accompanying layoff of workers, followed by ordering larger amounts and rehiring workers the next week. This longer-term perspective on resource use can help minimize short-term requirements changes with a resulting cost savings.

In simple terms, aggregate planning is an attempt to balance capacity and demand in such a way that costs are minimized. The term "aggregate" is used because planning at this level includes all resources "in the aggregate;" for example, as a product line or family. Aggregate resources could be total number of workers, hours of machine time, or tons of raw materials. Aggregate units of output could include gallons, feet, pounds of output, as well as aggregate units appearing in service industries such as hours of service delivered, number of patients seen, etc.

Aggregate planning does not distinguish among sizes, colors, features, and so forth. For example, with automobile manufacturing, aggregate planning would consider the total number of cars planned for not the individual models, colors, or options. When units of aggregation are difficult to determine (for example, when the variation in output is extreme) equivalent units are usually determined. These equivalent units could be based on value, cost, worker hours, or some similar measure.

Steps taken to produce an aggregate plan begin with the determination of demand and the determination of current capacity. Capacity is expressed as total number of units per time period that can be produced (this requires that an average number of units be computed since the total may include a product mix utilizing distinctly different production times). Demand is expressed as total number of units needed. If the two are not in balance (equal), the firm must decide whether to increase or decrease capacity to meet demand or increase or decrease demand to meet capacity. In order to accomplish this, a number of options are available.

Options for situations in which demand needs to be increased in order to match capacity include:

Options which can be used to increase or decrease capacity to match current demand include:

There are two pure planning strategies available to the aggregate planner: a level strategy and a chase strategy. Firms may choose to utilize one of the pure strategies in isolation, or they may opt for a strategy that combines the two.

A level strategy seeks to produce an aggregate plan that maintains a steady production rate and/or a steady employment level. In order to satisfy changes in customer demand, the firm must raise or lower inventory levels in anticipation of increased or decreased levels of forecast demand. The firm maintains a level workforce and a steady rate of output when demand is somewhat low. This allows the firm to establish higher inventory levels than are currently needed. As demand increases, the firm is able to continue a steady production rate/steady employment level, while allowing the inventory surplus to absorb the increased demand.

A second alternative would be to use a backlog or backorder. A backorder is simply a promise to deliver the product at a later date when it is more readily available, usually when capacity begins to catch up with diminishing demand. In essence, the backorder is a device for moving demand from one period to another, preferably one in which demand is lower, thereby smoothing demand requirements over time.

A level strategy allows a firm to maintain a constant level of output and still meet demand. This is desirable from an employee relations standpoint. Negative results of the level strategy would include the cost of excess inventory, subcontracting or overtime costs, and backorder costs, which typically are the cost of expediting orders and the loss of customer goodwill.

A chase strategy implies matching demand and capacity period by period. This could result in a considerable amount of hiring, firing or laying off of employees; insecure and unhappy employees; increased inventory carrying costs; problems with labor unions; and erratic utilization of plant and equipment. It also implies a great deal of flexibility on the firm's part. The major advantage of a chase strategy is that it allows inventory to be held to the lowest level possible, and for some firms this is a considerable savings. Most firms embracing the just-in-time production concept utilize a chase strategy approach to aggregate planning.

Most firms find it advantageous to utilize a combination of the level and chase strategy. A combination strategy (sometimes called a hybrid or mixed strategy) can be found to better meet organizational goals and policies and achieve lower costs than either of the pure strategies used independently.

An example of a completed informal aggregate plan can be seen in Figure 1. This plan is an example of a plan determined utilizing a level strategy. Notice that employment levels and output levels remain constant while inventory is allowed to build up in earlier periods only to be drawn back down in later periods as demand increases. Also, note that backorders are utilized in order to avoid overtime or subcontracting. The computed costs for the individual variables of the plan are as follows:

Backorders = $10 per unit per period

A second example, shown in Figure 2, presents the same scenario as in Figure 1 but demonstrates the use of a combination strategy (i.e., a combination of level and chase) to meet demand and seek to minimize costs. For this example, let's assume that company

Figure 1
policy prevents us from utilizing backorders and limits our plan to no more than 50 units of overtime per period. Notice that the regular output level is constant, implying a level workforce, while overtime and subcontracting are used to meet demand on a period by period basis (chase strategy). One will notice that the cost of the combination plan is slightly lower than the cost of the level plan.

The following are some of the better known mathematical techniques that can be used in more complex aggregate planning applications.

Linear decision rule is another optimizing technique. It seeks to minimize total production costs (labor, overtime, hiring/lay off, inventory carrying cost) using a set of cost-approximating functions (three of which are quadratic) to obtain a single quadratic equation. Then, by using calculus, two linear equations can be derived from the quadratic equation, one to be used to plan the output for each period and the other for planning the workforce for each period.

The management coefficients model, formulated by E.H. Bowman, is based on the suggestion that the production rate for

It then uses regression analysis to estimate the values of a, b, c, and K. The end result is a decision rule based on past managerial behavior without any explicit cost functions, the assumption being that managers know what is important, even if they cannot readily state explicit costs. Essentially, this method supplements the application of experienced judgment.

The search decision rule methodology overcomes some of the limitations of the linear cost assumptions of linear programming. The search decision rule allows the user to state cost data inputs in very general terms. It requires that a computer program be constructed that will unambiguously evaluate any production plan's cost. It then searches among alternative plans for the one with the minimum cost. However, unlike linear programming, there is no assurance of optimality.

A number of simulation models can be used for aggregate planning. By developing an aggregate plan within the environment of a simulation model, it can be tested under a variety of conditions to find acceptable plans for consideration. These models can also be incorporated into a decision support system, which can aid in planning and evaluating alternative control policies. These models can integrate the multiple conflicting objectives inherent in manufacturing strategy by using different quantitative measures of productivity, customer service, and flexibility.

The functional objective search (FOS) system is a computerized aggregate planning system that incorporates a broad range of actual planning conditions. It is capable of realistic, low-cost operating schedules that provide options for attaining different planning goals. The system works by comparing the planning load with available capacity. After management has chosen its desired actions and associated planning objectives for specific load conditions, the system weights each planning goal to reflect the functional emphasis behind its achievement at a certain load condition. The computer then uses a computer search to output a plan that minimizes costs and meets delivery deadlines.

For manufacturing firms the luxury of building up inventories during periods of slack demand allows coverage of an anticipated time when demand will exceed capacity. Services cannot be stockpiled or inventoried so they do not have this option. Also, since services are considered "perishable," any capacity that goes unused is essentially wasted. An empty hotel room or an empty seat on a flight cannot be held and sold later, as can a manufactured item held in inventory.

Service capacity can also be very difficult to measure. When capacity is dictated somewhat by machine capability, reasonably accurate measures of capacity are not extremely difficult to develop. However, services generally have variable processing requirements that make it difficult to establish a suitable measure of capacity.

Historically, services are much more labor intensive than manufacturing, where labor averages 10 percent (or less) of total cost. This labor intensity can actually be an advantage because of the variety of service requirements an individual can handle. This can provide quite a degree of flexibility that can make aggregate planning easier for services than manufacturing.

Rudy Hung, in his Production and Inventory Management Journal article entitled "Annualized Hours and Aggregate Planning," presents a new, useful idea for aggregate planning called Annualized Hours (AH). Under AH, employees are contracted to work for a certain number of hours (say 1,800 hours) per year, for a certain sum of money. Employees can be asked to put in more hours during busy periods and fewer hours in slow periods. Typically, employees receive equal monthly or weekly payments so that hourly workers in effect have gained salaried status. Overtime is paid only when employees have worked beyond their annual hours.

AH is also known as flexiyear, as it can be seen as an extension of flextime, in which employees can vary their work hours within limits. This concept is used almost exclusively in Europe, particularly in the United Kingdom. The Scandinavian pulp and paper industries pioneered AH in the mid-1970s. Around that time, some West German firms, particularly those in the retail industry, also used AH.

AH gives employers much flexibility. AH serves to cut labor costs by offering employees an annual sum less than their previous annual earnings with overtime. Even though their total earnings may fall, their average earnings per hour would remain the same or even rise. Effective earnings could rise even more so if the employer is unable to consume all contracted hours. Employees have greater income security with no worries about layoffs. There is also increased morale because blue-collar workers are now salaried.

Another development affecting aggregate planning is postponement. This refers to delaying the "finish" of a product until the moment of sale. Firms that rely on the postponement strategy, such as PC-maker Dell Inc. or clothing franchise Benetton Group Sp.A., depend upon the availability of aggregate inventories of components that can be assembled to order shortly after, or even immediately, as an order is taken.

Your article is so useful in helping me to understand this inventory course I am taking.

Finally i understood what an aggregate planning is!!! thank u