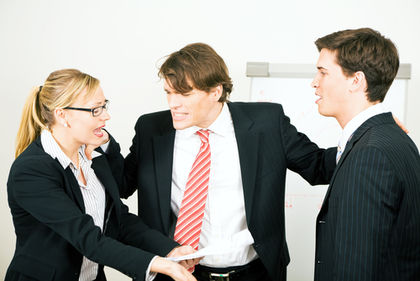 The term conflict refers to perceived incompatibilities resulting typically from some form of interference or opposition. Conflict management, then, is the employment of strategies to correct these perceived differences in a positive manner. For many decades, managers had been taught to view conflict as a negative force. However, conflict may actually be either functional or dysfunctional. Whereas dysfunctional conflict is destructive and leads to decreased productivity, functional conflict may actually encourage greater work effort and help task performance. Borisoff and Victor (1998) point out, "We have come to recognize and to acknowledge the benefits dealing with conflict affords. Because of our differences, we communicate, we are challenged, and we are driven to find creative solutions to problems."

THE EVOLUTION OF CONFLICT
MANAGEMENT

The early approach to conflict management was based on the assumption that all conflict was bad and would always be counterproductive to organizational goals. Conflict management, therefore, was synonymous with conflict avoidance. This left the people experiencing the conflict with essentially only one outcome: a win-lose scenario. In such cases, the loser would feel slighted and this, in turn, would lead to renewed belligerence. Therefore, most managers viewed conflict as something they must eliminate from their organization. This avoidance approach to conflict management was prevalent during the latter part of the nineteenth century and continued until the mid-1940s.

The human relations view of conflict management dominated from the late 1940s through the mid-1970s. This viewpoint argued that conflict was a natural and inevitable occurrence in any organizational setting. Because conflict was considered unavoidable, the human relations approach recommended acceptance of conflict. In other words, conflict cannot be eliminated and may even benefit the organization. It was during this time period that the term "conflict management" was introduced, according to Nurmi and Darling.

Since the mid-1970s a new position on organizational conflict has emerged. This theoretical perspective is the interactionist approach. This viewpoint espouses not only accepting conflict, but also encouraging it. Theorists are of the opinion that a conflict-free, harmonious, and cooperative organization tends to become stagnant and nonreponsive to market change and advancement. Therefore, it is necessary for managers to interject a minimum level of conflict to maintain an optimal level of organizational performance. For example, Shelton and Darling suggest conflict is a necessary condition for both individual and organizational progression. They encourage managers to "embrace conflict and use it for continuous transformation."

According to both Daft and Terry, several factors may create organizational conflict. They are as follows:

Management theorists have developed and suggested a range of options for handling organizational conflict. Figure 1 outlines the various components of the Conflict Resolution Grid, which is the result of widely accepted research presented by Thomas and Kilmann.

Thomas and Kilmann identified a conflict-handling grid comprised of five conflict management styles based on two dimensions: assertiveness and cooperativeness. Assertiveness is the motivation of an individual to achieve his/her own goals, objectives, and outcomes, while cooperativeness assesses the willingness to allow or help the other party to achieve its goals or outcomes. Any of the five conflict resolution styles might be appropriate based on the circumstances of the situation and the personalities of the individuals involved.

Of the five modes described in the matrix, only the strategy employing collaboration as a mode of conflict management breaks free of the win-lose paradigm. It has become almost habitual to fall back on the win-win alternative, but this was not the authors' original intention. They did not reject win-lose configurations out of hand. Instead, strategic considerations for managing conflict according to varied circumstances were identified. For instance, in a conflict centered on bids by two alternative suppliers, the best choice might well be a competing strategy with a winner and loser. After all, the objective in such a situation is to win the contract for one's own company. In most cases, winning the contract can be accomplished only at the expense of the competing supplier, who by definition becomes the loser.

In contrast, a competing approach almost never works well in the interpersonal conflict of people working in the same office (or even the same organization). Unlike the case of competing suppliers, coworkers—both the winner and the loser—must go on working together. Indeed, in many conflicts revolving around office politics, an accommodating strategy may actually enable individuals to strengthen their future negotiating position through allowing themselves to lose in conflicts over issues they do not feel particularly strongly about. In such situations, accommodating can be seen as a form of winning through losing. For instance, a manager may choose to concede an issue to an employee who is experiencing considerable stress as a means to motivate him or her. Similarly, an individual might choose an accommodating strategy to add balance to negotiations in which one's counterpart has already had to give up several other points. Indeed, a winner in a win-lose scenario who fails to put forth some effort to accommodate the other party may even provoke a backlash in the form of lack of commitment or open resistance.

Even the traditional approach of conflict avoidance has its place as an occasionally acceptable strategy. While conflict avoidance has justly been the subject of considerable condemnation, it can be rather useful in allowing both parties to cool off or in buying time until all the facts of a matter have been gathered. A manager might choose to avoid an employee in the throes of an emotional outburst, for example, until the employee has had sufficient time to calm down.

Finally, compromise is often a useful strategy when dealing with relatively small concerns. This differs from an accommodating strategy, in which the conceding party finds an issue unimportant that the opposing party considers comparatively important. A manager might enlist a compromise approach most effectively when both parties consider the issue to be of moderate or little importance. In such cases, compromising saves both parties the time required to employ problem-solving techniques to address the fundamental core of the conflict.

While all of these modes have their place among the strategies available to the manager, the collaborating approach to conflict management represents the most beneficial mode for most types of conflict management. In the collaborating mode, conflict itself acts as a managerial tool. The manager utilizes the conflict to guide the conflicting parties to address what essentially are obstacles faced by the organization. Through collaborative behavior, the conflicting parties pool their creative energies to find innovative answers to old problems.

It is in this key respect that the collaborative mode of conflict management differs from the other four conflict-handling modes. Accommodating, avoiding, competing, and compromising—as permutations of the win-lose scenario—are simply forms of conflict interventions. Collaboration as a conflict-handling mode, on the other hand, represents an attempt to channel conflict in a positive direction, thus enabling the manager to use conflict as a tool to resolve otherwise incompatible objectives within the organization. In other words, this method of handling conflict acts less as a conflict intervention and more as true conflict management.

However, any of the five conflict resolution styles may be appropriate and effective depending on the specific situation, the parties' personality styles, the desired outcomes, and the time available, The key to becoming more prepared is to understand the advantages and disadvantages of each method.

The attitude step tries to remove the foundation for pseudo-conflict. Stereotypical assumptions about different, culturally-based behaviors are uncovered. For example, a member of a high-context culture may misinterpret what a member of a low-context culture says as being needlessly blunt or even rude. Conversely, a member of a low-context culture may misinterpret what a person from a high-context culture says as being needlessly indirect or even outright deceptive. Such communication variations (as the works of Edward Hall have explained) have little to do with the actual intent or content of the messages, but represent instead culturally learned approaches to using implicit versus explicit communication styles. Similarly, in the attitude step, one acknowledges differences in the way that men and women are generally conditioned to communicate. Experts such as Borisoff and Merrill, for example, have delineated clearly differentiated communication styles between men and women, which are compounded by sex-trait stereotyping regarding issues of assertiveness, interruptive behavior, and perceptions of politeness. Finally, in the attitude step, one analyzes potentially problematic variations in styles of writing, speaking, and nonverbal mannerisms. Such differences may blur meanings. It is the role of the effective conflict participant to maintain an open mind toward all parties involved.

The action step begins to actively implement the chosen conflict-handling mode. If the selected mode is the problem-solving approach, the manager conveys the opportunity for a conflict resolution based on trust and ongoing feedback on those points on which the parties have already agreed. Simultaneously, each individual evaluates the behavior of the other parties (often, little more than subtle hints) to ascertain where potential trouble spots might arise. Also, each individual must remain aware of his or her own communication style and general behavior. Finally, all parties must stay alert to new issues that are raised and look for productive solutions.

In this last step participants decide on what they will do, and then summarize and review what they have agreed upon. Part of the analysis step is to ascertain whether every participant's requirements have been addressed (and met, if possible). Finally, the analysis step initiates the impetus for approaching conflict management as an ongoing process. Analysis enables participants to monitor both the short-term and long-term results of the conflict resolution.

Shelton and Darling suggest a new set of management skills, more appropriate for the ever-changing, conflict-ridden contemporary organization. They refer to these skills as the quantum skills. The suggested managerial skills are derived from the field of quantum physics. They are as follows:

This set of skills is grounded in a new science: worldview. These skills provide a whole-brained alternative for managing people and conflict.

Conflict management is an ongoing procedure. It entails continual communication and supervision. "Conflict-handling behavior is not a static procedure; rather it is a process that requires flexibility and constant evaluation to truly be productive and effective" (Borisoff and Victor 1998).

Revised by Patricia A. Lanier