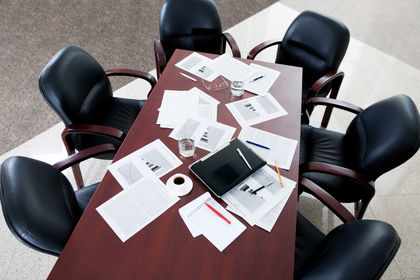 Corporate governance is the responsibility of a firm's board of directors. While management runs the company and oversees day-to-day operations, it is the board of directors that "governs" the corporations by overseeing management and representing the interests of the firm's shareholders.

By law, a corporation of any size must have a board of directors elected by its shareholders. The directors have a fiduciary duty to the shareholders, who are the corporation's owners, and directors as well as corporate officers can be held liable for failing to meet their fiduciary duties to stockholders. A passive board can get into trouble by relying on an influential CEO.

Investors and the public are particularly interested in the financial reports that publicly-traded companies release, and boards of directors of these companies have a legal obligation to ensure that these reports are fair and accurate. Recent business failures, auditor malfeasance, and material deficiencies in financial disclosures, however, have caused a serious erosion of public confidence in the financial reporting of these companies.

Consequently, Congress enacted the Sarbanes-Oxley Act of 2002. Common law has traditionally held that corporate directors have a primary fiduciary duty to the corporation and a secondary duty the shareholders. Sarbanes-Oxley has essentially made directors primarily responsible to the shareholders. The mandates of Sarbanes-Oxley are both complex and extensive. Stated simply, however, they basically require that members of corporate boards must avoid any financial, family, employee, or business relationships with the companies on whose boards they serve.

Further, Sarbanes-Oxley limits the ability of employees of the independent auditing firm from going to work for companies the auditor performs audit services for, and it requires five-year rotation period for audit partners on a given company's assignments. In other words, Sarbanes-Oxley clearly emphasizes independences and avoidance of conflict of interest.

Historically, corporate boards of directors have had a myriad of duties, most of them set by common law and the corporation's own by-laws. These duties often include: hiring, supervising, and sometimes firing the Chief Executive Officer; approving major strategic decisions; meeting with shareholders; establishing executive compensation; making decisions about mergers and acquisitions; assessing the viability of potential takeover bids; taking action if the corporation fails; overseeing financial reporting and audits; nominating board candidates; and refining board rules and policies.

One of the most difficult governance duties of the board of directors is the removal of the firm's CEO. This can occur when the board, representing the interests of the shareholders, disagrees with the strategic direction being pursued by the CEO, or if they merely want to show they are "doing their duty" as board members. For example, when Carly Fiorino was ousted as CEO of Hewlett-Packard (HP) in 2005, she was viewed by many to be hard-driving and fearless. The HP board of directors, however, had grown increasingly uncomfortable with her inability to deliver the profits that she promised she was going to deliver. Her refusal to relinquish some operating control, or to make any changes that the board requested, led to her downfall during a period of low profits and falling stock prices.

One measure of good governance is whether the company has a CEO who can maximize the company's performance. Whereas part of the governance function of the board of directors is to select the firm's CEO, another is to endorse the CEO's strategy—if it is the right one. For example, boards can support the CEO's strategic direction by endorsing proposed acquisitions. It can push the CEO to accomplish even more by encouraging him or her to think more broadly or by setting higher sales targets. The board can also support the CEO's leadership by making sure that the CEO is able to put together a strong management team to achieve those goals. In some cases the following CEO will be recruited from the management team built by the present CEO.

Another difficult time for boards occurs when the firm is the target of a takeover attempt. It is vitally important at such a time that the board have a clear sense of the value of the firm and that it is enabled to fully evaluate takeover offers. During a takeover it is the board's responsibility to accept or reject offers, and in so doing it must represent the shareholders' interests when negotiating the sale of the firm.

Boards often administer their governance responsibilities by establishing committees to oversee different areas of concern. Typical committees include audit, nominating, and compensation committees. This is largely in line with U.S. regulatory guidance. On August 16, 2002, the Securities and Exchange Commission (SEC) updated earlier proposals related to corporate governance that would recommend, but not mandate, that boards establish three oversight committees: a nominating committee, a compensation committee, and an audit committee. The SEC recommended that these oversight committees be composed entirely of independent directors.

Each committee oversees a specific area of corporate governance and reports to the full board. The nominating committee's area of oversight consists of issues related to management succession, including the CEO, and to the composition of the board of directors. The compensation committee oversees compensation of the firm's CEO and its officers, as well as director compensation. The audit committee is concerned with the company's financial condition, internal accounting controls, and issues relating to the firm's audit by an independent auditor.

In an article in the Pennsylvania CPA Journal, author John M. Fleming sets forth the primary responsibilities of the corporate audit committee: (1) Evaluating the processes in place to assess company risks and the effectiveness of internal controls, and assisting management in improving these processes where necessary; (2) monitoring the financial reporting process both internally and externally; and (3) monitoring and evaluating the performance of internal and external auditors.

Historically, corporate boards have been described as either active or passive. Some corporate CEOs relished having what they thought were "rubber stamp" boards of directors who would approve virtually any actions they chose to pursue. Sarbanes-Oxley has dramatically changed that dynamic. Corporate directors must now be much more independent, and their legal liability to shareholders has increased significantly.

One example in which a traditionally "quiet" board stepped up and became more active occurred with the Walt Disney Company. For years, Michael Eisner ruled the Disney empire with an allegedly brutal iron fist. After Roy E. Disney, Walt Disney's nephew, led a shareholder revolt of sorts and complained that investor votes were being ignored or circumvented, the Walt Disney Company board of directors finally decided to step in. In early 2004, the board took the chairmanship away from Eisner after more than 45 percent of votes cast at company's annual meeting opposed his board re-election. It was a resounding vote of no confidence. But the board then chose an Eisner ally, former U.S. Senator George Mitchell, as chairman, over the objections of several larger shareholders. Ironically, a year later, Eisner was easily re-elected to the board, with only 8.6 percent of voters withholding their support for him.

Boards can take simpler steps to ensure they are not passive without voting out the CEO. They can establish a non-executive chairman, a chairperson who is separate from the CEO. The board can also staff all board committees with independent outside directors, except the president and CEO.

THE ROLE OF INVESTOR ACTIVISM

Finding qualified people to serve on corporate boards of directors can be a challenging task. Corporate board members are learning in the current legal environment that serving on such board is can open them to a wide range of legal liability issues. The reforms of Sarbanes-Oxley and the SEC all seem well-intended, but will they make a difference for board members who get in over their heads or choose to look away?

Many critics argue that the proposed and enacted reforms do little to solve the real problems that exist with corporate boards. For example, one issue that has been repeatedly raised is the fact that corporate boards tend to only meet a couple of times a year. Yet it is further argued that more frequent meetings do little to solve the major problem, which is the fact that most corporate board members do not have enough access to information to fulfill their duties of stewardship to the shareholders.

Another issue that has been raised after continuous corporate failures revolves around the financial knowledge and competence of corporate board members. One proposed reform to remedy this problem has been to offer more generous pay for corporate board members, particularly those who serve on audit committees. The theory behind the increased pay is that it would help attract more chief financial officers and former chief executive officers from major accounting firms to serve on audit committees.

Proponents of such a move argue that former CFOs and CEOs are ideal audit committee members. But, there remains a limited pool of these professionals available to serve on audit committees. Furthermore, increased disclosure requirements are likely to raise liability for individual audit committee members, thus having a negative impact on their willingness to serve. Increased compensation may not persuade highly-qualified potential committee members to accept the burdensome legal responsibility of vouching for a multinational company's complex and intricate accounting system.

Finally, it is important to realize that having the best and most qualified corporate board of directors is no guarantee that financial reporting or other problems will not occur. Many of the corporate failures, large and small, that occur every year have arisen as a result of inattention, reckless disregard, or malfeasance. While some of the new and proposed regulations may address specific issues that have occurred in certain situations, they will never fully compensate for flaws in human nature. Many corporate failures would still have occurred under the new rules set by Congress and the SEC if board members found ways to ignore or circumvent them. As long as human judgment and discretion is permitted to operate within the corporate board function, there is room for error and wrongdoing.

Karmel, Roberta S. "Should a Duty to the Corporation Be Imposed on Institutional Shareholders?" The Business Lawyer 60 (November 2004): 1.