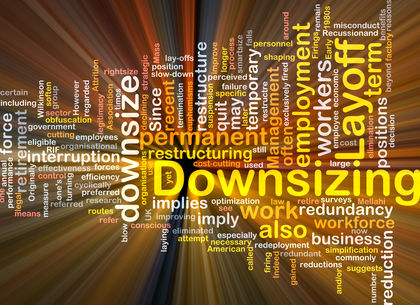 Divestment is a form of retrenchment strategy used by businesses when they downsize the scope of their business activities. Divestment usually involves eliminating a portion of a business. Firms may elect to sell, close, or spin-off a strategic business unit, major operating division, or product line. This move often is the final decision to eliminate unrelated, unprofitable, or unmanageable operations.

Divestment is commonly the consequence of a growth strategy. Much of the corporate downsizing of the 1990s has been the result of acquisitions and takeovers that were the rage in the 1970s and early 80s. Firms often acquired other businesses with operations in areas with which the acquiring firm had little experience. After trying for a number of years to integrate the new activities into the existing organization, many firms have elected to divest themselves of portions of the business in order to concentrate on those activities in which they had a competitive advantage.

In most cases it is not immediately obvious that a unit should be divested. Many times management will attempt to increase investment as a means of giving the unit an opportunity to turn its performance around. Portfolio models such as the Boston Consulting Group (BCG) Model or General Electric's Business Screen can be used to identify operations in need of divestment. For example, products or business operations identified as "dogs" in the BCG Model are prime candidates for divestment.

Decisions to divest may be made for a number of reasons:

Firms may divest when their market share is too small for them to be competitive or when the market is too small to provide the expected rates of return.

Firms may also decide to divest because they see better investment opportunities. Organizations have limited resources. They are often able to divert resources from a marginally profitable line of business to one where the same resources can be used to achieve a greater rate of return.

Firms sometimes reach a point where continuing to maintain an operation is going to require large investments in equipment, advertising, research and development, and so forth to remain viable. Rather than invest the monetary and management resources, firms may elect to divest that portion of the business.

A common reason for divesting is that the acquired business is not consistent with the image and strategies of the firm. This can be the result of acquiring a diversified business. It may also result from decisions to restructure and refocus the existing business.

Firms may pursue a divestment strategy by spinning off a portion of the business and allowing it to operate as an independent business entity. Firms may also divest by selling a portion of the business to another organization. RJR Nabisco used both of these forms of divestment. In 1985 Nabisco Brands was bought by R.J. Reynolds, the manufacturer of Winston, Camel, and many other cigarette brands. Fueled in part by fears of legal liability resulting from tobacco law-suits and by complaints from investors that the tobacco side of RJR Nabisco was dragging the food business down, in early 1999 the decision was made to spin-off the domestic tobacco operations into a separate company. Later in 1999 the decision was made to sell the overseas tobacco business to Japan Tobacco.

Another way to implement a divestment decision is to simply close a portion of the firm's operations. Faced with a decline in its market share of almost half in the 14 to 19 male age group and no introduction of a successful new product in years, and rising manufacturing costs, Levi Strauss has found it necessary to divest some of its operations. Since 1997 the company has announced plans to shut twenty-nine factories in North America and Europe and to eliminate 16,310 jobs. Selling many of the plants probably was not feasible as many other clothing manufacturers are also closing plants and moving operations overseas, depressing the price for clothing manufacturing facilities. Besides, the most likely buyers for the Levi's plants would be competitors and Levi Strauss probably would not want them to have the added capacity.

In 2004 Teleflex, a U.S. $2 billion industrial product manufacturer implemented a divestment and acquisition strategy to remove underperforming units while acquiring companies in markets where it intended to expand its business. Although a business may be identified as a target for divestment, the implementation of divestment is not always easy. First a buyer must be found. This may be difficult for a failing business unit. Once a buyer is found, then price must be negotiated. Many divestments are blocked by management's expectations for the operation. Firms may expect demand for the product to pick up. Management may also see the poor performance as a temporary setback that can be overcome with time and patience. Decisions to divest a business may be seen as an admission of failure on the part of management and may lead to escalating commitment to the struggling business as a way of protecting management's ego and public image. Robert Haas, president and CEO at Levi Strauss & Co., has certainly received bad publicity and has had his leadership abilities and judgment questioned as a result of his decision to close company plants and eliminate over 16,000 jobs.

Divestment is not usually the first choice of strategy for a business. However, as product demand changes and firms alter their strategies, there will almost always be some portion of the business that is not performing to management's expectations. Such an operation is a prime target for divestment and may well leave the company in a stronger competitive position if it is divested.