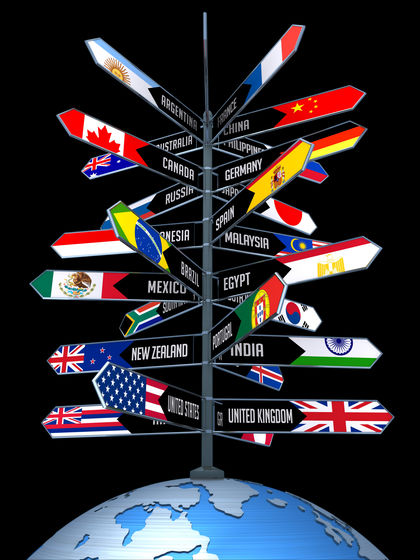 According to the Congressional Budget Office, since the end of World War II there has been significant support, especially from the United States, to eliminate artificial trade barriers and to support a greater liberalization of international trade. The General Agreement on Tariffs and Trade (GATT) was created shortly after World War II, between twenty-three countries, to facilitate and coordinate trade between the nations. In addition to creating a more liberal trade environment, it also had provisions and charters creating rules for employment, commodity agreements, restrictive business practices, international investments, and services. The process of creating a free trade agreement followed a pattern of discussion, negotiation, and eventual ratification. The full process was termed, "rounds." There were eight rounds in the GATT treaty. Despite numerous difficulties and differences between the involved countries, much was accomplished by GATT; although portions were never fully ratified by all of the countries.

In 1995, during the Uruguay round of GATT negotiations, the World Trade Organization (WTO) was created. The WTO became the official successor to the GATT. The WTO is the only international organization dealing with the global rules of trade between nations. Its main function is to ensure that trade flows as smoothly, predictably, and freely as possible. At the center of the WTO is its multilateral trading system that functions by seeking consensus between member nations (148 members). The notion of consensus facilitates cooperation and, potentially, an agreement that is most beneficial to all involved countries.

The expansion of free trade and the creation of trading blocs cause concern for some people. As reported by the Congressional Budget Office, the pursuit of free trade could "divert the world from multilateral negotiations and lead to the development of rival trading blocs." Other concerns include: the exploitation of developing countries by industrialized countries; environmental concerns as the production of goods overseas is not consistently regulated from country to country; and labor concerns over fair wages and the loss of jobs from industrialized countries to the developing countries, as well as political concerns that may influence the negotiations between trading partners.

Multilateral and free trade agreements create benefits by increasing imports and exports of goods. Countries are not the same in their production capabilities. Access to raw materials, necessary levels of technological development, and education of the workforce all have an impact on developing a product or service. Free trade agreements create the opportunity for countries to focus on what they do best, while being able to acquire goods and services at, potentially, the lowest price possible. By opening doors for other countries to compete fairly, without burdensome tariffs or trade policies, there is a belief that increased free trade is a deterrent to monopolistic activities.

The most recent round of negotiations for multilateral trade in the World Trade Organization continues to drag on due to the increasing number of participants with their own views and requirements. The attractiveness of free trade agreements will remain high. Countries interested in increasing trade will circumvent the delays in the WTO by making their own agreements. The expansion of current trade agreements is also taking place—as with the expansion of NAFTA into the Free Trade Agreement for the Americas (FTAA). The U.S. market is extremely desirable and lucrative for smaller countries' exports, while also providing access to a wider variety of goods and services from the U.S. and other potential trading partners.

Mahmood, Amir. "WTO and Market Access in Non-Agricultural Products: Issues and Options for Developing Countries." Journal of American Academy of Business, Cambridge 6, no. 1 (2005): 1–11.