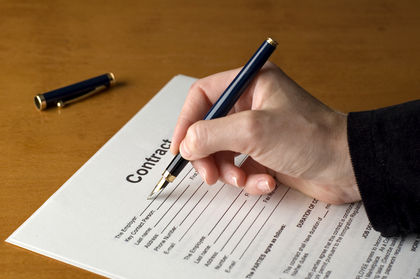 In an employment setting, a non-compete agreement is a contract between an employer and an employee, which prevents the employee from working for a competing company and from divulging to third parties, including new employers, the confidential business and proprietary information, trade secrets, customer lists, and technical and manufacturing processes of the contracting employer. A non-compete agreement must seek to protect a company's legitimate business interests and property. Without such an agreement, employees can leave a company, and subject to state protection against misappropriating a company's trade secrets and federal intellectual property statutes, freely compete with their former employers.

With some exceptions, most states recognize non-compete agreements or restrictive covenants in employment contracts, either through specific provision in a state statute or through the state courts' application of a common law "rule of reason" analysis. The "rule of reason" analysis weighs the company's interest in protecting its proprietary and confidential information in a geographic area for a period of time against the employee's need to have a way in which to earn a living. However, the specific provisions and types of non-compete agreements that the state will recognize varies among the states, and quite often, a non-compete agreement which is found valid in one state is determined by the courts in another state to be unenforceable because, for example, it is too broad in scope or time. Courts are generally not eager to enforce broadly such agreements because they may restrict an individual's ability to earn a living. Courts will also not enforce agreements that are merely broad-based attempts to prevent all competition. As a result, non-compete agreements must be drafted with care to conform with each state's requirements for a valid non-compete agreement. Non-compete agreements in and of themselves do not change the nature of the employment relationship. If it is an at-will relationship, either party can terminate it at any time, and the drafter of a non-compete agreement must be careful, in the attempt to restrict competition, that there is not instead a promise made that the employee will have a job with the employer for life.

Most importantly, the provisions of the non-compete agreement regarding the geographic territory which the agreement covers, the areas of competition which the agreement protects, and the length of the time of the period of non-competition must be restricted. No court will enforce a contract that attempts to prevent an employee from ever working again. Accordingly, a non-compete agreement should include in very specific terms the interests which the employer wishes to protect from competition, such as technology, research and development efforts, customer lists, pricing information, suppliers, prospective customers and projects, the company's strategic planning efforts, and other confidential and proprietary business information. Companies commonly refer to these interests as "trade secrets."

Courts are most willing to set aside non-compete agreements, or at least modify them, on the issues of the length of the period of non-competition, and the geographic area which it covers. The basis for the time and geographic restrictions is that they must be "reasonable." This determination differs from state to state, and within a state, from industry to industry. However, anyone attempting to enforce a non-compete agreement must be aware that the agreement will not be looked upon with favor if the amount of time it extends or the geographic area it covers is too broad, based on the type of business, the location of the customer base, and the job duties of the employee restrained by the non-compete agreement. Recent court rulings indicate that the following time periods are likely to be upheld: up to five years for agreements regarding trade secrets, up to three years for agreements regarding sale of a business, and up to six months for other types of agreements (e.g., use of client lists).

NON-COMPETE PROVISIONS IN
SHAREHOLDER/PARTNER, FUNDING,
OR SALE OF A BUSINESS AGREEMENTS

Agreements among shareholders of or partners in privately held companies often contain non-compete provisions. These protect each of the parties to the agreement from competitive activities of another that would damage the business, since each of the shareholders or partners has access to the company's trade secrets and confidential and proprietary information. Similarly, in agreements to provide funds to a business, particularly where the funding is provided by a venture capital source, there regularly appear noncompete provisions. The funding source includes these provisions because it wants to ensure the likelihood of the business's success by preventing competition by the owners or key managers of the business. In a sale of a business, the former owners are often restrained from setting up a new business, within some geographic area, which will compete with the business they just sold, for a specified period of time, again so that the business which was sold can have a chance to survive without competition from those who have information about the company's strengths and weaknesses. There is usually a separately negotiated payment for the non-compete provisions in a sale of a business agreement, and often the sold business will retain the former owners as consultants during the pendency of the non-compete period. Courts are more willing to enforce these types of non-compete agreements, as opposed to those in employment contracts, since the parties have received something of value-an ownership interest, proceeds of a sale, or funding-that is more than just continued employment.

Garrison, Michael J., and Charles D. Stevens. "Sign This Agreement Not to Compete or You're Fired! Noncompete Agreements and the Public Policy Exception to Employment at Will." Employee Responsibilities and Rights Journal 15, no. 3 (2003): 103–126.