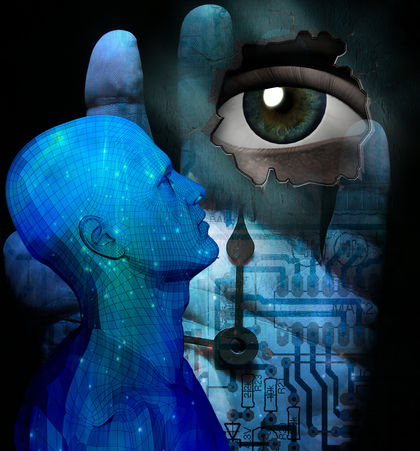 A system is commonly defined as a group of interacting units or elements that have a common purpose. The units or elements of a system can be cogs, wires, people, computers, and so on. Systems are generally classified as open systems and closed systems and they can take the form of mechanical, biological, or social systems. Open systems refer to systems that interact with other systems or the outside environment, whereas closed systems refer to systems having relatively little interaction with other systems or the outside environment. For example, living organisms are considered open systems because they take in substances from their environment such as food and air and return other substances to their environment. Humans, for example, inhale oxygen out of the environment and exhale carbon dioxide into the environment. Similarly, some organizations consume raw materials in the production of products and emit finished goods and pollution as a result. In contrast, a watch is an example of a closed system in that it is a relatively self-contained, self-maintaining unit that has little interacts or exchange with its environment.

All systems have boundaries, a fact that is immediately apparent in mechanical systems such as the watch, but much less apparent in social systems such as organizations. The boundaries of open systems, because they interact with other systems or environments, are more flexible than those of closed systems, which are rigid and largely impenetrable. A closed-system perspective views organizations as relatively independent of environmental influences. The closed-system approach conceives of the organization as a system of management, technology, personnel, equipment, and materials, but tends to exclude competitors, suppliers, distributors, and governmental regulators. This approach allows managers and organizational theorists to analyze problems by examining the internal structure of a business with little consideration of the external environment. The closed-system perspective basically views an organization much as a thermostat; limited environmental input outside of changes in temperature is required for effective operation. Once set, thermostats require little maintenance in their ongoing, self-reinforcing function. While the closed-system perspective was dominant through the 1960s, organization scholarship and research subsequently emphasized the role of the environment. Up through the 1960s, it was not that managers ignored the outside environment such as other organizations, markets, government regulations and the like, but that their strategies and other decision-making processes gave relatively little consideration to the impact these external forces might have on the internal operations of the organization.

As an open-systems approach spread among organizational theorists, managers began incorporating these views into practice. Two early pioneers in this effort, Daniel Katz and Robert Kahn, began viewing organizations as open social systems with specialized and interdependent subsystems and processes of communication, feedback, and management linking the subsystems. Katz and Kahn argued that the closed-system approach fails to take into account how organizations are reciprocally dependent on external environments. For example, environmental forces such as customers and competitors exert considerable influence on corporations, highlighting the essential relationship between an organization and its environment as well as the importance of maintaining external inputs to achieve a stable organization.

Furthermore, the open-system approach serves as a model of business activity; that is, business as a process of transforming inputs to outputs while realizing that inputs are taken from the external environment and outputs are placed into this same environment. Companies use inputs such as labor, funds, equipment, and materials to produce goods or to provide services and they design their subsystems to attain these goals. These subsystems are thus analogous to cells in the body, the organization itself is analogous to the body, and external market and regulatory conditions are analogous to environmental factors such as the quality of housing, drinking water, air and availability of nourishment.

The production subsystem, for example, focuses on converting inputs into marketable outputs and often constitutes a primary purpose of a company. The boundary subsystem's goal is to obtain inputs or resources, such as employees, materials, equipment, and so forth, from the environment outside of the company, which are necessary for the production subsystem. This subsystem also is responsible for providing an organization with information about the environment. This adaptive subsystem collects and processes information about a company's operations with the goal of aiding the company's adaptation to external conditions in its environment. Another subsystem, management, supervises and coordinates the other subsystems to ensure that each subsystem functions efficiently. The management subsystem must resolve conflicts, solve problems, allocate resources, and so on.

Managers must take into consideration their organization's position along the open-closed continuum. The Linux computer operating system, for instance, is "open-source" and Red Hat, Inc., the corporation selling the bundled revisions-the multiple inputs from geographically dispersed users-represents an organization that would cease to exist if it were not for an open-systems perspective. Thus, stable environments with low complexity are more consistent with a relatively closed-system or mechanistic management style, while rapidly-changing environments are more consistent with flexible, decentralized, or "organic" management styles.

Thanks for categorically explaining about the open system with your cler examples.However could you also elucidate with example the closed system?Here the examples that you gave basically relate to electronics such as watches and thermos.Could you kindly relate it to comapanies that you deemed 'closed'?
Thank you.
2
Nicholas

Thanks for explaining about the open system with your clear examples.can you also do the same for the closed systems.thanks in advance