SAFETY IN THE WORKPLACE 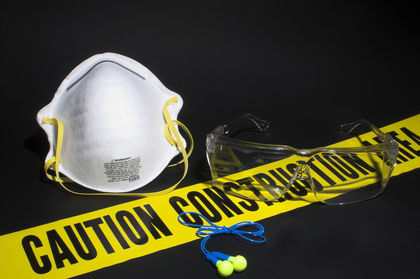 One of the biggest issues facing employers today is the safety of their employees. Workplace accidents are increasingly common. In 2003, for instance, the Bureau of Labor Statistics (BLS) reported a total of 4.4 million nonfatal workplace injuries in private industries. Organizations have a moral responsibility to ensure the safety and well-being of their members. Organizational practices that promote safety can also help a company establish competitive advantage by reducing costs and complying with safety laws.

State and federal governments strictly regulate organizational safety practices. The government views safety violations very seriously, and the penalties for violating safety laws can be quite severe. In addition to being issued large fines, employers who violate safety regulations can be held liable for criminal charges. The following examples illustrate the types of penalties associated with such violations:

GOVERNMENT REGULATION OF SAFETY
PRACTICES AT THE WORKPLACE

Federal laws regulate the safety practices of most organizations. We limit our discussion to laws that affect a majority of organizations, but note that several additional laws exist which cover particular segments of the workforce. For instance, numerous laws pertain to government contractors, to specific states, and to specific industries (e.g., transportation, nuclear power, food, and drug).

The Occupational Safety and Health Act of 1970 is probably the most comprehensive and wide-ranging legislation in this area. It applies to nearly all U.S. workplaces. The act aims to ensure safe working conditions for every American worker by:

Three separate agencies were created by the act:

To comply with these standards, most mid- to large-sized organizations employ safety professionals to keep up with them and ensure that each is being met. These professionals face too many specific issues to mention here, but some of the most important issues they must address appear in Figure 1.

OSHA conducts inspections based on the following priority classifications, which are listed in order of importance:

When an OSHA inspection reveals that an employer has violated one of its standards, it issues a citation. The citation, posted near the site of the violation, lists the nature of the violation, the abatement period (i.e., the time frame within which the company must rectify the problem), and any penalty levied against the employer. Willful violations (i.e., those that an employer intentionally and knowingly commits) carry a penalty of up to $70,000 for each offense. If a death occurs because of a willful violation, the employer may be both fined and imprisoned.

Congress enacted the Hazard Communication Standard (more commonly referred to as the Employee Right-to-Know Law) in 1984. This law gives workers the right to know what hazardous substances they are dealing with on the job. A substance is considered hazardous if exposure to it can lead to acute or chronic health problems. Federal and state agencies have compiled lists of more than 1,000 substances deemed hazardous under this law. The law requires all organizations to (1) develop a system for inventorying hazardous substances, (2) label the containers of these substances, and (3) provide employees with needed information and training to handle and store these substances safely.

Employers typically violate the OSHA Hazard Communication Standard more frequently than any other OSHA standard. The majority of companies are cited for failing to have:

Another law affecting organizational safety and health practices is the Americans with Disabilities Act (ADA). An individual is protected by the ADA if he or she is disabled, that is, if the individual has a physical or mental impairment that substantially limits one or more of the individual's major life activities. According to the ADA regulations, temporary, non-chronic impairments that are short in duration and have little or no long-term impact are usually not considered disabilities under the act. For example, broken limbs, sprains, concussions, appendicitis, or influenza are not disabilities. However, if a broken leg did not heal properly and resulted in permanent impairment that significantly restricted walking or other major life activities, it could then be considered a disability.

In 2004, there were 15,376 total charges filed as ADA violations with the Equal Employment Opportunity Commission (EEOC). From July 1992 (when the law first took effect) through the end of September 2004, employees filed 204,997 complaints with the EEOC. Employees who became disabled as the result of workplace conditions or injuries filed about half of these charges. Individuals with back impairments have lodged the greatest number of charges. People also frequently claimed emotional, neurological, and extremity impairments.

Penalties for ADA violations may be as high as $50,000 for initial violations and up to $100,000 for each subsequent violation. In addition, the Civil Rights Act of 1991 allows claimants to collect up to $300,000 in punitive damages for "willful" violations.

Despite laws designed to ensure safety at the workplace, U.S. companies' accident rates are alarmingly high. According to one estimate, employees lost eighty million workdays in 2002 from workplace injuries, and more than 3.7 million people suffered disabling injuries on the job that year.

What causes all of these industrial injuries? These causes can be divided into three categories: employee error, equipment insufficiency, and procedure insufficiency. Examples of causes falling within each category are listed here:

Workplace accidents pose serious problems for employees and for a firm's competitive advantage, but employers can prevent most of them. Many preventive strategies work.

Some people just seem to be accident prone. If some people do have inherent tendencies toward accidents, then organizations should be able to lower their accident rates by screening out accident-prone applicants. Research studies have discovered that individuals with certain personality characteristics are more likely than others to be involved in industrial accidents. For instance, one study found that people with higher accident rates tend to be impulsive and rebellious, and they tend to blame outside forces, rather than themselves, for their mishaps. Another study identified the following four "high-risk" personality characteristics:

Many organizations now use personality tests to screen out individuals with accident-prone tendencies. For example, some companies use a test (called the Personnel Selection Inventory-Form 3S) to assess applicants' safety consciousness. One part of the test measures the degree to which individuals perceive a connection between their own behavior and its consequences. As noted earlier, individuals unable to see this connection are at greater risk for accidents.

Employers who provide all new employees with training on safe and proper job procedures experience fewer accidents. Employees should learn how to perform each of their tasks as safely as possible. Training should be very specific, as illustrated in the example that follows. This example covers the procedures to be followed by employees working at a large food manufacturing plant:

While safety training is essential, employees do not always apply what they have learned. Just as many automobile drivers know it is wrong to exceed legal speed limits, but do it anyway, workers may choose to ignore instructions and carry out procedures in their own, unsafe way. One way to mitigate this problem is to implement a safety incentive program. Such programs aim to motivate safe behavior by providing workers with incentives for avoiding accidents. The organization formulates safety goals (usually on a department-wide basis) and rewards employees if these goals are met. For example, a particular department may establish the goal of reducing lost-time accidents by 50 percent over the next three months. If this goal were to be met, all employees within that department would receive an incentive reward, usually in the form of a cash bonus or merchandise.

Safety incentive programs often work quite well. For example, Willamette Industries implemented a program because it was experiencing an average of thirty accidents per year that caused people to miss work. As a result of the program, the company went 450 days without a lost-time accident.

Two problems often arise with safety incentive programs, however. In some cases, workers get so caught up in trying to win incentive rewards that they conceal their injuries and do not report them. When injuries go unreported, injured workers relinquish their rights to workers' compensation and firms remain unaware of safety problems. Second, workers may continue to perform in an unsafe manner (e.g., take risky shortcuts) because they remain unconvinced that such behavior is likely to result in accidents. Unfortunately, these employees are grievously mistaken; unsafe behaviors are a leading cause of accidents. According to one estimate, for every 100,000 unsafe behaviors there are 10,000 near-miss accidents, 1,000 recordable accidents, 100 lost-time accidents, and 1 fatality.

Because employees who "know better" often continue to engage in accident-causing behavior, many employers have redirected their focus from accident prevention to the prevention of unsafe acts that could lead to an accident. To do so, firms conduct safety audits. A safety committee or supervisors who observe employees on the job and correct unsafe behaviors generally conduct such audits.

Each employee should be monitored according to a planned schedule, generally on a weekly basis, as follows:

Stop in the work area for a few moments and observe worker's activities, looking for both safe and unsafe practices. Use the following guide:

These discussions should help employees recognize and correct their unsafe acts. When engaging in them, adhere to the following advice:

Findings should be recorded in writing. Pursue any item discussed during the audit that requires follow-up.

Accident investigations should be performed in the following manner. When an accident occurs, the investigator's first responsibility is to ensure the safety of all employees by:

You should then begin an investigation to identify both the immediate and underlying causes of the accident. The immediate cause is the event that directly led to the accident, such as a slippery floor, failure to wear safety gear, or failure to follow proper procedures.

Immediate causes, while easily found, are not always very helpful in suggesting how future incidents of this nature can be avoided. To accomplish this aim, the investigator must discover the underlying cause of the accident. For example, suppose a worker slips and falls on spilled oil. The oil on the floor is the immediate cause of the accident, but you need to know why it was not cleaned up and why a machine was leaking oil in the first place. Poor training, lack of rule enforcement, low safety awareness, poor maintenance, or crowded work areas commonly underlie accidents.

The investigator should ensure the accident scene is kept intact until the investigation is finished, as this will be the only chance to view the scene exactly as it was at the time of the accident. If a camera is available, photographs of the scene should be taken. Nothing related to the incident should be destroyed or discarded. The investigator should inspect the location (e.g., check for chemicals, broken pieces of machinery) and interview injured or affected workers, eyewitnesses, and anyone else who may be familiar with the accident area. Interviews should be conducted immediately, while the incident is still fresh in everyone's mind. Individuals should give their own account of the incident; by letting them tell their stories without interruption, the investigator can determine if the various responses corroborate one another. Continue asking why until the underlying causes surface. Once the causes are identified, the investigator should recommend any changes indicated by the findings.

Safety in the workplace works most effectively with a combination of employer attentiveness and employee responsibility. Costs, both financial and physical, can be decreased and injuries reduced with proper training, employer involvement and company-wide adherence to OSHA rules and guidelines. Ensuring safety is important for not only each individual company and worksite, but for industries and national concerns as well.

can we create awareness of safety by using celebration of National safety week and World environment day and Occupational Health day. Please reply,