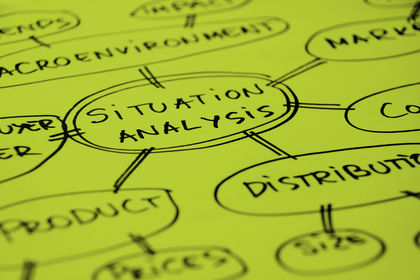 The definition of task analysis varies depending on the purpose for it and the context in which it is performed. Similarly, purposes for conducting task analyses vary, from using the process as an aid in designing job descriptions to using it to develop effective tools for human-computer interaction (e.g., analyzing user needs and behaviors to develop software). David H. Jonassen et al describe five general classes of task analysis: job or performance analysis, learning analysis, cognitive task analysis, content or subject-matter analysis, and activity-based methods, which is a relatively new category of the task-analysis discipline. Each approach requires different methods. In many cases, however, task analysis can most simply be described as the division of activity into its specific component levels in order to determine the value in solving particular performance problems.

Task analysis is a way of assessing what people, machines, or a combination thereof do and why they do it. Analyses examine how and where specific information flows, how it is modified at various stages (what is done to the information), who performs those modifications (a computer or person), and whether he, she, or it is the appropriate vehicle for efficient and effective completion of those tasks.

Task analysis is also studied in relation to group support systems (GSS). This type of analysis does not focus on the study of all tasks, but on those tasks typically encountered in organizational decision-making groups. Often such analysis is conducted in an effort to discern how the introduction of new elements, such as technology, can facilitate more effective group functioning and decision making.

Some workplaces emphasize tasks so heavily that they can be considered task environments, or may operate under task management. A task environment views tasks as behavior requirements. Required behaviors vary with the task(s) to be performed, and those tasks influence behavior in that each task is characterized by its purpose, that is, what group members must do to accomplish a certain task (e.g., creative tasks require that a group generates ideas). Behavior determination for each task includes deciding what needs to be accomplished and how each goal should be met. Leaders in these organizations focus on managing the work that needs to be performed, and they expect employees to fall in line behind them in order to meet the prescribed goals. More specifically, the leaders manage procedures for coordinating the sequence of procedures and materials for the completion of specific tasks. These types of situations provide much fodder for research into group support systems and organizational behavior.

Task analysis has been studied almost since the Industrial Revolution, during which employers began to focus on breaking down jobs into the specific tasks required. One of the first true leaders of task analysis was Frederick Winslow Taylor, the author of The Principles of Scientific Management , first published in 1911. Taylor applied critical thinking to industry, seeking the most efficient way to perform tasks and/or jobs and rewarding workers who found ways to facilitate working toward that goal.

Taylor's theories were a precursor to Jonassen's first classification of task analysis: job or performance analysis. Originally meant to describe the simple behaviors performed on the job, analysis of this sort also became used as a way to plan technical training. During the 1950s and 1960s subject-matter analysis began to be used to plan curricula in educational facilities. This involved analyzing content into its most basic constructs and determining how they relate to other subject matter. The 1960s led to another revolution in learning psychology, and thus, to another form of analysis: learning analysis. This movement focused on people who learned processed information as they performed certain tasks. Cognitive task analysis evolved from this class, as did research in human-computer interaction. Finally, activity analysis studies how people perform in natural surroundings and which social and contextual factors affect that performance.

Task analysis was studied in organizational literature and as part of the group process in the mid- to late-1960s. Scholars of group behavior felt that tasks undertaken as part of the group process played particularly important roles in how group members interacted and performed. Group support systems (GSS) literature also emphasized the importance of tasks and, from the mid-1980s to the mid-1990s, developed a task classification scheme that has since been widely used. In the late 1990s theories were explored as to how tasks and technology worked together within GSS. The theory asserts that clear descriptions of tasks are an important part of any GSS environment, and that technology is linked specifically to the demands of the tasks to be performed.

The use of task analysis across various market segments is growing. Computer-supported cooperative work (CSCW) and GSS continue to increase in importance with the need to support interdisciplinary collaboration, telecommuting, and cultural challenges in the global workplace. The use of task analysis is making its way into the military as well. As described in an article by Pezzano and Burke in Defense AT&L , the U.S. Army used task analysis to identify requirements, increase flexibility, and reduce risk in maturing technological systems.

In the fields of occupational and organizational psychology, cognitive task analysis is being used in two ways. In the healthcare field, occupational therapists work to identify how people approach everyday tasks in order to better help patients learn to perform tasks. On a more organizational level, researchers examine the cognitive activity behind complex task performance to better train workers and design or improve manufacturing systems. The goal in these studies is to reduce error and mitigate risk in work settings. This is also referred to as "process tracing." While no dominant methodology has evolved yet for this emerging trend, models are being developed and proposed as the popularity of the technique continues to grow.

Specific elements included on data-flow diagrams (DFDs) include outside units such as customer needs, inside units such as the employees who actually manipulate data, and whether a data element inputs to an element or reads from an element. Data storage areas are also indicated on DFDs. Data-flow diagrams can be designed to illustrate existing processes as well as to document better and even ideal situations. Each type of element is denoted within a prescribed symbol (e.g., rectangles signify outside units) so that a simple glance at the chart is enough to differentiate each element.

DFDs are helpful in that they show exactly how data flow is initiated and by whom, who or which system receives the data, and what they do to the data. Diagrams can also be annotated to show the volume and frequency with which these changes occur. However, data-flow diagrams do not show specific processing details, nor are they a helpful representation of how the process fits onto a timeline.

Activity-flow diagrams (AFDs) keep track of the people or systems that use data or information, and the time sequence in which that occurs. Activity-flow diagrams are similar to flow charts, with a special language and symbols specific to their purpose. They also note any activities that involve the transformation of data or materials.

Activities included on AFDs include the following:

The purpose of AFDs is to look for efficiencies and prescribe support in the most appropriate and effective way possible where it is lacking. Support may be required in a human capacity, or technological systems may be available to automate or support some activities. Processes are allocated to computers and/or personnel according to what each does best and what best suits the needs of the specific processes. Various options are analyzed using cost/benefit analysis, but tend to follow some general conditions: