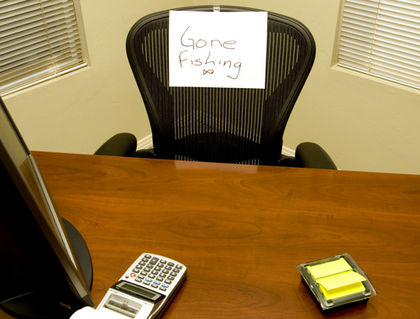 Absenteeism is the term generally used to refer to unscheduled employee absences from the workplace. Many causes of absenteeism are legitimate—personal illness or family issues, for example—but absenteeism also can often be traced to other factors such as a poor work environment or workers who are not committed to their jobs. If such absences become excessive, they can have a seriously adverse impact on a business's operations and, ultimately, its profitability.

"Unscheduled absences hurt," wrote M. Michael Markowich in a summary of an article he wrote for the September 1993 issue of Small Business Reports. "Most sick leave policies foster a 'use it or lose it' mind-set, and employees feel entitled to a certain number of sick days." Markowich went on to note that a survey of 5,000 companies conducted by Commerce Clearing House Inc. (CCH Inc.) found that unscheduled absences cost small businesses, at that time, $62,636 a year, on average, in lost productivity, sick time, and replacement costs.

Indeed, absenteeism can take a financial toll on a small business (or a multinational company, for that matter) in several different respects. The most obvious cost is in the area of sick leave benefits—provided that the business offers such benefits—but there are significant hidden costs as well. The SOHO Guidebook cites the following as notable hidden cost factors associated with absenteeism:

Many small business owners do not establish absenteeism policies for their companies. Some owners have only a few employees, and do not feel that it is worth the trouble. Others operate businesses in which "sick pay" is not provided to employees. Workers in such firms thus have a significant incentive to show up for work; if they do not, their paycheck suffers. And others simply feel that absenteeism is not a significant problem, so they see no need to institute new policies or make any changes to the few existing rules that might already be in place.

But many small business consultants counsel entrepreneurs and business owners to consider establishing formal written policies that mesh with state and federal laws. Written policies can give employers added legal protection from employees who have been fired or disciplined for excessive absenteeism, provided that those policies explicitly state the allowable number of absences, the consequences of excessive absenteeism, and other relevant aspects of the policy. Moreover, noted The SOHO Guidebook, "a formal, detailed policy that addresses absences, tardiness, failure to call in, and leaving early can serve to prevent misconceptions about acceptable behavior, inconsistent discipline, complaints of favoritism, morale problems, and charges of illegal discrimination. General statements that excessive absenteeism will be a cause for discipline may be insufficient and may lead to problems."

Other steps that have been touted as effective in reducing absenteeism concern making changes in company culture and policy. CCH Incorporated, for instance, has noted that workplace flexibility can dramatically cut incidents of unscheduled absenteeism. Many small businesses that have introduced flextime, compressed work weeks, job sharing, and telecommuting options to their workforce have seen absenteeism fall significantly, for these policies provide employees with much greater leeway to strike a balance between office and home that works for them (and the employer).

Most employees are conscientious workers with good attendance records (or even if they are forced to miss significant amounts of work, the reasons are legitimate). But as Markowich noted, "every company has a small number of abusers—about 3 percent of the workforce—who exploit the system by taking more than their allotted sick time or more days than they actually need. And when they begin calling in sick on too many Monday or Friday mornings, who picks up the slack and handles the extra work? More important, who responds to customer requests?"

To address absenteeism, then, many small businesses that employ workers have established one of two absenteeism policies. The first of these is a traditional absenteeism policy that distinguishes between excused and unexcused absences. Under such policies, employees are provided with a set number of sick days (also sometimes called "personal" days in recognition that employees occasionally need to take time off to attend to personal/family matters) and a set number of vacation days. Workers who are absent from work after exhausting their sick days are required to use vacation days under this system. Absences that take place after both sick and vacation days have been exhausted are subject to disciplinary action. The second policy alternative, commonly known as a "no-fault" system, permits each employee a specified number of absences (either days or "occurrences," in which multiple days of continuous absence are counted as a single occurrence) annually and does not consider the reason for the employee's absence. As with traditional absence policies, once the employee's days have been used up, he or she is subject to disciplinary action.

"USE IT OR LOSE IT" Some companies do not allow employees to carry sick days over from year to year. The benefits and disadvantages of this policy continue to be debated in businesses across the country. Some analysts contend that most employees do not require large numbers of sick days, and that systems that allow carryovers are more likely to be abused by poor employees than appropriately utilized by good employees, who, if struck down by a long-term illness, often have disability alternatives. But Markowich warns that "today, most employees feel entitled to a specified number of sick days. And if they don't take those days, they feel that they are losing a promised benefit. Your company may be inadvertently reinforcing this 'use it or lose it' attitude by establishing policies under which employees 'lose' their sick time if it is not used by the end of the year."

ESTABLISHING A SYSTEM FOR TRACKING ABSENCES

Absenteeism policies are useless if the business does not also implement and maintain an effective system for tracking employee attendance. Some companies are able to track absenteeism through existing payroll systems, but for those who do not have this option, they need to make certain that they put together a system that can: 1) keep an accurate count of individual employee absences; 2) tabulate company wide absenteeism totals; 3) calculate the financial impact that these absences have on the business; 4) detect periods when absences are particularly high; and 5) differentiate between various types of absences.

Allerton, Haidee E. "How To." Training and Development, August 2000.