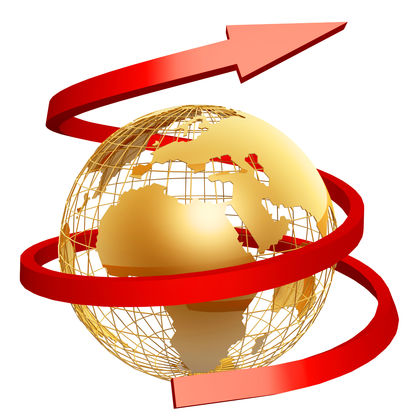 A business cycle is a sequence of economic activity in a nation's economy that is typically characterized by four phases—recession, recovery, growth, and decline—that repeat themselves over time. Economists note, however, that complete business cycles vary in length. The duration of business cycles can be anywhere from about two to twelve years, with most cycles averaging about six years in length. In addition, some business analysts have appropriated the business cycle model and terminology to study and explain fluctuations in business inventory and other individual elements of corporate operations. But the term "business cycle" is still primarily associated with larger (regional, national, or industrywide) business trends.

STAGES OF A BUSINESS CYCLE

RECESSION A recession—also sometimes referred to as a trough—is a period of reduced economic activity in which levels of buying, selling, production, and employment typically diminish. This is the most unwelcome stage of the business cycle for business owners and consumers alike. A particularly severe recession is known as a depression.

RECOVERY Also known as an upturn, the recovery stage of the business cycle is the point at which the economy "troughs" out and starts working its way up to better financial footing.

GROWTH Economic growth is in essence a period of sustained expansion. Hallmarks of this part of the business cycle include increased consumer confidence, which translates into higher levels of business activity. Because the economy tends to operate at or near full capacity during periods of prosperity, growth periods are also generally accompanied by inflationary pressures.

DECLINE Also referred to as a contraction or downturn, a decline basically marks the end of the period of growth in the business cycle. Declines are characterized by decreased levels of consumer purchases (especially of durable goods) and, subsequently, reduced production by businesses.

For centuries, economists in both the United States and Europe regarded economic downturns as "diseases" that had to be treated; it followed, then, that economies characterized by growth and affluence were regarded as "healthy" economies. By the end of the 19th century, however, many economists had begun to recognize that economies were cyclical by their very nature, and studies increasingly turned to determining which factors were primarily responsible for shaping the direction and disposition of national, regional, and industry-specific economies. Today, economists, corporate executives, and business owners cite several factors as particularly important in shaping the complexion of business environments.

MOMENTUM Many economists cite a certain "follow-the-leader" mentality in consumer spending. In situations where consumer confidence is high and people adopt more free-spending habits, other customers are deemed to be more likely to increase their spending as well. Conversely, downturns in spending tend to be imitated as well.

Many economists have hypothesized that business cycles are the result of the politically motivated use of macroeconomic policies (monetary and fiscal policies) that are designed to serve the interest of politicians running for re-election. The theory of political business cycles is predicated on the belief that elected officials (the president, members of congress, governors, etc.) have a tendency to engineer expansionary macroeconomic policies in order to aid their re-election efforts.

MONETARY POLICIES Variations in the nation's monetary policies, independent of changes induced by political pressures, are an important influence in business cycles as well. Use of fiscal policy—increased government spending and/or tax cuts—is the most common way of boosting aggregate demand, causing an economic expansion. Moreover, the decisions of the Federal Reserve, which controls interest rates, can have a dramatic impact on consumer and investor confidence as well.

FLUCTUATIONS IN EXPORTS AND IMPORTS The difference between exports and imports is the net foreign demand for goods and services, also called net exports. Because net exports are a component of the aggregate demand in the economy, variations in exports and imports can lead to business fluctuations as well. There are many reasons for variations in exports and imports over time. Growth in the gross domestic product of an economy is the most important determinant of its demand for imported goods—as people's incomes grow, their appetite for additional goods and services, including goods produced abroad, increases. The opposite holds when foreign economies are growing—growth in incomes in foreign countries also leads to an increased demand for imported goods by the residents of these countries. This, in turn, causes U.S. exports to grow. Currency exchange rates can also have a dramatic impact on international trade—and hence, domestic business cycles—as well.

Small business owners can take several steps to help ensure that their establishments weather business cycles with a minimum of uncertainty and damage. "The concept of cycle management may be relatively new," wrote Matthew Gallagher in Chemical Marketing Reporter, "but it already has many adherents who agree that strategies that work at the bottom of a cycle need to be adopted as much as ones that work at the top of a cycle. While there will be no definitive formula for every company, the approaches generally stress a long-term view which focuses on a firm's key strengths and encourages it to plan with greater discretion at all times. Essentially, businesses are operating toward operating on a more even keel."

Specific tips for managing business cycle downturns include the following:

Hendrix, Craig, and Jan Amonette. "It's Time to Determine Your E-Business Cycle." Indianapolis Business Journal. May 8, 2000.

Walsh, Max. "Goldilocks and the Business Cycle." The Bulletin with Newsweek. December 7, 1999.

Wilson, Robert A. "Where Were You When the Cycle Died?" Pulp and Paper. February 1997.