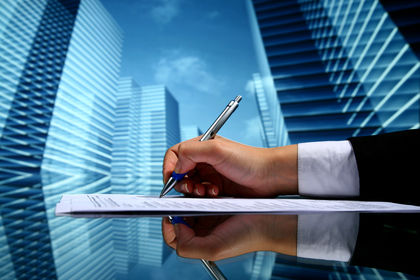 Because the corporation is a separate entity, it is also viewed as an individual taxpayer by the Internal Revenue Service. As a result, corporations are subject to double taxation, which means that the profits are taxed once on the corporate level and a second time when they are distributed as dividends to the shareholders. (If a business is eligible, it may elect S corporation status to avoid this negative characteristic of C corporations.)

LIMITED LIABILITY Most small businesses that consider incorporating do so for the limited liability that corporate status affords. The greatest fear of the sole proprietor or partner—that their life's savings could be jeopardized by a law suit against their business or by sudden overwhelming debts—disappears once the business becomes a corporation. Although the shareholders are liable up to the amount they have invested in the corporation, their personal assets cannot be touched. Rather than purchase expensive liability insurance, then, many small business owners choose to incorporate to protect themselves.

RAISING CAPITAL It can be much easier for a corporation to raise capital than it is for a partnership or sole proprietorship, because the corporation has stocks to sell. Investors can be lured with the prospect of dividends if the corporation makes a profit, avoiding the necessity of taking out loans and paying high interest rates in order to secure capital.

Corporations may find it easier to attract the best employees, who may be lured by stock options and fringe benefits.

FRINGE BENEFITS One advantage C corporations have over unincorporated businesses and S corporations is that they may deduct fringe benefits (such as group term life insurance, health and disability insurance, death benefits payments to $5,000, and employee medical expenses not paid by insurance) from their taxes as a business expense. In addition, shareholder-employees are also exempt from paying taxes on the fringe benefits they receive. To be eligible for this tax break, though, the corporation must not design a plan that benefits only the shareholders/owners. A good portion of the employees (usually 70 percent) must also be able to take advantage of the benefits. For many small businesses, the expense of providing fringe benefits for all employees is too expensive, so the tax break may not be considered an advantage.

CONTINUANCE OF EXISTENCE Transfer of stock or death of an owner does not alter the corporation, which exists perpetually, regardless of owners, until it is dissolved. While this is usually considered an advantage, Fred Steingold argues in The Legal Guide for Starting and Running a Small Business that, in reality, "You don't need to incorporate to ensure that your business will continue after your death. A sole proprietor can use a living trust or will to transfer the business to heirs. Partners frequently have insurance-funded buy-sell agreements that allow the remaining partners to continue the business."

DOUBLE TAXATION After they deduct all business expenses, such as salaries, fringe benefits, and interest payments, C corporations pay a tax on their profits at the corporate level. If any of those profits are then distributed as dividends to the shareholders, those individuals must also pay a tax on the money when they file their personal tax returns. For companies that expect to reinvest much of the profits back into the business, double taxation may not affect them enough to be a serious drawback. In the case of the small business, most if not all of the company's profits are used to pay salaries and fringe benefits, which are deductible, and double taxation may be avoided because no money is left over for distributing dividends

BUREAUCRACY AND EXPENSE Corporations are governed by state and federal statutes, which means that they have to abide by sometimes intricate corporate laws. Therefore, lawyers and tax preparers will need to be hired, and regular stockholder and board of directors meetings will have to be held, and detailed minutes of those meetings must be taken. All of the corporation's actions must be approved by the directors, who can limit the ability of the corporation to take quick action on pressing matters. Corporations have to pay fees, which vary by state, when they file the articles of incorporation. And in order to bring up a case in small claims court, the corporation is required to be represented by a lawyer, whereas sole proprietors or partners can represent themselves. In addition, if the corporation does interstate business, it is subject to taxes in other states.

RULES GOVERNING DIVIDEND DISTRIBUTION A corporation's profits are divided on the basis of stockholdings, whereas a partnership may divide its profits on the basis of capital investment or employment in the firm. In other words, if a stockholder owns 10 percent of the corporation's stock, she may only receive 10 percent of the profits. However, if that same person was a partner in an unincorporated firm to which she had contributed 10 percent of the company's capital, she might be eligible to receive more than 10 percent of the business's profits if such an agreement had been made with the other partners. Strict rules, though, govern the way corporations divide their profits, even to the point, in some states, of determining how much can be distributed in dividends. Usually, all past operations must be paid for before a dividend can be declared by the corporation's directors. If this is not done, and the corporation's financial stability is put in jeopardy by the payment of dividends, the directors can, in most states, be held personally liable to creditors.

STRUCTURE OF A CORPORATION

In small businesses, the owners often hold more than one or all of the following positions, which are required of all corporations:

Financing the operations of a corporation may involve selling stock (equity financing), taking out loans (debt financing), or reinvesting profits for growth.

EQUITY This is cash, property, or services exchanged for stock in the company. Generally, each stock is equivalent to one dollar of investment. If the small business owner is planning to exchange property to the corporation for stock, then a tax advisor should be consulted; if the property has appreciated, taxes may be due on the exchange.

DEBT This is money lent by banks or shareholders. In the former case, a personal guarantee by the corporation's principals is usually required, which makes an exception to the limited liability rule. The owner of a corporation who personally guarantees a loan is also personally responsible for paying it back if the corporation goes under. Many corporations have preferred to fund the corporation with shareholder money in exchange for promissory notes because unlike dividends, the repayment of debts is not taxable. The Internal Revenue Service monitors such debt closely, though, to make sure it is not excessive and that adequate interest is paid.

After the C corporation deducts all business expenses, such as salaries, fringe benefits, and interest payments, it pays a tax on its profits at the corporate level. Then dividends may be distributed to the shareholders, who must pay a tax on the money when they file their personal tax returns. In the case of the small business, though, double taxation may not be a consideration, because most, if not all of the company's profits are reinvested in the business or go to pay salaries and fringe benefits, which are deductible, and no money is left over for distributing dividends.

To avoid double taxation, corporations sometimes pay their shareholder-employees higher salaries instead of distributing income as dividends. But the IRS looks out for this trick and often audits corporations, claiming that executive salaries are not "reasonable" compensation. To prevent this charge, then, the corporation should consider the duties performed, the experience and/or special abilities of the employee, and how much other corporations pay for similar positions before determining "reasonable" compensation. In How to Run a Small Business , the J.K. Lasser Institute also advises that a corporation keep salaries somewhat consistent: "Fluctuating salaries, high salaries in high earning years and low salaries in lean years, will attract a review of salary payments by the Internal Revenue Service. A charge might be made, for example, that the high salary payments were in fact dividend payments."

Once a small business has been incorporated, the day-to-day management of business affairs should not be that much different than it was beforehand. It is important, though, that the business is treated like a corporation. The courts have been known on occasion to overlook a business's corporate status and find the shareholders/owners liable because the business was run as if it were still a sole proprietorship or partner-ship. Simply filing the articles of incorporation does not guarantee limited liability. In order to maintain corporate status in the law's eyes, these guidelines should be followed:

ACT LIKE A CORPORATION Before doing business, stock certificates should be issued to all stockholders, and a corporate record book should be established to hold the articles of incorporation, records of stock holdings, the corporation's bylaws, and the minutes of board and shareholder meetings. In addition, such meetings should be held regularly (once a year is the minimum requirement). In this way, the corporation can record all important actions taken and show that such actions were approved by a vote. It is also important to treat the corporation like the separate entity it is by keeping personal and corporate accounts separate. Whereas a small business owner may have previously used one account to pay the company's accounts and personal expenses, as a corporate shareholder, he now needs to receive a regular salary from the corporation, deposit it in a separate account, and pay his personal expenses from that account. In all respects, the corporation and owner must be treated as distinct individuals. Fred Steingold advises, "document all transactions as if you were strangers. If the corporation leases property to you, sign a lease." In addition, the corporation's full name (which should indicate the company's corporate status through use of "Inc." or an equivalent) must be used on all correspondence, stationary, advertising, phone listings, and signs.

ADEQUATE CAPITAL INVESTMENT AND INSURANCE COVERAGE It is important to protect the corporation against failure due to debts and lawsuits. In other words, simply trying to protect the owners' assets by becoming a corporation and neglecting to fortify the business can be viewed as reason to disregard a business's corporate status in a lawsuit. Therefore, enough capital should be invested in the corporation to handle all business activities. Likewise, if business activities pose a risk to employees or customers and reasonably priced insurance is available to protect against such risks, such coverage should be secured.

Byrd, Stephen, and Brett Richey. "The Choice of Entity for the Small Business Owner." Mid-Atlantic Journal of Business. December 1, 1998.

Handmaker, Stuart A. Choosing a Legal Structure for Your Business. Prentice Hall, 1997.

J.K. Lasser Institute. How to Run a Small Business. McGraw-Hill, 1994.

"New Ventures and Start-Ups: Which Form of Business Is Best for You?" Business Owner. January-February 1999.