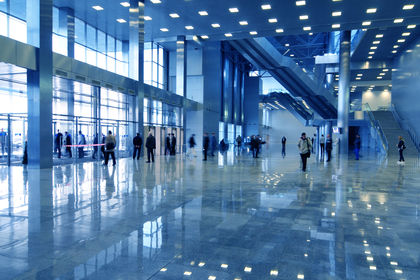 Corporate image, or reputation, describes the manner in which a company, its activities, and its products or services are perceived by outsiders. In a competitive business climate, many businesses actively work to create and communicate a positive image to their customers, shareholders, the financial community, and the general public. A company that mismanages or ignores its image is likely to encounter a variety of problems. "Reputation problems grow like weeds in a garden," Davis Young wrote in his book Building Your Company's Good Name. "Direct and indirect costs escalate geometrically."

Some of the warning signs that a business might have an image problem include high employee turnover, the disappearance of major customers, a drop in stock value, and poor relationships with vendors or government officials. If an image problem is left unaddressed, a company might find many of its costs of doing business rising dramatically, including the costs of product development, sales support, employee wages, and shareholder dividends. In addition, since the majority of consumers base their purchase decisions at least partly on trust, current and future sales levels are likely to suffer as well.

In businesses of all sizes, it is vital that managers recognize the importance of creating and maintaining a strong image, and that they also make employees aware of it. Corporate image begins within the offices of a company's managers. It should be based on the development of good company policies, rather than on controlling the damage caused by bad company policies. Young recommends that business owners and managers take the following steps toward improving their companies' image: focus on the firm's long-term reputation; base actions on substantive policies; insist on candor in all business dealings; and uphold the stakeholders' right to know. After all, he notes, a good corporate image can take years to build and only moments to destroy.

Several factors have contributed to the increasing importance of corporate image in recent years. For example, the business climate in the United States has become one of environmental complexity and change. This has forced many business enterprises to significantly alter their strategies to better compete and survive. The acceleration of product life cycles is another vital dimension of the turbulent business environment. Globalization has been still another catalyst in the rise of corporate image programs, as companies have sought ways to spread their reputations to distant markets. A related factor is that as a corporation expands its operations internationally, or even domestically, through acquisitions, there is a danger that its geographically dispersed business units will project dissimilar or contrary images to the detriment of corporate synergy.

A final factor stimulating the current interest in corporate image is society's growing expectation that corporations be socially responsible. Many of today's consumers consider the environmental and social image of firms in making their purchasing decisions. Some companies have recognized this reality and reaped tremendous benefits by conducting themselves in a socially and environmentally responsible manner. Some of these companies act out of genuine altruism, while others act out of a simple recognition of the business benefits of such behavior.

The objective in managing corporate image is to communicate the company's identity to those audiences or constituencies that are important to the firm, in such a way that they develop and maintain a favorable view of the company. This process involves fashioning a positive identity, communicating this identity to significant audiences, and obtaining feedback from the audiences to be sure that the message is interpreted positively. An unsatisfactory image can be improved by modifying corporate communication, re-shaping the corporate identity, or both.

CORPORATE IDENTITY Corporate identity—the reality and uniqueness of the organization—may be broken down into four component parts: corporate strategy, corporate culture, organizational design, and operations. Strategy is the overall plan that determines the company's product/market scope and the policies and programs it chooses to compete in its chosen markets. Corporate culture is the shared values and beliefs that the organization's members hold in common as they relate to each other, their jobs, and the organization. It defines what the firm's personnel believe is important and unimportant, and explains to a large degree why the organization behaves the way it does.

Organizational design refers to the fundamental choices top managers make in developing the pattern of organizational relationships. It encompasses issues such as whether basic tasks should be organized by function or product division, the company's overall configuration, the degree of decentralization, the number of staff personnel, the design of jobs, and the internal systems and procedures. Operations, the fourth and final component of corporate identity, is the aggregate of activities the firm engages in to effect its strategy. These activities become part of the reality of the corporation and can influence its identity in a wide variety of ways.

CORPORATE IMAGE Corporate image is the reputation of the firm with the various audiences that are important to it. These groups that have a stake in the company are known as stakeholders. Stakeholders are affected by the actions of the company and, in turn, their actions can affect the company. Consequently, its image in the eyes of its stakeholders is important to the company. The principal stakeholders with which most large corporations must be concerned are: customers, distributors and retailers, financial institutions and analysts, shareholders, government regulatory agencies, social action organizations, the general public, and employees.

The image that stakeholders have of the company will influence their willingness to either provide or withhold support. Thus, if customers develop a negative perception of a company or its products, its sales and profits assuredly will decline. Government regulatory latory agencies, another important set of stakeholders, are required by law to monitor and regulate firms for specific, publicly defined purposes. Nevertheless, these agencies have considerable discretion in how they interpret and apply the law. Where they have a positive perception of the firm, they are likely to be much less censorious.

Obviously, each of the various stakeholder groups is likely to have a somewhat different perception of the corporation because each is concerned primarily with a different facet of its operation. Thus, consumers are principally interested in the price, quality, and reliability of the company's products and services. Financial institutions are concerned with financial structure and performance. Employees are mainly concerned with wages, working conditions, and personnel policies. Logically, then, a company should tailor its communication to each stakeholder group individually to address the special concerns of that group.

However, maintaining a consistent image among the several stakeholder groups is also vital. Although it is prudent to stress different facets of the firm's identity to its various publics, the firm should avoid projecting an inconsistent image, because the concerns and memberships of different stakeholder groups often overlap. For instance, the financial community and the shareholders would have many of the same financial and strategic concerns about the company. In fact, many shareholders rely heavily on the advice of experts from financial institutions. Similarly, both employees and the general public have an interest in the overall prestige of the firm and the reputation of its products. A social action group's criticism, whether economically effective or not, is bound to influence some customers and affect the company's public reputation. A regulatory agency such as OSHA would focus narrowly on the firm's safety record and policies, but the company's employees and their labor unions also have a stake in these matters.

CORPORATECOMMUNICATION Corporate communication provides the link between corporate identity and corporate image. It should be defined in the broadest possible sense, because companies communicate identities in many different ways. Communication can include almost anything the company does, from the way telephones are answered to the involvement of company employees in community affairs. Some of the principal sources of corporate communication include company and product names and logos, formal statements (mission statements, credos, codes of ethics, annual reports, advertising copy, and company slogans), and behavior during important events. These events encompass scheduled events such as open houses and anniversary sales as well as unscheduled events such as lawsuits or negative press coverage.

FEEDBACK Feedback is essential to the management of corporate image. Business owners and managers need accurate information on how they and their company are perceived if they are to make sound decisions. Ideally, feedback should be continuous. As a practical matter, continuous feedback can be elicited from salespeople, clients, employees, and other local business owners. Based on such input, modifications may be made in the company's communication methods or, if warranted, a formal study of the corporate image may be initiated. In addition to systematically utilizing internal sources, it is prudent to undertake a serious review of the business's reputation (both internally and externally) on a regular basis.

Young, Davis. Building Your Company's Good Name: How to Create and Project the Reputation Your Organization Wants and Deserves. AMACOM, 1996.