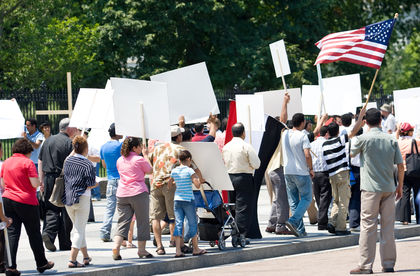 An employee strike is an episode wherein a company's work force engages in a work stoppage in an effort to elicit changes from its employer in such areas as wages, benefits, job security, and management practices. Strikes are typically engineered by labor unions, whose memberships accounted for approximately 15 percent of all employees in the United States in the late 1990s (about 10 percent of all private sector employees). Union strikes are usually associated with large companies, but they can be implemented against smaller employers as well. Given the enormous financial stakes of such actions, small business owners need to be prepared in the event that an employee strike is called against them.

The National Labor Relations Board (NLRB) provides legal protections for two kinds of strikes, economic strikes and unfair labor practices strikes. The former is a strike that is undertaken by workers in order to garner improvements in their wages, benefits, hours, or working conditions. An unfair labor practices strike is an action that has far more serious legal implications for small business owners. This kind of strike occurs in instances where the employer allegedly violates NLRA rules that protect workers during collective bargaining. "Typical violations that prompt an unfair labor practices strike include refusing to pay benefits when they're due, discharging an employee for engaging in union activities, and refusing to bargain in good faith," reported J.D. Thorne in Small Business Reports. "An unfair labor practices strike not only threatens a loss of business, but also requires that you return picketing workers to their jobs when the strike ends. Therefore, you must fire loyal replacement workers who crossed the picket line to work—and helped keep your business afloat." Businesses that do not do so are liable for back pay starting on the date that striking workers made their unconditional offer to return to work.

Given the added risks associated with an unfair labor practices strike, then, Thorne contended that "the most important aspect of managing an economic strike—the most common type—is to prevent it from becoming an unfair labor practices strike." Thorne noted that employer actions that could trigger this transformation include blatant ones, such as discharging an employee for engaging in his or her right to strike or withholding benefits (earned vacation time, pension-plan eligibility, etc.) as well as more subtle ones that nonetheless violate the National Labor Relations Act. The issue of communications with union members, for instance, is rife with rules that can ensnare the unknowing small business owner. These communication rules apply both to the pre-strike and strike periods. Following are specific guidelines that small businesses should adhere to in negotiations:

The beginning of an employee strike is almost always a difficult period for small business owners. The adversarial nature of such actions can be jarring for company leaders who are unfamiliar with strikes, and the walk-out itself can threaten small-and midsized business owners with devastating economic consequences (large companies can be hurt by strikes, too, of course, but their very existence is not usually jeopardized). Given this reality, small business owners and their management teams must take steps to ensure that their companies will be able to continue their operations during the strike. As Brenda Paik Sunoo wrote in Personnel Journal, "a strike will inevitably pose challenges in many areas: managing contingent workers; setting up communication between management and all employees; maintaining customer service; establishing interim policies regarding benefits, overtime, vacations, and sick leave; and bolstering non-striking employees' morale. Clearly, those that prepare well in advance will suffer the least trauma during and after a labor dispute."

Indeed, business experts universally agree that advance planning is key to managing a strike. They note that few companies can claim that they were caught flat-footed by a work stoppage. Most strikes occur when labor contracts expire, and even those that do not take place on such a specific date typically provide management with plenty of warning signs. Businesses that prepare for contract expirations and other potential strike periods by drawing up detailed contingency plans in advance will be much better equipped to weather a strike than will those firms that wait until the last minute. In recognition of this reality, Risk Management noted in 1998 that increasing numbers of companies have created management teams—sometimes called strike contingency planning teams (SCPTs)—to address potential strike issues.

Advance preparation efforts should cover a broad spectrum of operational areas. For example, businesses should have a plan in place to put together a contingent work force, whether comprised of replacements, non-striking employees (often supervisory personnel), or a combination of the two. A company that maintains information on recent job applicants, for example, may find itself better positioned to form a contingent work force than a firm that neglects to do so. Contingent work forces will also need training on a variety of issues, from duties to customer relations to legal matters (non-striking personnel already employed by the company may well need this training as well, since they will in many cases be undertaking unfamiliar tasks and interacting with customers and suppliers with whom they may not be familiar. Appropriate training programs should be in place well before a strike, not cobbled together after a strike actually occurs. Employers will also have to prepare interim policies governing various human resource issues for both striking and non-striking workers.

Companies facing strike actions should also make sure that their customers and suppliers are notified at appropriate times of that possibility. If your company suddenly announces to a major customer that your facility has been hit with a strike without providing that customer without any prior warning, you are likely to lose that customer for good, even after the labor dispute has been resolved. Businesses facing strikes should also make preparations for alternative service to valued clients and customers.

Another key to successful strike management, say labor experts, is for management to maintain a professional stance throughout. Many labor disputes disintegrate into intensely negative clashes, with repercussions that are felt long after the strike itself has been settled. Small business owners should do their best to prevent negotiations from becoming acrimonious. Owners who are capable of empathy with their striking employees' concerns about job security and economic wellbeing will be better able to manage this than will those who automatically dismiss all work stoppages as solely an outgrowth of union greed.

Finally, business owners should plan ahead to make sure that they have adequate security if a strike takes place. "Strikes, by their very nature, are adversarial," stated Sunoo. "They often are accompanied by disruptions in service and product delivery, and sometimes even violence." Savvy businesses will contact local legal and governmental authorities in advance to discuss issues such as picket lines, responses to disturbances, etc. In addition, businesses at risk of being the target of a work stoppage will often need to hire security forces to monitor the premises and protect their contingent work force. The role of security is twofold, said one security expert in an interview with Personnel Journal: 1) providing managers and non-striking employees with assurances that they can go to work without being injured, and 2) gathering evidence of any strike-related misconduct on the part of strikers for later use in legal proceedings.

Companies seeking security service have a number of options from which to choose, including their own personnel, local off-duty law enforcement personnel, and local security firms that provide security guards. Experts recommend that companies seeking security help look to firms with previous strike experience and avoid local security firms unless they can get assurances that none of their guards have any meaningful social or familial relationship to any of the strikers.

Caponigro, Jeffrey R. The Crisis Counselor: The Executive's Guide to Avoiding, Managing, and Thriving on Crises that Occur in all Businesses. Barker Business, 1999.