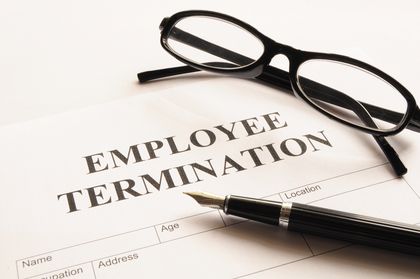 Employee termination is the process by which an organization ends an individual's employment against his or her will. Termination may occur "for cause," examples of which include poor job performance, lack of "fit" with the organization, inability to perform job responsibilities, conflict with managers or other employees, or misconduct. Many instances of employment separation, however, can be attributed to developments over which the fired employee has no control, such as restructuring, downsizing, relocation, or acquisition (known as a reduction in force).

It is important for small businesses, perhaps even more so than large ones, to terminate employees when such action is warranted. Small firms cannot afford to keep unproductive employees because of the effect their poor performance can have on the company's results, as well as on the motivation level of more talented workers. "If you fail to purge chronic poor performers, the best [performers] will either believe that you condone lackluster performance, or assume that you don't know the difference. Being the best, they will only want to associate with the best," according to Martin Yate in his book Keeping the Best.

When firing is necessary, small businesses must handle the situation properly to avoid numerous possible pitfalls, including a reduction in morale and productivity among remaining employees, a decline in the company's public image, and difficulty in recruiting new employees. "Do it the right way, and there's no lasting negative effect on the company or the person who is exiting. Do it the wrong way, and the fired employee may have a very difficult time finding a new job and you and your company may end up in court," Richard S. Deems explained in his book How to Fire Your Friends. There are numerous steps a small business can take to reduce the negative impacts of employee termination.

Although employees retained their employmentat-will rights, employers' rights to terminate workers at their discretion began to erode in the 1930s. The federal Wagner Act of 1935 made it illegal for companies to fire employees because of union activity. Sub-sequent laws and court decisions during the mid-twentieth century reflected increasing concern about "wrongful discharge," implying that circumstances do exist in which it is legally wrong for a company to fire a worker. During the 1960s and 1970s, particularly, a number of new laws and regulations were enacted to protect workers from wrongful discharge in all types of cases, including those related to bias, whistle blowing, and trait-related factors.

Employment-at-will remained theoretically intact during the 1980s and early 1990s. A company could legally fire an employee without any reason whatsoever, or even for some arbitrary reason that had nothing to do with the worker's performance. Doing so, however, would likely leave the company open to legal action on the grounds of age, disability, race, or sex discrimination (or some other type of discrimination against a legally protected minority), or for defamation of character, breaking an implied contract, or some other infraction that could be construed by the courts as constituting wrongful discharge. As a result, the employee termination process has become more complex and more formalized in most organizations.

Behavior-related dismissals involve a termination of an employer-worker relationship by the employer as a result of the actions of the employee. Common behaviors that lead to terminations, in rough order of prevalence, include: absenteeism and tardiness; unsatisfactory performance; lack of qualifications or ability; changed job requirements; and gross misconduct, which might involve drug abuse, stealing, or other breaches of company or public policy. The term "behavior-related" distinguishes this type of termination from trait-related dismissals, which are based on immutable characteristics of the employee, such as color of skin or physical disability. Trait-related terminations may be legal if the employer can prove that the trait keeps the employee from performing a job satisfactorily. However, they are uncommon.

Employers are generally allowed by law to terminate workers based on any type of behavior they deem unacceptable (or, technically, for no reason at all). However, laws and court decisions have protected some types of behavior when the employer's retaliatory action is deemed: 1) a violation of public policy; 2) a violation of an implied contract between the employer and the employee; or 3) an act of bad faith. An act of bad faith is vaguely defined, and is simply a recognition of an employer's duty to treat employees fairly. For example, it might be considered illegal for a company to fire a worker because he refused to engage in an activity that a reasonable person would consider excessively dangerous or hazardous.

One illustration of a public policy violation would be a company that fired a worker because she refused to engage in an unlawful act, such as falsifying public financial documents or giving false testimony in court. Another public policy violation would be the firing of an employee because he exercised a statutory right, such as voting in an election or worshiping at a church. A third type of infraction in this category would be dismissal of an employee for reasons stemming from her exercising a right to perform an important public obligation.

Violations of implied contracts occur when a company dismisses a worker despite the existence of an insinuated promise. For example, if an employer conveys to a worker that he will receive long-term employment in an effort to get the employee to take a job, it could be liable if it fired the worker without what the courts deem just cause or due process. Implied contracts often emanate from interviews, policy manuals, or long-term patterns of behavior by the employer in a relationship with an employee.

Even when an employer acts in good faith and does not violate the public trust or an implied contract, it can be legally liable for dismissing a worker for other reasons. Specifically, a business may be found liable if it cannot prove that: 1) its decision to dismiss an employee is not founded on bias against a protected minority; or 2) the firing does not produce inequitable results. Suppose, for instance, that a company decided to fire all managers who did not have a college degree. Doing so, however, resulted in the dismissal of a disproportionate number of legally protected minorities from its work force. The company could be held liable if it could not show that having a college degree was necessary to effectively execute the duties of the position.

STEPS IN A BEHAVIOR-RELATED TERMINATION Partially because of the legal risks inherent in dismissing employees, most companies terminate workers for behavior-related causes only after administering a progressive disciplinary and counseling process. Besides legal reasons, studies show that most companies try to correct behavior out of a perceived moral obligation to the employee. Furthermore, many employers benefit economically from correcting employee behavior, rather than terminating workers, because of the high costs of employee turnover.

Correctional efforts do not always succeed, however. In instances when termination does prove necessary, business experts cite several basic steps that employers can take to ease the blow for the targeted employee, minimize damage to workplace morale and community standing, and shield themselves from legal liability. These steps include:

Prepare an information package for the terminated employee that outlines all elements of any severance package, including benefits and assistance options. Depending on laws and company policies, the company may provide severance pay, unemployment compensation, compensation for earned vacation days, career and placement counseling, ongoing health insurance, or other post-termination benefits.

Reductions in force (RIF)—also known as work force reductions, downsizing, right-sizing, restructuring, and reorganization—may include a number of methods of eliminating worker hours, including layoffs. Employee terminations in such cases are usually the result of surplus labor caused by economic factors, changing markets, poor management, or some other factor unrelated to worker behavior. Because work force reductions make a company vulnerable to many of the same legal risks inherent in behavior-related terminations, companies usually terminate workers by means of a carefully planned and documented process. The process is typically conducted in two stages: 1) selecting the workers to be dismissed and then terminating them according to the above process; and 2) providing benefits to ease the transition, including severance packages, unemployment compensation, and outplacement services.

Selecting and terminating employees is handled carefully because most profit-maximizing organizations are obviously concerned about losing talent or diluting the effectiveness of the company. But care must also be taken to ensure that the reductions do not violate state and federal laws. As with behavior-related terminations, downsizing terminations cannot be based on bias against protected minorities, or even unintentionally result in an inequitable outcome for a protected group. In fact, extensive legislation exists to protect disabled workers, racial minorities, workers over the age of 40, women, and other groups.

In addition to bias-related laws, moreover, companies must comply with a battery of laws specifically directed at corporate layoffs. For example, the federal Worker Adjustment and Retraining Notification (WARN) Act of 1988 requires companies with 100 or more employees to file at least 60 days prior notice before conducting mass layoffs or work force reductions. Among other stipulations, the notice must be in writing and addressed to employees and specified government workers.

The second stage of the downsizing process, outplacement, is also heavily influenced by legislation aimed at protecting employees. But it is also used to maintain the morale of the work force and to enhance the public image of the company conducting the work force reduction. Outplacement usually includes two activities: counseling and job search assistance. Counseling occurs on both the individual and group levels. Both are necessary to help the displaced worker 1) develop a positive attitude; 2) correctly assess career potential and direction, including background and skills, personality traits, financial requirements, geographic constraints, and aspirations; 3) develop job search skills, such as resume writing, interviewing, networking, and negotiating; and 4) adjust to life in transition or with a new employer.

Many companies assist with the job search by hiring a job-search firm to help their fired employees find new work. In addition to providing some or all of the counseling services described above, job-search companies act as brokers, bringing together job hunters and companies looking for employees. Job-search companies can expedite the job hunting process by eliminating mismatches from the interview process and by helping both parties to negotiate employment terms. In some cases, the former employer will reimburse job hunting costs as part of the severance package of benefits.

Deems, Richard S. How to Fire Your Friends: A Win-Win Approach to Effective Termination. Media Publishing, 1989.

Morin, William J., and Lyle Yorks. "Good News about Firing: It Can Benefit Everyone." Success. June 1990.

Yate, Martin. Keeping the Best: And Other Thoughts on Building a Super Competitive Workforce. Adams, 1991.