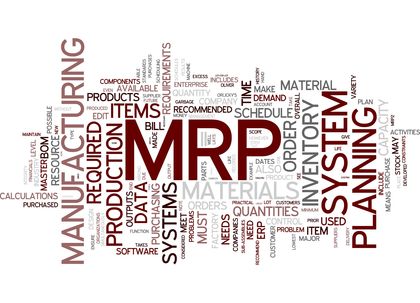 Material requirements planning (MRP) is a computer-based inventory management system designed to assist production managers in scheduling and placing orders for dependent demand items. Dependent demand items are components of finished goods—such as raw materials, component parts, and subassemblies—for which the amount of inventory needed depends on the level of production of the final product. For example, in a plant that manufactured bicycles, dependent demand inventory items might include aluminum, tires, seats, and derailleurs.

The first MRP systems of inventory management evolved in the 1940s and 1950s. They used mainframe computers to explode information from a bill of materials for a certain finished product into a production and purchasing plan for components. Before long, MRP was expanded to include information feedback loops so that production personnel could change and update the inputs into the system as needed. The next generation of MRP, known as manufacturing resources planning or MRP II, also incorporated marketing, finance, accounting, engineering, and human resources aspects into the planning process. A related concept that expands on MRP is enterprise resources planning (ERP), which uses computer technology to link the various functional areas across an entire business enterprise.

MRP works backward from a production plan for finished goods to develop requirements for components and raw materials. "MRP begins with a schedule for finished goods that is converted into a schedule of requirements for the subassemblies, component parts, and raw materials needed to produce the finished items in the specified time frame," William J. Stevenson wrote in his book Production/Operations Management. "Thus, MRP is designed to answer three questions: what is needed? how much is needed? and when is it needed?"

MRP breaks down inventory requirements into planning periods so that production can be completed in a timely manner while inventory levels—and related carrying costs—are kept to a minimum. Implemented and used properly, it can help production managers plan for capacity needs and allocate production time. But MRP systems can be time consuming and costly to implement, which may put them out of range for some small businesses. In addition, the information that comes out of an MRP system is only as good as the information that goes into it. Companies must maintain current and accurate bills of materials, part numbers, and inventory records if they are to realize the potential benefits of MRP.

The master schedule outlines the anticipated production activities of the plant. Developed using both internal forecasts and external orders, it states the quantity of each product that will be manufactured and the time frame in which they will be needed. As Stevenson explained, the master schedule separates the planning horizon into time "buckets," which are usually calendar weeks. The schedule must cover a time frame long enough to produce the final product. This total production time is equal to the sum of the lead times of all the related fabrication and assembly operations. It is important to note that master schedules are often generated according to demand and without regard to capacity. An MRP system cannot tell in advance if a schedule is not feasible, so managers may have to run several possibilities through the system before they find one that works.

The inventory records file provides an accounting of how much inventory is already on hand or on order, and thus should be subtracted from the material requirements. "The inventory records file is used to store information on the status of each item by time period," Stevenson noted. "This includes gross requirements, scheduled receipts, and expected amount on hand. It also includes other details for each item, such as supplier, lead time, and lot size."

As Stevenson explained, the main outputs from MRP include three primary reports and three secondary reports. The primary reports consist of: planned order schedules, which outline the quantity and timing of future material orders; order releases, which authorize orders to be made; and changes to planned orders, which might include cancellations or revisions of the quantity or time frame. The secondary reports generated by MRP include: performance control reports, which are used to track problems like missed delivery dates and stock outs in order to evaluate system performance; planning reports, which can be used in forecasting future inventory requirements; and exception reports, which call managers' attention to major problems like late orders or excessive scrap rates.

Although working backward from the production plan for a finished product to determine the requirements for components may seem like a simple process, it can actually be extremely complicated, especially when some raw materials or parts are used in a number of different products. Frequent changes in product design, order quantities, or production schedule also complicate matters. "The importance of the computer becomes evident when you consider that a typical firm would have not one but many end items for which it needs to develop material requirements plans, each with its own set of components," Stevenson explained. "Differences in timing of demands and quantities needed, revisions caused by late deliveries, high scrap rates, and canceled orders all have an impact on processing."

BENEFITS AND DRAWBACKS OF MRP

MRP systems offer a number of potential benefits to manufacturing firms. Some of the main benefits include helping production managers to minimize inventory levels and the associated carrying costs, track material requirements, determine the most economical lot sizes for orders, compute quantities needed as safety stock, allocate production time among various products, and plan for future capacity needs. The information generated by MRP systems is useful in other areas as well. "A range of people in a typical manufacturing company are important users of the information provided by an MRP system," Stevenson wrote. "Production planners are obvious users of MRP. Production managers, who must balance work loads across departments and make decisions about scheduling work, and plant foremen, who are responsible for issuing work orders and maintaining production schedules, also rely heavily on MRP output. Other users include customer service representatives, who must be able to supply customers with projected delivery dates, purchasing managers, and inventory managers."

MRP systems also have several potential drawbacks, however. First, MRP relies upon accurate input information. If a small business has not maintained good inventory records or has not updated its bills of materials with all relevant changes, it may encounter serious problems with the outputs of its MRP system. The problems could range from missing parts and excessive order quantities to schedule delays and missed delivery dates. At a minimum, an MRP system must have an accurate master production schedule, good lead time estimates, and current inventory records in order to function effectively and produce useful information.

Another potential drawback associated with MRP is that the systems can be difficult, time consuming, and costly to implement. Many businesses encounter resistance from employees when they try to implement MRP. For example, employees who once got by with sloppy record keeping may resent the discipline MRP requires. Or departments that became accustomed to hoarding parts in case of inventory shortages might find it difficult to trust the system and let go of that habit.

The key to making MRP implementation work is to provide training and education for all affected employees. "It is vital to identify whose power base will be affected by a new system," William J. Sawaya wrote in Industrial Management. "These persons must be converted or the system will fail. Key personnel must be convinced that they personally will be better served by the new system than by any other alternative." One way to improve employee acceptance of MRP systems is to adjust reward systems to reflect production and inventory management goals. "People generally act in their own self-interest," Sawaya noted. "If the performance measures that are used in determining compensation and promotion do not adequately address materials management, then no system in the world can significantly improve the situation."

In the 1980s, MRP technology was expanded to create a new approach called manufacturing resources planning, or MRP II. "The techniques developed in MRP to provide valid production schedules proved so successful that organizations became aware that with valid schedules other resources could be better planned and controlled," Gordon Minty noted in his book Production Planning and Controlling. "The areas of marketing, finance, and personnel were affected by the improvement in customer delivery commitments, cash flow projections, and personnel management projections."

Minty went on to explain that MRP II "has not replaced MRP, nor is it an improved version of it. Rather, it represents an effort to expand the scope of production resource planning and to involve other functional areas of the firm in the planning process," such as marketing, finance, engineering, purchasing, and human resources. MRP II differs from MRP in that all of these functional areas have input into the master production schedule. From that point, MRP is used to generate material requirements and help production managers plan capacity. MRP II systems often include simulation capabilities so managers can evaluate various options.