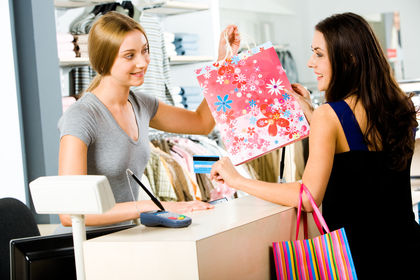 The sales commission is a method of compensating salespeople for the services they provide to their employer. Under so-called "straight" commission arrangements, the salesperson receives a previously agreed-upon percentage of the revenue brought in by a sale that he or she makes. Commission arrangements can be used for both service and product sectors. Some employers, however, choose to compensate their salespeople via straight salaries, thus compensating them in the same way as other employees, or via a combination of salary and commission.

The chief advantage associated with utilizing a straight commission arrangement is that it gives sales-people a major incentive to work hard on behalf of the company. But detractors contend that the compensation uncertainties associated with such plans sometimes make it difficult to secure good salespeople, and that their complete dependence on commissions may lead them into bad business habits. Even detractors, however, admit that commission set ups do provide salespeople with meaningful incentive to work hard. As a result, the majority of businesses that maintain a sales force use some combination of base salary and commission—also known as incentive pay—to compensate their salespeople.

"Because selling is so difficult, salespeople need to be trained, supported, and, above all, motivated," confirmed The Portable MBA in Entrepreneurship. "They need sales literature, administrative support to send out promotional material, and presentation graphics. They also need incentives that work—the right combination of commissions, prizes, stock, and whatever else you dream up. What are you doing in these areas and what do you plan for the future to upgrade your selling efforts?"

Some small- and mid-sized businesses have been known to balk at the size of the commissions that they pay to their top-level salespeople. Indeed, businesses that are engaged in industry sectors that are known for the sale and acquisition of so-called "big ticket" items, such as major equipment, or large-volume purchases may distribute commissions of several thousand dollars or more for a single sale. But most business consultants urge employers to remember that if they are doling out large commissions, that also means that those same salespeople are bringing in lots of business for the company. As the editors of The Portable MBA in Entrepreneurship indicated, "A good rule to follow is that when you find something that works, stay with it, even if it means paying what seems to be obscene amounts of cash. The best sales-people should earn top dollar."

STRAIGHT COMMISSION Under straight commission compensation arrangements, the salesperson receives a previously agreed-upon percentage of the selling price. The size of the percentage of the commission may vary from product to product. Business experts estimate that fewer than 15 percent of American firms pay their salespeople on a straight commission basis, although the majority of those companies that do choose this method of compensation indicate satisfaction with it. The primary benefit associated with this option, of course, is that it serves as a significant motivator to sales personnel. Moreover, companies that go this route are not forced to pay high salaries to salespeople during periods when sales are slow.

But Porter Henry and Joseph Callanan, authors of Sales Management and Motivation, indicated that there are potentially significant disadvantages associated with straight commission plans as well. In some cases, salespeople may concentrate on selling those products that are easiest to sell, paying comparatively little attention to high-profit specialty items or new products that are unfamiliar to prospective buyers. One solution to this problem is to pay higher commissions on those new or high-profit goods. Another problem associated with straight commissions is that salespeople may not put forth as much efforts after they reach a certain level of income. In such instances, Henry and Callanan recommend that businesses "adopt a sliding scale, with commissions increasing after a certain volume has been reached." Other potential disadvantages associated with straight commission compensation, say Henry and Callanan, include:

STRAIGHT SALARY The most frequent criticism of compensation plans that pay sales representatives a straight salary is that they eliminate the employees' incentive to perform. As one sales executive told Sales and Marketing Management, companies that offer aggressive incentive structures create hunger among their salespeople, while those that offer comfortable base salaries foster an environment of complacency. Other analysts contend, however, that this admitted drawback can be neutralized to some degree by creating a company culture that rewards top-notch sales performances with prompt salary increases and/or promotions.

SALARY PLUS COMMISSION OR OTHER INCENTIVES

This arrangement is by far the most common one employed by organizations that use salespeople. Proponents tout several meaningful advantages associated with compensation plans that combine base salaries with commissions:

Criticisms of compensation plans that combine salary with commissions or other incentives are usually framed not as rebukes of its philosophical underpinnings, but rather as laments concerning its execution. For example, some companies may offer only token commissions, which do little to foster aggressive salesmanship.

In addition to commissions, some companies choose to provide non-salary compensation to their sales force through expense accounts, automobile leasing, advances against future earnings (usually commission), or sales contests.

Expense accounts are common features in many industries. Indeed, salespeople in a wide range of industry sectors depend a great deal on business lunches, etc. to close deals. Moreover, salespeople often are responsible for large territories, which makes long hours of travel a fundamental element of their job description. Organizations that do not compensate such individuals with expense accounts—or free use of leased automobiles—are likely to have considerable difficulty finding and retaining gifted salespeople. Indeed, most prospective hires will view refusal to take care of expenses as a sure sign of company stinginess and an indication that the company's ownership may not be cognizant of basic business realities.

Sales contests are another popular tool used by business owners to encourage sales activities. Under these programs, sales personnel who meet certain sales goals are rewarded with cash bonuses, paid vacations, etc. But business experts contend that sales contests can have unintended consequences for organizations if they are poorly defined or structured so that only a small segment of the sales force is rewarded. Indeed, some organizations provide incentives only to a certain percentage of top-level performers. Such programs—whether commissions or sales contests—are usually implemented in hopes of creating a competitive environment, but all too often they have the opposite effect. "Sure, your top salespeople are thrilled about the program—for them, it most likely means another trip to Hawaii or Europe," wrote Melanie Berger in Sales and Marketing Management. "But for the vast majority of your sales force, the incentive is yet another opportunity to do one thing: lose. And nobody feels good about losing. All too often, executives planning incentive programs for their sales forces assume they need to motivate and reward their top performers—the ones who already generate the bulk of their business. Less successful—shall we say, average—players are ignored, left to remain, well, average."

In order to counteract the negative characteristics associated with traditional sales contests, many business consultants recommend that businesses instead institute so-called "open-ended" incentive programs. These programs are designed so that participants compete against their own past performances rather than their fellow salespeople. As one sales manager told Berger, "Very often with closed-ended programs [traditional programs in which salespeople compete against one another for a limited number of rewards], people use the excuse, 'Her territory is better than mine' or, 'They were lucky and closed a big sale; it was the right place at the right time.' The incentive programs that work the best are the ones that are considered fair. What's fair is to have people competing against themselves—that way you're being compared to what you've done in the past, not what the guy next to you is doing." In addition, Berger noted that open-ended programs can be shaped in two-tiered fashion so that a business's very best sales performers receive some extra recognition. For example, sales-people that increase their sales by 10 percent might receive a nice prize, while those that increase their sales by 20 percent would receive an even better one. Open programs, said Berger, can be used in place of closed programs so that "rather than getting better results from just a small number of salespeople, companies can potentially inspire improved performance from all of them. And that translates into increased sales and a stronger bottom line."

Berger did note, however, that there are two objections that are commonly raised to open-ended sales incentives. The first is that such initiatives cast greater uncertainty on sales budgeting efforts. After all, companies that offer an open program "don't know in advance how many winners they'll have or how many prizes they'll need to award." In addition, some observers contend that open programs actually can detract from the performance of a business's top salespeople. "If all reps have to do to win is increase sales by 15 percent, the top producers in an open-ended program could hit that mark well before the year is over, and coast the rest of the way," said Berger. But the impact of both of these negative attributes can be largely neutralized through careful planning (such as studying multi-tiered programs) and continuous monitoring.

Business researchers believe that companies will have to continually adjust their sales commission/incentives packages in the coming years in order to remain competitive, since the overall business environment is changing with such rapidity. For example, salespeople are now seen as more likely to move not only from business to business but also from industry to industry. "Salespeople, despite their market specialization, have one thing in common: They want to make lots of money," observed Michele Marchetti in Sales and Marketing Management. "And these high-performing people will seek out companies with competitive pay plans—regardless of the industry."

In addition, increased emphasis on customer satisfaction and increasing market share with current customers is likely to broaden the responsibilities of salespeople, who will in turn expect to be compensated appropriately. "Today's selling environment is frustrating and fascinating," said Marchetti. "Technology is propelling us into a new way of thinking about business strategy and the way we define success. As always, though, salespeople will do what they're rewarded for doing. That's why compensation plans have to keep up with the changing selling methods. Sales managers must motivate their reps to build real relationships between customers and company, in order to increase the share of each customer's business and to increase the value of each customer to the company."

Berger, Melanie. "When Their Ship Comes In: How to Create an Incentive Program that Motivates All of Your Salespeople—and Sends More Happy Winners on that Coveted Trip." Sales and Marketing Management. April 1997.

Marchetti, Michele. "Developing a Competitive Pay Plan: the Key—Benchmarking Your Reps' Compensation Against Other Industries." Sales and Marketing Management. April 1997.

Peppers, Don, and Martha Rogers. "The Money Trap." Sales and Marketing Management. May 1997.