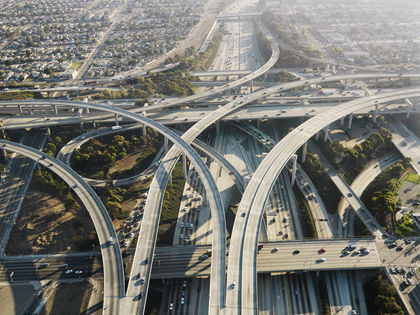 Transportation concerns the movement of products from a source—such as a plant, factory, or work-shop—to a destination—such as a warehouse, customer, or retail store. Transportation may take place via air, water, rail, road, pipeline, or cable routes, using planes, boats, trains, trucks, and telecommunications equipment as the means of transportation. The goal for any business owner is to minimize transportation costs while also meeting demand for products. Transportation costs generally depend upon the distance between the source and the destination, the means of transportation chosen, and the size and quantity of the product to be shipped. In many cases, there are several sources and many destinations for the same product, which adds a significant level of complexity to the problem of minimizing transportation costs. Indeed, the United States boasts the world's largest and most complex transportation system, with four million miles worth of roads, a railroad network that could circle the earth almost seven times if laid out in a straight line, and enough oil and gas lines to circle the globe 56 times.

There are five basic means of transporting products utilized by manufacturers and distributors: air, motor carrier, train, marine, or pipeline. Many distribution networks consist of a combination of these means of transportation. For example, oil may be pumped through a pipeline to a waiting ship for transport to a refinery, and from there transferred to trucks that transport gasoline to retailers or heating oil to consumers. All of these transportation choices contain advantages and drawbacks.

Air transport. Air transportation offers the advantage of speed and can be used for long-distance transport. However, air is also the most expensive means of transportation, so it is generally used only for smaller items of relatively high value—such as electronic equipment—and items for which the speed of arrival is important—such as perishable goods. Another disadvantage associated with air transportation is its lack of accessibility; since a plane cannot ordinarily be pulled up to a loading dock, it is necessary to bring products to and from the airport by truck.

According to Transportation and Distribution, air cargo remains a comparatively small segment of total freight transportation volume when measured by tonnage (12.5 billion domestic ton-miles of freight annually). But L. Clinton Hoch noted in the magazine that "access to air transportation is expected to become increasingly important since a growing number of customers (such as hospitals and electronic manufacturers) depend upon 'just in time' delivery systems as well as the increasing number of high-tech industries (such as computer manufacturers) adopting the 'build-to-order' strategy." These trends, coupled with increased pressure on consumer goods manufacturers to deliver products quickly to 1) meet customer expectations and 2) reduce inventory and other supply chain costs, are expected to "fuel the demand for expedited services," wrote Hoch. "Accordingly, competition is heating up among the major air cargo and express carriers who are building specialized hubs to handle larger aircraft and major sorting facilities."

Railways. The rail transportation network in the United States included about 120,000 miles of major rail lines in the late 1990s, on which carriers transported an estimated 1.3 million tons of freight annually. Trains are ideally suited for shipping bulk products, and can be adapted to meet specific product needs through the use of specialized cars—i.e., tankers for liquids, refrigerated cars for perishables, and cars fitted with ramps for automobiles.

Rail transportation is typically used for long-distance shipping. Less expensive than air transportation, it offers about the same delivery speed as trucks over long distances and exceeds transport speeds via marine waterways. In fact, deregulation and the introduction of freight cars with larger carrying capacities has enabled rail carriers to make inroads in several areas previously dominated by motor carriers. But access to the network remains a problem for many businesses.

Motor carriers. Accessible and ideally suited for transporting goods over short distances, trucks are the dominant means of shipping in the United States. In fact, motor carriers account for approximately $120 billion in annual revenue, much of it due to local shipments (shipments to and from business enterprises in the same community or local region). This industry sector underwent tremendous change in the 1990s with the introduction of deregulation measures that removed most state and federal regulations in the areas of pricing and operating authority. "With few exceptions, motor carriers are now free to operate wherever they wish and to charge any rates that are agreeable to the shipper and the carrier," wrote Hoch, although he noted that trucks are still subject to federal laws on vehicle specifications and the parameters of the sanctioned truck routes of the Surface Transportation Assistance Act of 1982.

Water transport. Water transportation is the least expensive and slowest mode of freight transport. It is generally used to transport heavy products over long distances when speed is not an issue. Although accessibility is a problem with ships—because they are necessarily limited to coastal area or major inland waterways—piggybacking is possible using either trucks or rail cars. However, industry observers note that port terminal accessibility to land-based modes of transportations is lacking in many regions. The main advantage of water transportation is that it can move products all over the world.

Pipeline facilities. Most pipeline transportation systems are privately owned. Generally used for transport of petroleum products, they can also be used to deliver certain products (chemicals, slurry coal, etc.) of other companies. According to Transportation and Distribution, the nation's natural gas line networks include 276,000 miles of transmission pipe and more than 919,000 miles of distribution lines, which combine to deliver nearly 20 trillion cubit feet of gas on an annual basis.