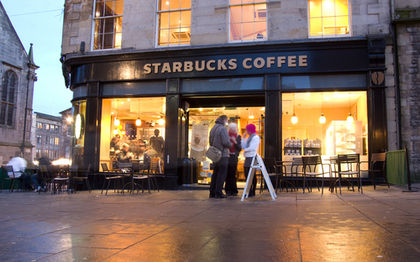 Publications: Pour Your Heart into It: How Starbucks Built a Company One Cup at a Time, 1997.

■ When Howard Schultz acquired Starbucks' assets in 1987, the company consisted of six retail and wholesale coffee shops in the Pacific Northwest. When Schultz gave up his position as CEO 13 years later to become chief global strategist, Star bucks cafés could be found all over Europe, the Middle East, and the Far East, as well as in over two thousand locations across North America. Though he often shunned prevailing wisdom, Schultz's original vision of providing specialty coffee and old-world charm to the masses eventually became a multibillion dollar reality.

Schultz grew up in the Carnisie housing projects of Brook lyn, where he was deeply affected by his father's struggle to provide for his family. Looking for a way to stand out and be successful, Schultz turned to sports and gained a football schol arship to Northern Michigan University in 1971. He was an unmotivated student, however, and didn't discover his fore-most talent until he took a sales position with the Xerox Corporation. Schultz flourished in competitive environments and rose quickly when he joined the housewares company Ham marplast in 1979. As a general manager with Hammarplast he traveled to Seattle in 1981 to investigate a small coffee company that was ordering an extraordinary number of speciallyshaped coffee filters. This was his first encounter with Star-bucks.

Schultz was immediately captivated by the passion of Star-bucks' founders, Gordon Bowker and Jerry Baldwin, who talked about coffee as if they were discussing the various qualities of fine wine. Fired with enthusiasm, Schultz soon talked them into hiring him as their director of retail operations and marketing. Despite the misgivings of his family, Schultz gave up a respectable job in Manhattan to immerse himself in the arcane business of gourmet coffee. He even found himself attracted to the countercultural aura of Seattle that had given birth to the American coffeehouse. Most importantly he had found a business he could be passionate about, and he threw himself into it wholeheartedly.

On a buying trip to Italy in 1983 Schultz's growing obsession with coffee took another step with his discovery of Italian coffee bars, where the experience of enjoying espresso drinks was woven into the fabric of daily business and social life. Schultz thought that the coffee-bar experience could be the next evolutionary step for Starbucks in America; when the founders disagreed, he reluctantly left the company and opened his own Italian-style espresso bars in the Seattle area. He called his new enterprise Il Giornale, Italian for "daily." Three years later, in 1987, Il Giornale was successful enough for Schultz to find investors when the opportunity arose to buy Starbucks from Bowker and Baldwin.

Schultz had optimistically promised investors that Star-bucks would expand rapidly, even though Seattle was already filled with coffee stores and the rest of the country had yet to show interest in espresso drinks. During the new corporation's first year, expansion amounted to 15 additional stores; by 1992 there were nearly 150 Starbucks locations, including in such trendsetting cities as Chicago, Los Angeles, and San Diego. A markedly growing mail-order business paved the way for the Starbucks brand in many other areas outside of the Pacific Northwest, such that the only advertising the company needed was word of mouth.

While it might have seemed like Schultz was merely cashing in on a new fad for specialty coffee, he built for long-term success by acting on principles that were uniquely his own. The example of his father's struggles prompted him to offer health coverage to all employees who worked at least 20 hours per week in 1988. While he tried to maintain the atmosphere of the Italian coffee bar as much as possible, he was flexible enough to give in to American customers' requests for in-store seating and for nonfat milk in their lattes and cappuccinos.

In 1992, after the company had shown profits for two straight years, Schultz completed the initial public offering of Starbucks common stock on the NASDAQ national market. The following year Starbucks began its relationship with Barnes & Noble, which placed the company in the center of the growing trend toward combining coffeehouses with large bookstores. This combination was in line with Schultz's abiding vision of the coffeehouse experience, which was to provide an oasis for busy people in the midst of hectic and fragmented lives. He wanted to build the Starbucks brand into a trademark experience that people could trust.

Building that trust entailed ensuring Starbucks quality in every product that the company offered. The desire for impeccable quality control caused Schultz to reject franchising as a way of raising extra capital in the mid-1990s, when Starbucks expansion was at its peak. It did not hinder him from attaching the Starbucks name to a growing number of products, however. In 1994 Starbucks began to sell music CDs in its outlets in response to customers' requests to purchase the music they heard in the stores. In 1995 Schultz approved the development of Frappuccino, a cold milk and coffee drink that would prove popular in warmer climates. That same year Starbucks entered into partnership with Dreyer's to produce coffee-flavored ice cream.

In 1996 Starbucks expanded into the Far East with its first location in Japan. Against the predictions of market experts, the Japanese were eager to carry Starbucks cups as they walked down the street. Within a few years there would be locations in Singapore, Thailand, New Zealand, Taiwan, Malaysia, China, Korea, Kuwait, and even Lebanon. The increasingly global nature of Starbucks prompted Schultz to relinquish his CEO duties in 2000 in order to focus on larger worldwide issues as chief global strategist. Three years later Starbucks opened its thousandth Asia-Pacific store.

The global success of Starbucks allowed Howard Schultz to once again immerse himself in sports, the passion of his youth, with his purchase of the National Basketball Association's Seattle Supersonics in January 2001.

Schultz, Howard, Pour Your Heart into It: How Starbucks Built a Company One Cup at a Time , New York, N.Y.: Hyperion, 1997.